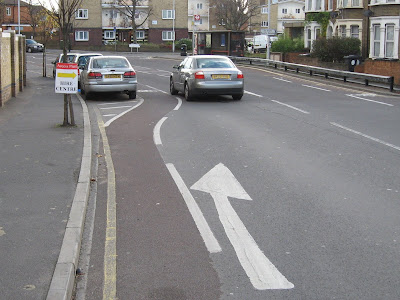 (Above) More pics from Church Road, Leyton, London E10 (A1006). It forms part of the London Cycle Network, with lovely little blue signs telling you so. Lanes like these make up the sort of crap network that the London Cycling Campaign (LCC) gives prizes for. "Waltham Forest was declared the winner for its innovative and extensive cycling facilities, which includes a 40-mile network of cycle lanes and quiet routes in the Borough." That dodgy statistic includes 20 miles of 'quiet routes' which consist of nothing more than car-cluttered back streets with traffic calming and some blue cycle signs attached to lamp posts, and on-road cycle lanes none of which are even 2 metres wide except for a handful of very short and unrepresentative sections.

The scene shown above is on a lethal bend, on an unpleasant 'A' road, where drivers break the speed limit. At the worst possible point, the transport planners decided to squeeze in parking bays, and force cyclists out into the centre of the carriageway, just where drivers are starting to lurch to the left to get round the bend. Car parking and car dependency come before the safety and convenience of cycling.

In reality there is ample room to build segregated infrastructure on the Dutch model, but no vision and no political will. Only infrastructure on the Dutch model will get us anywhere, but this is a message the LCC is signally failing to put across. But then it's not easy working out what the LCC actually stands for, once you've cut through the organisation's frothy optimism about the future. Segregation? Integregation? A bit of both? The answer appears to be integration, since the LCC’s stunted and unimaginative notion of re-designing streets for cycling to make them “cycle friendly” is this.

Needless to say, no cycle counts are ever taken on this road. The results would probably be too embarrassing. Nobody wants to measure failure, everybody is into spin. Well I'm telling you, you are never going to get mass cycling in London on crappy, dangerous cycle lanes like this. Even I prefer to avoid Church Road, Leyton, and I'm an experienced cyclist with nerves of steel.

(Below) And note that on the other side of the road there are crash barriers running alongside the cycle lane. Why is that? Because northbound drivers are going way beyond the speed limit and sometimes 'lose control' on the bend, crashing into the properties there. There is no traffic calming and no speed cameras. This is an 'A' road and drivers must be allowed to behave like maniacs if they want to. Traffic flow is what counts. The Mayor, Transport for London and the Commissioner of the Metropolitan Police wouldn't want it any other way. Neither would the government of Gordon Brown or, for that matter, David Cameron.

Oh yes, and there's a sign (from the motor trade, naturally) unlawfully attached to that tree in the foreground in the first pic. Waltham Forest council asserts it wants to be the Greenest council in London, yet it can't even be bothered to enforce the most rudimentary laws designed to keep streets clutter-free. 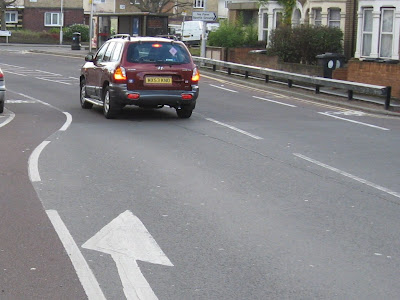 Posted by freewheeler at 09:05