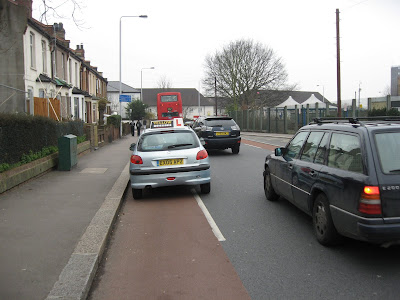 (Above) The first rule of learning to drive is that cycle lanes like these can be parked in quite legally seven days a week, at any time. This is the London Cycle Network, in which lots of small blue rectangular signs guide cyclists from one crappy, car-sodden location to the next one. Leyton Green Road.

(Below) A learner driver is instructed in the art of parking correctly in an ASL. Snaresbrook Road. 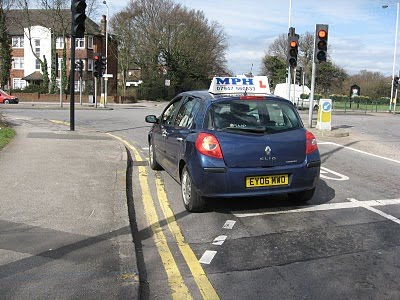 (Below) This probationer has passed her driving test and has understood the importance of driving into an ASL at red. 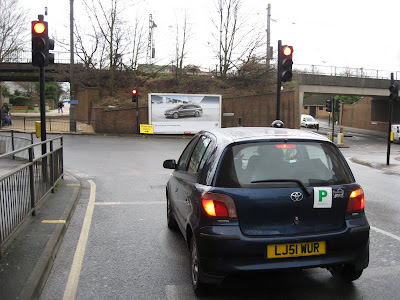 Traditional cycle campaigning in the UK is committed to improving the lot of vehicular cyclists in a motorised environment. Historically, this strategy has been a catastrophic failure in terms of boosting modal share. As every survey ever taken has shown, and as even most campaigners admit, fear of traffic remains by far the greatest deterrent to new and returning cyclists.

Maintaining our right to cycle on any road (other than motorways) must always be a top priority, for if we lose that right we can have no expectation of being treated any better elsewhere.

I'm pleased that most of the cycling community is united on this, but there have been exceptions and I think that this has fuelled the 'cycling is dangerous' myth that invariably leads to calls for cycling to be restricted. I also think that in the UK there remains a general recognition by the public at large that cyclists ought to be on the roads and we need to reinforce that perception and not weaken it.

At a public level we need to tackle the perception that has grown up over the past 20 years that cycling is inherently 'dangerous'. It isn't and it's easy to prove

On the one hand campaigners believe that the non-cycling majority must be persuaded that cycling is safe, that the more people who cycle the safer it gets, and that nervous individuals can be taught to cope through the medium of cycle training. But that still leaves the question of what to with motorists.

As many cyclists have noticed, there are quite a few drivers out there on the roads whose driving standards might be deemed antagonistic to cycling in various ways – even, you might say, dangerous.

One position on this is to blame cyclists. If cyclists are badly behaved (cycling through red lights or on footways, for example), then they cannot complain if drivers also behave badly. Cyclists must therefore win respect for cycling by demanding that all cyclists adhere to a car-centric status quo and obey rules designed to manage motor vehicle flow and parking. This kind of argument even gets embedded in local authority policy statements. Thus the London Borough of Redbridge Cycle Action Plan solemnly states that

Anti-social behaviour by cyclists undermines other efforts to develop cycling in Redbridge and creates conflict with other road users. Through engineering, education and enforcement, a mutual awareness and respect between cyclists, pedestrians and other road users will contribute to increasing the attractiveness of cycling.

By this twisted logic, what is holding back cycling in Redbridge is not a transport structure entirely built around the hegemony of the private car but naughty cyclists who have adapted to a deeply hostile cycling environment in ways deemed delinquent. But of course even if every cyclist in Redbridge scrupulously obeyed the rules this would not make one iota of difference in terms of ‘increasing the attractiveness of cycling.’ Redbridge is a deeply unattractive place to cycle for reasons which have nothing whatever to do with the behaviour of some cyclists. The same applies to all the other ‘Biking Boroughs’ including Merton, where, to give just one example,

The crossing at Kenley Road is a sheep-pen affair with a cycle time so long most people don't bother waiting.

However, a more mainstream argument within the vehicular cycling campaign community is that the behaviour of drivers must be directly addressed. There are, it is argued, three ways of doing this.

The first one is through ‘education’.

Many people are campaigning for better provision ON THE ROAD and educating drivers to be safer around cyclists. You have to admit that if cycling on the road was safer then there would be no/less need for segregated cycle routes.

Thus at last year’s Cyclenation conference in Edinburgh, Ian Aitken from Cycling Scotland passed on the thrilling news that the Action Plan for Scotland aspired to cycling accounting for 10% of all journeys by 2020 (the kind of delusional fantasy that gets cycle campaigners yapping excitedly and which will require the traditional amnesia when in nine years’ time cycling’s modal share in Scotland predictably remains at one per cent). Among the strategies cited to get more children cycling to school was a “Give Me Cycle Space” campaign – posters asking drivers to be nice to child cyclists. Education. (Doesn’t seem to work with the environment, incidentally – in one survey just 0.1% of drivers registered concerns about pollution and the environment.) 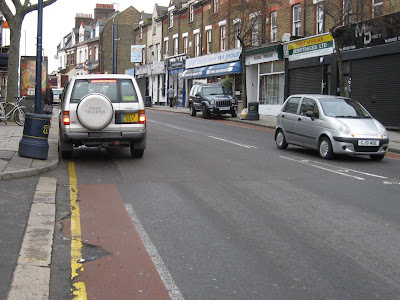 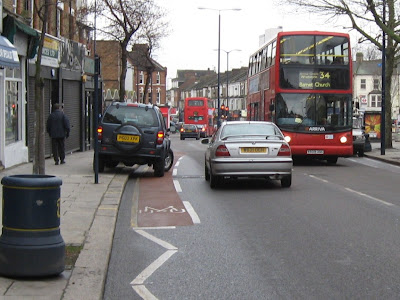 The second one is new legislation to change driver behaviour.

We recognise the role that good quality infrastructure has to play, but we feel that the elephant in the room is driver behaviour in the UK – something that has been addressed almost everywhere else in Europe but not here.

"stricter liability" laws which mean that Dutch and Danish drivers really do respect the priority of cyclists using cycle tracks at junctions.

There’s nothing wrong in principle with ‘strict liability’ legislation, but it has nothing at all to do with driver behaviour (and as I have previously argued, it is often misinterpreted as referring to criminal law). In reality Dutch drivers behave better to cyclists because they are virtually all cyclists, unlike Britain where two drivers out of three never cycle. ‘Strict liability’ was not the catalyst for mass cycling in the Netherlands – infrastructure was. The legislation came much later. The significant variations in modal share within both the Netherlands and Denmark are down to infrastructure, not legislation affecting insurance matters for drivers involved in collisions with cyclists.

(The idea that European drivers are nicer to cyclists than British ones might also be regarded as optimistic when they turn up in the UK – I don’t think the absence of ‘strict liability’ here is really why some foreign drivers behave like this.)

‘Strict Liability’ would, in any case, be a drop in the ocean in a car-centric society in which

danger from motor traffic – particularly to the non-motorised – is characterised by official tolerance… enforcement and sentencing policy for the majority of rule and law breaking driving [is] non-existent or lenient.

Compared to Health and Safety at work, maritime safety, aviation safety or rail safety, regulation of danger on the road is much more likely to be based on a “voluntary code” which involves accepting behaviour which endangers other road users.

The third proposal for changing the behaviour of British drivers is to make cycling part of the driving test. This is the CTC’s latest frothy enthusiasm.

This would create a generation of bike aware drivers whose experience of cycling in traffic would make them better disposed to accommodate their more vulnerable brethren.

Oh yeah? Since when did passing the driving test have any influence on the subsequent behaviour of drivers? There is none whatsoever that I know of. The idea that making learner drivers spend time cycling in traffic would create generations of cycling-friendly drivers is just the kind of crackpot delusion that appeals to establishment cycle campaigners. Their top priority remains cycling in traffic, and the demonstrable and continuing failure of this campaign strategy matters not a jot.

And of course even if we had more niceness by drivers, with lots of lovely posters reminding them to watch out for cyclists, and strict liability legislation, and cycling part of the driving test, these would have no impact whatever on volumes of traffic or car dependency. You would still be left cycling on streets like these. 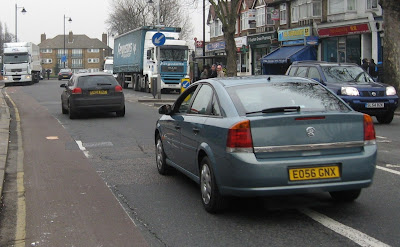 (Above) Conditions for cyclists on Lea Bridge Road, Leyton

(Below) Conditions for cyclists in the car-sick 'Biking Borough' of Redbridge. A113, Wanstead. 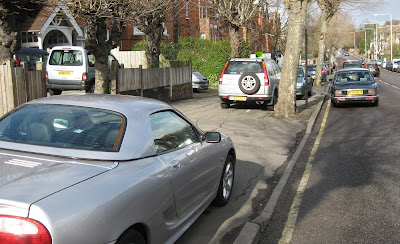 Posted by freewheeler at 13:34