The contraflow lane for cyclists on Queen Elizabeth Road, E17. At one end the markings have been obscured by resurfacing and not replaced. But then that kind of neglect is ubiquitous in the London Borough of Waltham Forest. And there's a protective bollard which has been lying there for weeks, presumably demolished by a heavy goods vehicle mounting the protective kerb for cyclists. These are symbolic of the Council's widespread neglect of the cycling infrastructure, but not in themselves a deterrent. The real problem lies at the other end - see below. 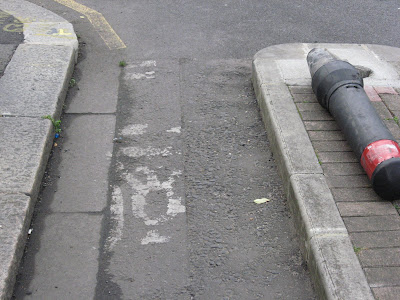 Water pours down the hill on Higham Hill Road, on that section between Forest Road and Winns Avenue. It does so on a permanent basis. Presumably a pipe has cracked beneath the carriageway. Instead of spending money on repairing the pipe, Thames Water just turns up the water pressure and forgets about it. Scenes like this are duplicated all over the Borough and the Council shows no inclination to get tough with Thames Water.

The result is that water flows down across the entrance to the contraflow cycle lane. It brings with it all kinds of rubbish and deposits it here. The entrance to the cycle lane is permanently coated in water, which is an obvious hazard if the temperature drops below freezing. Many cyclists using this facility will be coming down a hill and then turning sharp left into the lane. Even without the potential for ice the entrance is clogged with slimy, slippery leaves. And the drain is beginning to clog up, too, which will make this location even more waterlogged.

Happy cycling! And if you come off your bike here and break a leg I think you'll have a good case for compensation on the grounds of gross negligence by the highway authority. 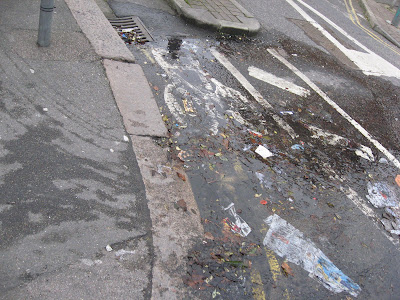 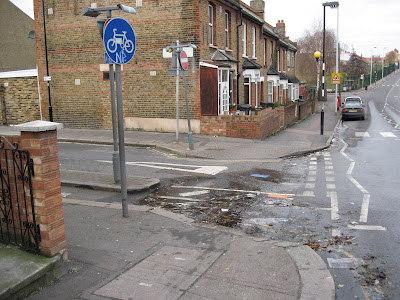 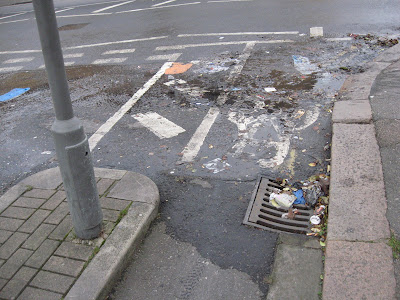