When it comes to cycle stands in the London Borough of Waltham Forest, it’s not just that provision is inadequate, with some cycle stands even being removed, or even that numerous stands are regularly obstructed, it’s that the people who design the provision seem to be idiots.

Are there no national guidelines, for God’s sake? The planners seem to like putting cycle stands as close as possible to street furniture and rubbish bins, which encourages obstruction via the dumping of refuse by traders. They also love locating cycle stands where they will get shat on by pigeons.

You’d think someone with an ounce of sense would realise that sticking a cycle stand under a tree is A BAD IDEA. But then no one involved in cycle provision in this Borough seems to have anywhere near as much as an ounce of sense. This is the recently installed cycle stand outside the HSBC bank in Hoe Street. I’ve never seen a cyclist use it. I wonder why? Could it have something to do with the daily blizzard of pigeon shit? 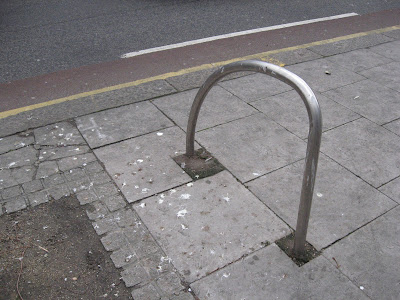 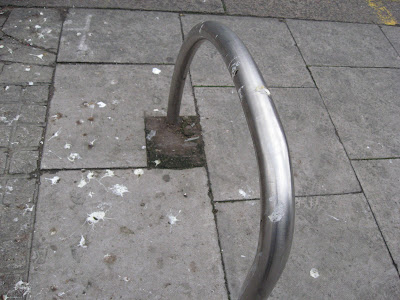 Posted by freewheeler at 13:31