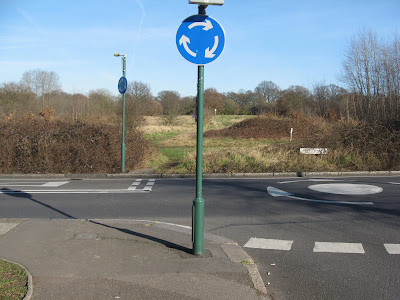 Every picture tells a story.

We live round the corner from Keynsham Avenue and people drive at ridiculous speeds around these roads. There are parked cars on both sides of the road and children live here, yet some people seem to get their kicks from driving at stupid speeds. These speeds, combined with the regular inability of drivers to give way at the mini roundabouts on Chingford Lane, surely mean that it is only a matter of time before someone gets seriously hurt. If you contact the police they say it's a council matter, and if you contact the council you don't get a response!! What will it take to get drivers to slow down?

A SLEEPING couple had the shock of their lives when a motorcyclist clipped a parked car outside their home and crashed his bike through their living room window. The crash is the latest in a spate of accidents along the road in Woodford Green, including one six months ago when a car crashed into the forest and caught fire. Mr Maloney and Miss Crowhurst have also had to re-build their front wall twice since 2003 as a result of road accidents.

Miss Crowhurst said: "People drive like maniacs around here, and it's only a matter of time before someone gets killed."

The photograph above shows the mini roundabout on Chingford Lane, from the junction with Lichfield Road (a recommended "quiet route" for cyclists), just a few metres from the junction with Keynsham Avenue. This area is on the borders of Woodford Green, and forms part of the northern tip of the London Borough of Waltham Forest.

The first problem is speed. Drivers race at excessive speed along Chingford Lane and don't slow for the mini roundabouts. They drive as if they had priority, even though priority belongs to the first person to enter an empty roundabout. Any car driver or cyclist emerging from a road like Lichfield Road and who has legal priority at the empty roundabout risks being hit by a lunatic belting along Chingford Lane at high speed.

But there is another problem for cyclists and pedestrians at this location. The two poles in the photograph inadvertently mark out the crossing point between Lichfield Road and the public path across Woodford Golf Course. Scroll down and let's take a closer look... 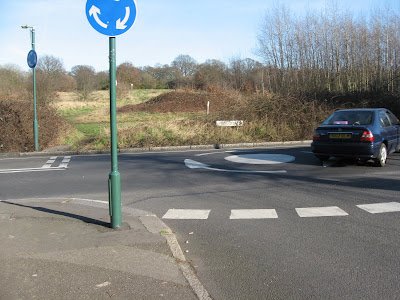 Just to the right of the green pole on the far side of the road is the start of the path. It is marked on Transport for London Local Cycling Guide 4 as a route with "provision for cyclists". Continue down to take a closer look at this fabulous provision. 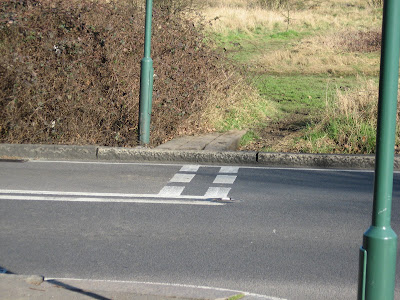 The photograph below shows the entrance to the path. As you can see the boards ends in briars and a mud swamp.

Let's bear in mind that this is either a public right of way or a public footpath (it is impossible to tell which because the Council's Draft Rights of Way Improvement Plan comes without a map, rendering it a meaningless document). The path is unsigned at either end. The path is also difficult to locate further on. Everything possible has been done to discourage cyclists and walkers from using it. And bear in mind that the Council is under a statutory obligation to improve "the accessibility of the rights of way to blind or partially sighted people and others with mobility problems".

There is also no dropped kerb on either side of Chingford Lane, and cyclists and pedestrians crossing at this point come into conflict with vehicles using the mini roundabout. It's a comprehensive disaster, where the lawless speeding driver is king, the Metropolitan Police show once again that they have little interest in cracking down on speeding drivers, and the Council does its own bit to render cycling and walking as difficult and dangerous as possible.

And there's one more thing... 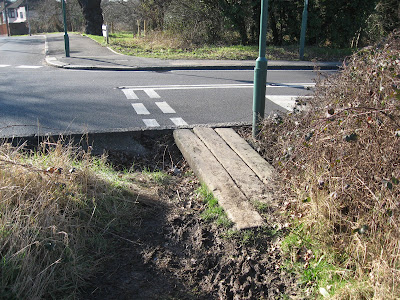 Yes, it's the usual neglect of the basic infrastructure. A sign obscured by vegetation. 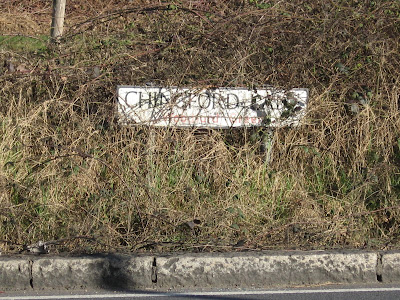 Posted by freewheeler at 10:15