I went to the Council's 'Car Free Day' on Sunday - and all I got was this lousy cycling brochure...

Okay, so 'Car Free Day' blocks off two streets in Leytonstone on a Sunday afternoon between 12 noon and 7 pm. There are lots of stalls and entertainments and the crowds flock to it. Local campaign groups get the chance to promote their campaigns. Nothing wrong with that. But at the end of the day 'Car Free Day' is just Greenwash because the London Borough of Waltham Forest pursues policies which encourage increased car ownership and use, besides shamefully neglecting the infrastructure used by cyclists and pedestrians. (More on this last aspect tomorrow.)

This part of the cycling brochure made me smile mirthlessly: 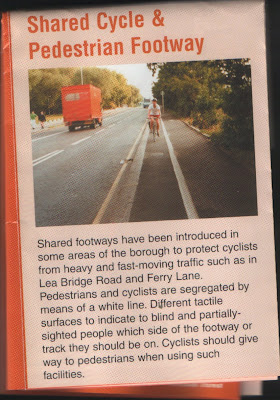 The staged photo in the brochure shows a cyclist heading towards Hackney down Lea Bridge Road. The reality is a little different on other parts of this route.

The section on the left of this shared route is for pedestrians and in the photo below you can see at a glance that the London Borough of Waltham Forest is passionate about protecting the interests of blind and partially-sighted pedestrians. (This photo was taken in June 2006, long before I ever thought of setting up this blog. And fifteenth months later the obstructive and unlawful sign, prominently displayed on one of the Borough's major routes, is still there.)

If you look very carefully you'll see that in the opposite carriageway there's a cyclist approaching who prefers to ignore the cycle lane and instead is using the carriageway. The later photos will show why. 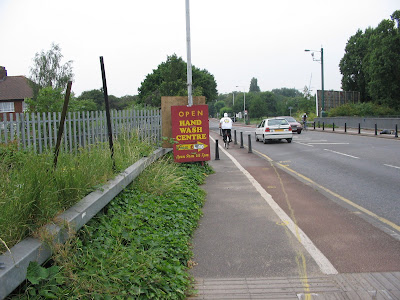 Below: a commercial sign is illegally positioned across the cycle lane. It is there day after day, week after week, month after month. No one in this crap Council cares. 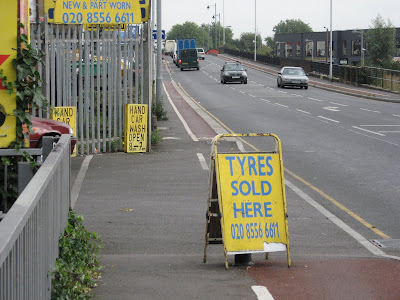 Approaching Orient Way the cycle lane shrinks to an impossibly slender section (with occasional obstructive clutter, as shown). What narrows it are blocks of wood. These are not temporary roadworks - these blocks have been here for years. They are put there to deter HGVs from parking on the bridge. The same blocks can be found on bridges over railway lines around the Borough. Apparently these bridges require strengthening and no one will take responsibility. The Council says it's Network Rail's job, and they say it is a local authority responsibility. In the meantime only cyclists and pedestrians are inconvenienced, so obviously there is no urgency at all. I expect these bridges will finally only get strengthened when one of them collapses and kills people. 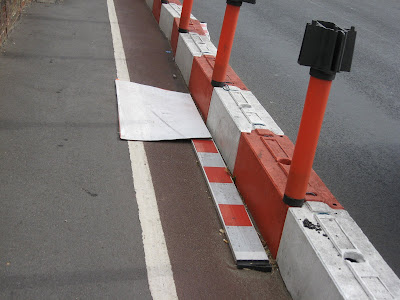 Posted by freewheeler at 12:25