The photo below shows a bus boarder on Wood Street. Bus boarders are designed to deter drivers from parking unlawfully at bus stops,obstructing them. The reasoning is that drivers won't park in locations which obstruct other motor traffic, and so the footway is extended to narrow the carriageway. The idea works but at a price. 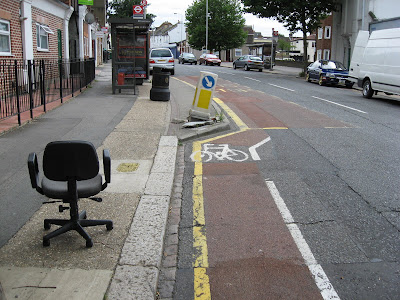 The objection to bus boarders of this type is that by building out the footway, cyclists are forced into the path of drivers. At a location like this (which faces in the direction of Whipps Cross roundabout)traffic speeds up after the congestion between Wood Street station and Forest Road. A survey taken at this point would undoubtedly reveal that large numbers of drivers were breaking the 30 mph speed limit. Apart from that there is the problem of inattentive drivers who are chatting on hand held mobile phones. Note that the plastic bollard has received a bash, presumably from a carelessly-driven vehicle.

In short, the physical lay-out of the street is engineered to accommodate selfish, lawless parking (which would be much better dealt with at bus stops by a large fine and penalty points for persistent offenders)and in so doing it makes cycling more dangerous. Incidentally, no prizes for spotting the anomalous street furniture. 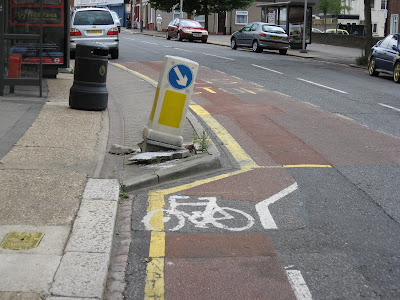 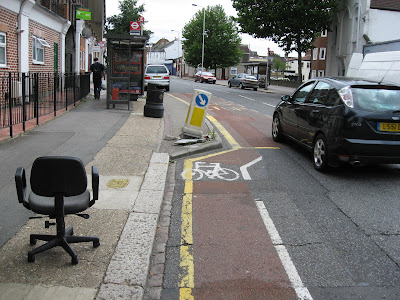 Posted by freewheeler at 22:03