The hypocrisy and impudence of the Council's advice that residents should "go car free" and "try cycling instead" is nowhere more blatant than in the little matter of cycle stand provision. All over the Borough there are council-owned properties used on a daily basis by members of the public which lack even a single cycle stand.

And how about the Selborne Walk Shopping Mall? This has 850 parking spaces. And cycle stands? By the main entrance in the Town Square it has just seven cycle stands, which as the photo below shows is grossly inadequate. Cyclists are reduced to locking their bikes to nearby railings. Read on - it gets a lot worse than this: 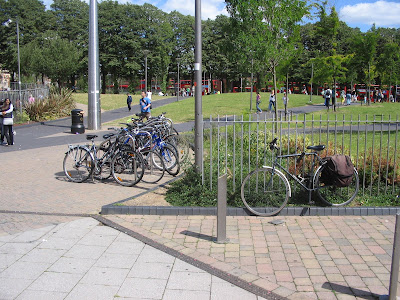 But wait! Didn't the Council install an extra 5 cycle stands near the High Street entrance to Bhs? Yes, it did. It employed contractors who didn't install them in the ground deeply enough. No sooner were they in place than one by one they started coming loose, like rotten teeth. Ah, but surely an efficient local authority would take note of this and get the contractors to come back and do the job properly? Yes, it would. But this Council is more interested in Greenwash than practical action. If you look at the photograph below look at the white patches on the ground - that is where four of the five racks used to be. I shan't be at all surprised when the last one goes. 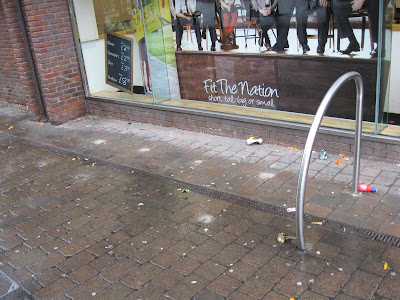 Posted by freewheeler at 16:13