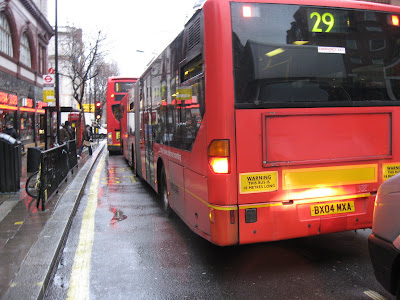 (Above) Conditions for cycling on Charing Cross Road in central London

(Below) Conditions for cycling outside Leyton tube station, High Road Leyton (close to the Olympic Village) 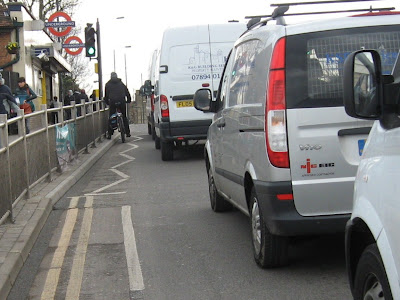 Once upon a time there was a cycling blogger who wrote

I cancelled my membership of the London Cycling Campaign. I should put a link to their page, but I’m not going to, because I think they suck.

My sentiments exactly. Although it wasn’t me who wrote that, it was legendary Buffalo Bill, who went on to remark (more wild applause)

Their big idea, the London Cycling Network, a network of X 000 miles of cycle lanes and paths, is a joke, and LCN+, supposedly the new improved version of LCN, is an even bigger joke

Bill had a follow-up rant here.

My own lusty application of a hatchet can be enjoyed here. Sadly many of those links are now irretrievably broken, because the LCC has revamped its website.

My heart sank when I read the précis of the speech given to last year’s Cyclenation conference in Edinburgh by Ashok Sinha, the LCC's new Chief Executive, who

Noted the greater diversity of cyclists now on the road and a change in attitude by the media.

(I hadn’t noticed either. And cyclists still seem to be among the folk devils of modern Britain.)

Outer boroughs have much potential for growth but lack of strategic direction now, with demise of Cycling England.

The idea that any of the Outer London boroughs have ever had the slightest degree of ‘strategic direction’ regarding the expansion of cycling is amusing. The existence of Cycling England never made the slightest difference whatever to the fortunes of cycling in such nirvanas as the London Borough of Waltham Forest.

Under the ConDem regime? Do I really need to comment?

All this sounded like the traditional LCC message: If you're happy and you know it, clap your hands.

But lo! Something is happening at the LCC. The tectonic plates are trembling. A wind of changing is blowing through the organisation. The conventionally inert LCC stunned a lot of us by organising a protest on Blackfriars Bridge! It even took it to the doors of the hated car-mongering traffic-flow-smoothers at Transport for London! And organisationally the LCC is rebranding itself as London Cyclists.

The organisation's explanation for these changes include:

as cycling has increased in popularity, and as other bodies are increasing their own outreach to cyclists, our membership (and activism) must grow in line. At the moment it isn't, and hasn't for some time. We need a change in approach.

we are revamping our approach to income generation to enable this increased campaigning work and make us less dependent on external funding. We narrowly avoided an extremely damaging drop in income this year and need to buttress and increase our funding base. (In passing, we envisage that a name change will be helpful in this area too.)

Finally we are overhauling our policy positions to give them greater coherency and clarity, and it will better articulate them to decision-makers and the public.

Whatever the reasons for them, I think the LCC's changes of direction are very welcome. Are they enough to make sullen and peevish ingrates like moi return to the fold?

What do you thnik of the new website? asks the new website. Well, I thnik it’s much, much better than the old one, although sum attenshun to the speling mite be good. Lovely photos though and very stylish… All the crap advertising seems to have gone, including such gems as the one urging LCC members to join the AA. The new website is currently a lot thinner in its content (the grand 5 year plan for cycling has vanished, as has the list of corporate sponsors - now people like me won't be able to poke fun any more at LCC sponsors whose websites mention car parking but not cycle parking).

As for policy. The old website was a mess and you had to engage in a major archaelogical dig to find out what the LCC actually stood for. The new website clearly and prominently articulates a set of objectives and positions. (London-wide the LC remains an institutionally incoherent organisation because its individual branches articulate widely different philosophies of cycling and campaign objectives - for example, in Hackney they loathe cycle lanes and oppose them, in adjacent Waltham Forest they support and praise them.)

It’s excellent that the LCC (or should I call it LC) has embraced Road Danger Reduction rather than the collaborationist, blood-drenched entity that is the ‘road safety’ industry.

Crikey! The LC has even starting talking about subjective safety – and we all know where that came from.

We support the implementation of cycle tracks when speeds and volumes of motor traffic are high, on streets such as Old Kent Road or the Embankment.

That seems a bit perfunctory to me. It doesn’t say ‘we will actively campaign for’. It’s also ambiguous: it seems to suggest that the LCC only embraces segregation where both speeds and volumes are high. Or to put it another way: does it embrace segregation on Charing Cross Road (say) where traffic volumes are high but speeds often low? Me, I want to see the LCC coming out with a list of London's top priority streets for segregation.

Installing segregated tracks on every street in London is impractical, and we'll continue to call for other measures such as removing through traffic and speed reductions on local streets.

But this is a caricature of what those of us who want Dutch cycling infrastructure are asking for. No one has ever suggested a segregated cycle path on every single street in Greater London. Eliding that with generalisations about street closures and speed reductions isn’t helpful because these last two goals don’t in themselves bring about mass cycling.

But here’s the crunch, and this is where my enthusiasm for the rebranded LCC starts to falter.

There's no magic wand that will instantly boost cycling from its current meagre figure of 2% of all journeys in Greater London to levels enjoyed by successful neighbours such as Denmark and The Netherlands.

What's needed is a whole range of measures to reduce road danger, improve infrastructure, and increase the attractiveness of cycling to the average person in the street.

Talking about magic wands sidesteps the simple reality that even in those two European examples one is significantly more successful than the other. The LC's 'magic wand' stuff strikes me as a fudge because it evades the core principle of the Dutch cycling renaissance, which is separation from traffic. And the infrastructure which first began to turn the Netherlands around was the creation of bike grids on major routes. Unless you are prepared to bite the bullet and start making that the central campaigning goal then everything else is a waste of effort, because there’s just no evidence that all these secondary campaign goals such as 20 mph zones are in themselves adequate to overcome the current mass resistance to cycling.

The London Borough of Waltham Forest already has all the stuff which many campaigners elsewhere still dream of - lots of 20 mph zones, extensive traffic calming, rigorous parking enforcement, 40 miles of cycle lanes and quiet routes, road closures etc etc, and NONE OF THIS HAS WORKED. Cycling's modal share in the borough currently stands at less than one per cent. That's because none of that cycling infrastructure has addressed on-street car parking, which is at saturation levels and getting worse, or the convenience and perceived cheapness of travel by car for very short journeys. All the most direct routes for cycling in Waltham Forest are on 'A' roads with large volumes of traffic, which deters all those apart from hardcore cyclists prepared to cycle on 1.5 metre cycle lanes alongside lorries, sometimes squeezed between long bays of parked cars and overtaking traffic. Cycling is very visibly unpleasant, marginalised and risky on all the major routes. You will never build a mass cycling culture in such conditions.

The idea that you can somehow generate mass cycling through lots of small initiatives is a very popular one, particularly among the committed vehicular cyclists who dominate cycle campaign groups. There’s a good term for that strategy: ‘pepper-potting’. Indeed, the whole history of ‘encouraging cycling’ in Britain over the past 20 years is about pepper-potting, whether by local authorities or cycling campaigners. But it hasn’t resulted in mass cycling, no matter how desperately the figures are spun, or how often individuals insist that they can see more cycling on their local streets. Objective cycle measurements always tell a very different story.

Check out 3.6.3 in this document (yes, I know the source is deeply ironic)

Both the need to feel safe whilst cycling, and the need for it to be convenient are provided where there are Dutch-style segregated facilities (and the extra options it opens up for reducing the speed, volume and permeability available to motorised traffic).

The LC's position on segregation needs to be rather more explicit than it is, and more coherently worked out, before I shall be renewing my lapsed membership. I'll be watching to see if it is. In the interim I think the new changes at the LCC are very welcome and long overdue.

(Below) Cycling infrastructure on direct convenient routes: High Road Leyton and Forest Road, Walthamstow. No cyclists were available for these photographs. 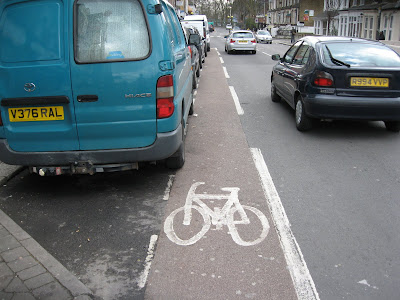 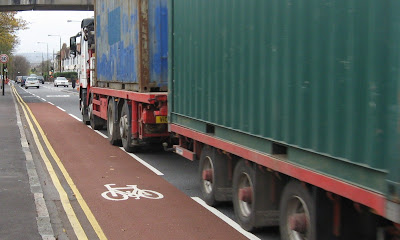 Posted by Freewheeler at 07:00