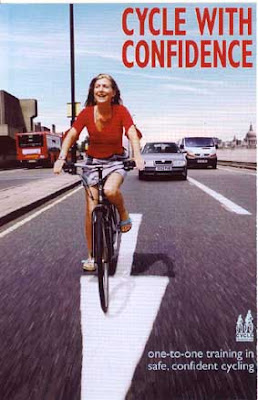 She won't be smiling for very long. Not cycling like that, not in London...

If we agree on the vision of mass cycling, and if we agree that getting there requires the replacement of the current car-based system by one based on bikes, then what might be the key features of this cycling system?

There are many. For example specific facilities such as high quality cycle parking; bicycle co-ops where old bikes can be re-cycled and cycling skills and knowledge learnt; bike shops; cycle training; events and activities aimed at inculcating the desire and capacity to ride. Although often massively under-resourced, many of these components of a bike system already exist or are being built. But going back to our research, the big one which jumps out – to the extent that it’s impossible to ignore – is an infrastructural one. The sheer weight of evidence that most people will not ride a bike on busy roads is unambiguous and uncompromising.

We need radically to restructure our urban mobility systems in ways which will get people out of their cars and make them cycle. Half of the infrastructural change required is underway – the push for a maximum speed limit of 20 mph on residential streets is gaining momentum. But the other half of the key infrastructural change required needs a similar push, and this push should be for very high quality and continuous segregated cycling infrastructure on our biggest and busiest urban roads, the kind of roads on which almost everyone today refuses to cycle.

Many cycling advocates have a good range of well-rehearsed complaints against segregated cycling infrastructure. It’s too expensive. There’s too little space. It’s too broad-brush a solution, and ignorant of the specificities of local context. But to find reasons not to make the required changes is merely to delay the outcome for which we are battling – mass urban cycling in England.

Perhaps the biggest barrier to the changes required is a lack of political will. But here we cycling advocates must get our own house in order first – unless we’re all saying the same thing, we’ve little hope of shifting the broader debates, and so transport policies.

Me, I see not a scrap of evidence that either the CTC or Cyclenation are willing to accept this message. Both organisations are at best equivocal when it comes to the issue of segregated cycling infrastructure. Neither sees it, as Dr Horton does, as a top priority. I just don’t believe that the people who run these organisations think that separate cycle tracks are the number one issue for cycle campaigners. The excuses why now is not the time to campaign for separate cycle tracks are limitless. But let's leave all that for another day.

it is exactly the measures Dave [Horton] is sceptical about that have contributed to London’s success as a cycling city. Transport for London’s behaviour change programme includes the congestion charge and a raft of adverts on billboards and TV promoting cycling using positive images of people riding in London, many without cycle helmets.

It depends how you define success. Modal share in Inner London is 3% and modal share in Outer London continues to stagnate at 1%. That to me does not amount to a successful cycling city. There is not a bat in hell’s chance that Boris Johnson’s target of 5% modal share for Greater London by 2026 will be reached (for the kinds of reasons I’ve pointed out here).

TfL itself admits that

Whilst many people cite fear as one of the main barriers to riding and conclude that they would only ride if they were segregated from cars, many are happy to move from these segregated/quiet routes once they’ve actually experienced what it is like to cycle on roads. Both TfL and London cycling campaigners prefer the ‘whatever works’ approach, calming traffic where appropriate to integrate riders into the traffic stream, segregating when that works, or building permeable networks of roads. All these hard measures are supported by marketing and cycle/driver training.

To sum up, the way forward is a holistic approach based on assessing what works to encourage cycling while minimising risk from the danger at source.

The pepper-potting approach of ameliorating conditions for vehicular cyclists has demonstrably been a catastrophic failure and has suppressed cycling for decades, not enabled it. Cycle training at best teaches you to adapt to cycling among motor vehicles; it can do nothing for your exposure to risk from forces outside your control. That's why so many cyclists wear yellow high viz tops and cycle helmets; it's a symptom of anxiety. Nor does it address the problem of the sheer volume of motor vehicles in London. Leaving aside all the familiar problems of close calls, left hooks, speeding etc, the very presence of motor vehicles is a deterrent to cycling. They slow you down, block your cycle lanes, fill up your ASLs, and spew exhaust emissions in your face. Even low speed motor vehicles are a deterrent to cycling because they create a deeply unpleasant environment for cycling in, beyond the issue of personal safety. There's nothing relaxing about cycling on car-clogged streets.

There is also the issue of retention. You can persuade some people to take up cycling but how many stick at it? What little research has been done in this area indicates a high recidivism rate.

As I've pointed out before

Cycle training first started in 1947. Around the time that cycling in Britain peaked and then began its historic decline. So if anything, cycle training is historically associated with contraction and decline, not growth.

I checked out David Dansky on Google.

CTUK's aim is to normalise cycling - show that anyone can do it, that no special gear needed.

Ironically, a spot of Googling also threw up a journalist's account of trying out some cycle training:

CTUK's ambition of normalising cycling and showing 'that anyone can do it' is, of course admirable. But 'anyone' isn't doing it. London cycling is overwhelmingly dominated by commuting white male professionals aged 25-44. (TfL estimates that 54% of cyclists on Cycle Superhighway 7 earn over £50K.) Children have largely vanished from London's roads. Most cyclists cycle alone. You won't see many families cycling. It's just not relaxing.

The one area where cycle training is useful and might be expected to show results is among children. However The number of cycling trips made by children and young people [in London] declined between 2001 and 2006/07.

Mr Dansky’s cycle training promo image (above) reminds me of the kind of smiley-smiley stuff TfL puts out. I’m afraid if you put yourself in the fast lane like this you won’t be laughing for long. As we know, Gareth of Croydon cycles according to the rules in the recommended assertive ‘taking the road’ manner, and you can check out his numerous YouTube helmet cam videos to see the consequences.

I might be mistaken but I think the cycle training poster above shows someone travelling southbound over Blackfriars Bridge.

So let’s go there. Because the problem is the infrastructure, not how cyclists negotiate the presence of motor vehicles. This is a very uncivilised cycling environment and most people are not prepared to participate in it, even if some young male professionals are.

Posted by Freewheeler at 08:54