The curious case of the fenced-off public footpath 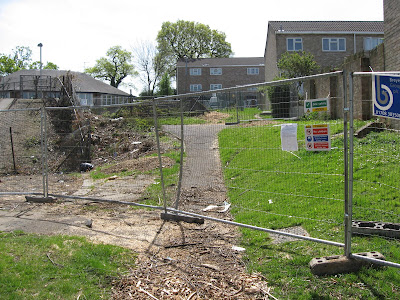 The north side of the fenced off public foopath on Wyemead Crescent E4. There appears to be no legal authority for the wilful obstruction of this path, which the Council is condoning in order to promote a property development.

Something very strange is going on at Wyemead Crescent in Chingford.

The Council has apparently handed over an area of green space, which includes a children's play area and a public footpath, for a housing development. In the "Notice of Public Path Order" published in WFM on 21 April, it says that planning permission for this development was "granted by the Council...on 27 June 2006".

The second mystery is why the site has already been fenced off and work has begun there. It is unlawful to block off a public footpath. Curiously, the Council has also published a temporary Road Traffic Order "to close to pedestrians the footpath link in Wyemead Avenue". It's plain that this is a slip for Wyemead Crescent. (Does a slip of this sort invalidate the legality of the Order?) The Order "would come into operation on 5 May 2008". Really? That's next Monday. So why was the footpath fenced off several weeks ago? Why has work already begun at the site?

What is also curious is that the Road Traffic Order purports to be "to enable road works to be carried out in a safe and efficient manner" in the footpath link. Yet, in the same breath, in a separate Order, the Council is seeking to get rid of the footpath altogether! Both Orders were published on p. 13 of WFM (21 April). A cynic might conclude that the Road Traffic Order was just a convenient ploy to fence the site off, to prevent potential objectors from accessing it, and to get started on the development.

This eagerness to permanently shut down a public footpath is in marked contrast to the Council's cavalier attitude to its statutory responsibilities to public footpaths as set out in The Countryside and Rights of Way Act 2000 and the National Parks and Access to the Countryside Act 1949, and it remains in breach of its legal duty to provide a Definitive Map and Statement of rights of way.

There is one fly in the ointment, however. Anyone who lives at an address in the London Borough of Waltham Forest can register an objection to the permanent stopping up of this public footpath. Objections are then forwarded with the Order to the Secretary of State for the Environment. If there are unwithdrawn objections, then the Planning Inspectorate becomes involved. The Inspectorate considers the Council's arguments together with those of the objectors, and then reaches a legally binding decision.

Because this public footpath runs at a forty-five degree angle across the middle of the green space, the development would almost certainly become unviable if the Inspectorate upheld the objections. (The developers might come back later with a different scheme but because of the public footpath route this is a very hard site to develop without getting rid of the footpath. If the footpath is saved, then the kid's play area will probably be saved too - and it's a rather cool play area with hills and stuff.)

The Planning Inspectorate is an independent body, with a good track record of refusing Councils permission to close down public footpaths. However, each case is decided on its merits. I'm only guessing, but I think a Planning Inspector might take a dim view of a Council which publishes Traffic Orders with names of non-existent streets on, and which prematurely fences off a public footpath without lawful authority.

I would urge everyone interested in preserving local public open space and public footpaths to register an objection. Basically this footpath runs between the south and north sides of Wyemead Crescent E4, offering a convenient short cut to Whitehall Road E4. It runs across green open land and clearly possesses amenity value. Write in your own words (preferably quoting something from the Council's own website about the importance of walking), stating that you are registering an objection to The Waltham Forest (Public Path) (Stopping Up) (No. 1) Order 2008. Send your objection in writing, quoting reference PCL/TMO/AC/LB30/WC, to the Council's agents: The Project Centre, 14b St Cross Street, London EC1N 8XA.

You can obtain a free copy of the Order and Order Map from the Project Centre (Tel. 020 7421 8222, email: info@projectcentre.co.uk) or you can see a copy by asking at the Town Hall reception desk, at the Waltham Forest Direct office 772-776 High Road Leyton, or at the Council's office on Low Hall, Argall Avenue, E10.

UPDATE on the legal position

The Ramblers Association publishes a useful guide to the law and public footpaths, including a section on temporary traffic regulation orders:

With regard to public footpaths, the law requires that notice of a proposed temporary Traffic Regulation Order (TRO) must be placed in a local newspaper, sent to consultees and placed on site – although the last applies only if the order-making authority considers it desirable in the interests of giving adequate publicity to the order.

LBWF has published just such an order in WFM (21 April 2008, p. 13) but it states clearly that "The Order would come into operation on 5 May 2008". The Order also refers to “the footpath link in Wyemead Avenue E4”. There is no such street, and it is clear that the Council means Wyemead Crescent. My guess is that this invalidates the Order since legal documents require 100 per cent accuracy. In any case, fencing off the site before 5 May is unlawful, but this is what has happened.

Once a TRO has been made notices must be displayed as to its effect in a prominent position at each end of the road to which the TRO relates... The authority must see to it that this information remains in place and legible throughout the duration of the TRO.

Curiously, there is a single notice attached to the fence on the south side, which states that an Order for the temporary closure of the public footpath was made on 31 March 2008. However, this would only possess lawful authority if such a notice had been previously published in the local press or WFM. This does not seem to have been the case and therefore this Order is worthless. My guess is that the Order published in WFM, and dated 21 April, was a belated attempt to rectify this omission.

What is also extraordinary about the apparently bogus 31 March traffic Order is that it states it will come into effect the very next day, 1 April.

Conventionally, temporary traffic regulation orders give a couple of weeks notice. In this instance someone has acted with indecent haste to have this green open space fenced off overnight, without any warning to local residents. This is very curious.

If you want to read what the Ramblers Association has to say about public footpaths and traffic regulation orders, see here.

For some previously unposted photos of the site see below. 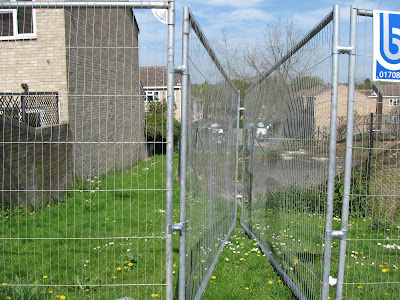 (Above) The site from the south side, looking north towards Whitehall Road.

(Below) Work has already started: the south side of the proposed development area. 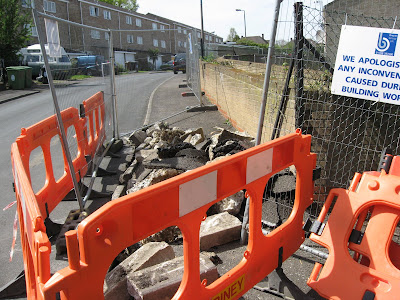 (Below) The site from the north, looking south east. Notice the devastation. 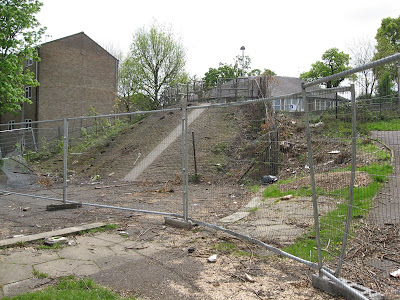 (Below) The public footpath running from the south side, towards Coney Burrows and Whitehall Road. 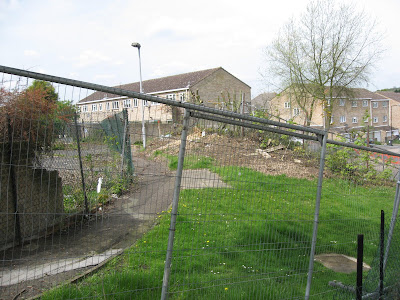 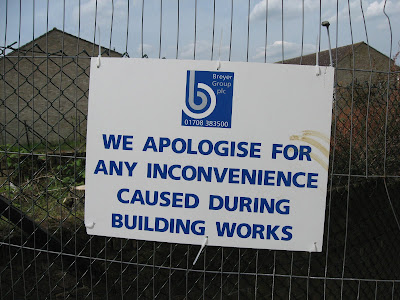 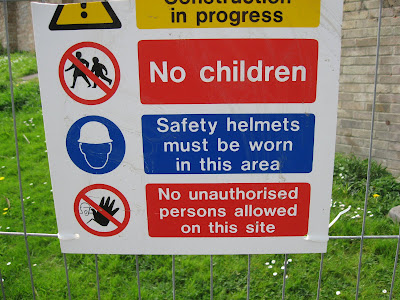 Posted by freewheeler at 08:09