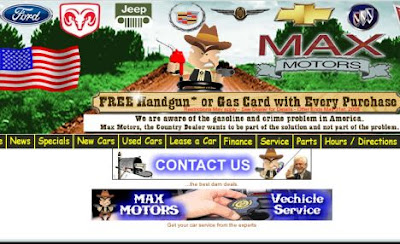 A car dealer is giving away a gun or £125 worth of free petrol with every motor he sells. Mark Muller, boss of Max Motors in Butler, Missouri, said most customers took the gun. He added: "We're glad that we live in a free country where you can have a gun."

If this had been terrorism it would have been headline news all week.. But driver violence is marginalised:

A man and two women died when their car was involved in a crash with another vehicle and burst into flames.

An early morning train from Holyhead to London on Virgin is now be three times more expensive than it was last week because passengers who were formerly able to buy saver tickets now have to purchase more expensive standard and open return tickets. Stephen Joseph, the executive director for Campaign for Better Transport, said the simpler ticket system would still not help those unable to book tickets in advance. "If you want to get a train from Manchester that arrives into London before 11am the price for that ticket has doubled in the past 10 years," he said. "What we're seeing is the disappearance of the walk-on railway and that is a real problem."

We can all joke about driving at 20mph being an elusive dream in vast areas of London, where the average speed is 12mph, but relatives and friends of the 231 people who where killed or the 3,715 who were seriously injured on London's roads last year don't care about statistics on the average speed. Everyone knows that a lot of drivers go way too fast in London, and something has to be done about it.

Organisations including the London Cycling Campaign believe the introduction of a 20mph zone across whole areas of London would do far more to encourage cycling than painting new cycle lanes. We have not only to reduce road danger; we must reclaim our streets by reducing the fear of road danger. Says Green London Assembly member Jenny Jones.

Prince Harry could face a police quiz over claims that royal minders raced after his car at 100mph as they drove to a nightclub.

The consequence of ‘losing control’

The Aldgate East gyratory was built in the Seventies but has been criticised ever since for creating a "racetrack" mentality among motorists, terrifying pedestrians and cyclists. Under an £8 million engineering scheme due to take the rest of the year, the northernmost section of the system, Whitechapel High Street, will be returned to two-way traffic.

Other roads near Braham Street, including Mansell Street, Leman Street and Alie Street, will remain one-way but will get new pedestrian crossings and "advanced stop" bays for cyclists. Pedestrian underpasses will be replaced with street-level crossings. Preliminary work by engineers has started and major work will begin within weeks, with the traffic "switch" - when cars can begin to travel in both directions along Whitechapel High Street - planned for August.

But there’s a catch

The project is being funded by developer Tishman Speyer, which proposes to build a commercial development at the eastern end of Braham Street once roadworks are completed. In return, the company will be given the parcel of land - which is currently highway - free.

Mike Armstrong has been cycling in Cumbria and isn’t too impressed by the Sustrans C2C route: It suddenly turns into a pavement alongside the busy A66. You are facing the oncoming traffic on the wrong side of the road.

Blue badge fraud is part of the £140 million of taxpayers' money that was stolen or lost from local councils in 2006-07, according to the Audit Commission. The figure, taken from the commission's National Fraud Initiative, is the highest recorded. It has led to calls for councils to take a tougher line.

By comparing recorded deaths with the list of blue badge holders, investigators found 16,102 people in 80 council areas were using blue badges belonging to the dead. The permits are intended for people with severe mobility problems who have difficulty using public transport. They entitle users to use free reserved parking spaces and avoid paying other fees such as the London congestion charge. The Audit Commission estimates each blue badge used fraudulently costs taxpayers as much as £5,000 a year.

Scientists have warned that carbon nanotubes could pose a cancer risk similar to that of asbestos. They say the government should restrict the use of the materials, which are included in a variety of consumer products, to protect human health.

In most products containing nanotubes, such as car body panels, tennis rackets, yacht masts and bike frames, the fibres are embedded in composite materials, which provide strength and lightness. In this form they are likely to be relatively harmless. But the researchers said further studies were necessary to confirm that — it was not good enough to simply assume that people could not be exposed to carbon nanotubes embedded in materials.

A new report lambasts the Government’s enthusiasm for expanding airports:

Hugh Raven, the SDC commissioner behind the report, said: "The Government thinks its evidence base is adequate. We don't think it is..This data is heavily contested. While we expected to find areas of conflict, we were unprepared for the level of fundamental disagreement over the data underpinning the Government's whole aviation strategy.

The Telegraph has launched a campaign to promote a fairer deal for drivers, including pressing Gordon Brown to scrap this autumn’s planned two pence rise in fuel duty. Shockingly, Drivers are shunning large, gas-guzzling cars, according to the latest sales data released.

A young man who suffered catastrophic injuries when he was hit by a car while walking along a road in Kent has been awarded £3.5m damages. Carl Wood, now 21, was struck on the northbound carriageway of the A21, near Pembury at 1am on April 4 2004. As well as skull fractures, causing severe brain damage, he broke his pelvis and right ankle, and now needs constant care.

Traffic lights across London will be rephased to ease congestion on busy routes, Boris Johnson announced today. The Mayor set out plans to change the sequences so they allow more cars through on every green light. As a result, there would also be slightly longer waits at red lights but pedestrians would still have time to cross.

Motorcyclists will be able to share London bus lanes under plans unveiled by Boris Johnson. The Mayor has instructed Transport for London to develop plans to allow motorcyclists on the lanes. Mr Johnson said a similar move proved successful in Bristol and wants it copied in the capital.

But cyclists claimed that allowing faster motorcycles into bus lanes would put them in danger. Tom Bogdanowicz of the London Cycling Campaign said that TfL's first report was "wrong". He told the Standard: "LCC advises against making any snap judgement on putting motorbikes in bus lanes based on what TfL has said. TfL says the data showed potential 'dis-benefits' to pedestrians and cyclists. Many cyclists find bus lanes a refuge from high-speed and unpredictable motor vehicles."

Campaigners have called for better protection for trees after claiming 9,000 were lost in London last year. A third of those trees were large, mature and in streets, according to the charity Trees for Cities.
Posted by freewheeler at 10:10