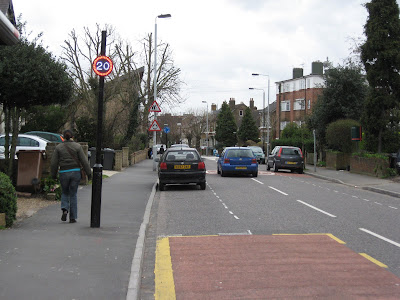 Fairlop Road E11. The 20 mph sign lights up, triggered by a driver flouting the speed limit.

As you may know

Research from the Department for Transport indicates that 1 in 40 pedestrians struck by a car at 20mph dies, compared with 1 in 5 at 30mph. At 40mph the survival rate falls to 10 per cent. A 1mph cut in average vehicle speed reduces crash frequency by about 5 per cent.

So it’s good news that, as today’s Times reports:

The speed limit on thousands of residential roads will be reduced to 20mph under government moves designed to cut road deaths by a third over the next decade. Variable limits will be introduced on main roads near schools, with digital signs ordering drivers to cut their speed to 20mph or less when pupils are arriving or departing.

But there’s a catch:

Cameras that detect a vehicle’s average speed will be used instead of road humps to enforce the limit in some of the new 20mph zones.

Only ‘some’ of the zones will be backed up by speed cameras. What proportion is ‘some’? 20 mph zones work with solid speed humps. They don’t work with speed cushions. And they don’t work at all on roads without physical speed restraints or speed cameras, because a very large percentage of motorists are simply not prepared to obey the law and are utterly indifferent to the safety of pedestrians and cyclists. Fairlop Road E11 is a 20 mph zone. The sign flashes thousands of times a day as drivers speed down the road, wilfully ignoring the speed restriction. It’s just the same on Hale End Road E17 and on other roads of this type in the Borough.

Perhaps this cynical indifference to speed limits is hardly surprising when a driver guilty of causing death by dangerous driving as a result of driving at 46 mph in a 30 mph zone, killing an elderly man who was crossing the road, was given a ten-month jail term suspended for two years after the judge heard his reasons for speeding. Griffin of Astley Bridge, Lancashire was also banned from driving for three years and also ordered to pay £750 costs.

The Times story also shows how statistics dealing with road crash injuries need to be treated with caution:

By 2006, serious injuries were down by 35 per cent but deaths had fallen by only 11 per cent. Hospital admission figures show that serious injuries from road crashes have hardly changed since 1996. This may indicate that the fall in numbers of traffic police since 1990 is resulting in fewer serious injuries being recorded. 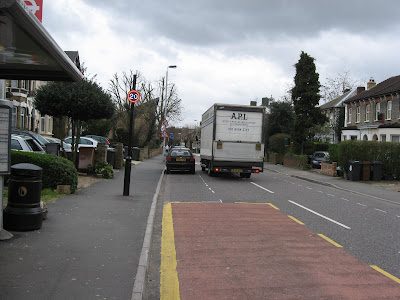 Posted by freewheeler at 08:40