How a traffic-free High Road Leytonstone was subverted 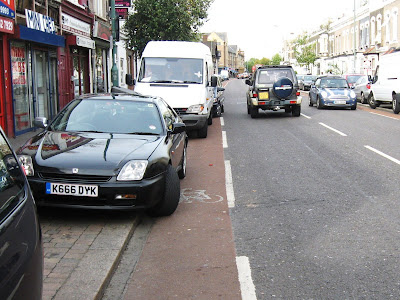 High Road Leytonstone, which Sustrans has described as "cycling friendly"


I've been trawling through the council's archives and came across various policy documents. See how over a thirty year period a proposal to create a traffic-free High Road Leytonstone was watered down and finally destroyed in favour of car dependency gone mad.

The District Plan 1980 stated that

On completion of the M11 Link Road, High Road Leytonstone should be closed except for buses.

A very progressive proposal, which quite possibly resulted from a lot of hard work by local transport campaigners in alliance with sympathetic councillors. Now see what happened.

On completion of the Link Road the Council will seek to exclude non-essential traffic from High Road and provide the opportunity to enhance Leytonstone Shopping Centre.

The proposal to exclude everything except buses has now been watered down but still excludes "non-essential" traffic, which implies (but does not explicitly identify) private cars.

The Local Implementation Plan (Transport), Consultation Draft May 2005 stated that

The borough is committed to improving the street environment for residents, both in major town centres and ribbon developments on main roads.

‘Residents’ are now implicitly synonymous with ‘car owning residents’ despite the high levels of non-car ownership in the London Borough of Waltham Forest and the knowledge that car dependency is extreme in Outer London with massive use of cars for very short local journeys.

Urban regeneration is now identified not with traffic reduction or restriction but with car parking:

The High Road Leytonstone Corridor Scheme (in association with Transport for London), to be implemented before the Olympics.

In the old days traffic schemes came with detailed drawings with specific measurements and figures. Nowadays in Waltham Forest it’s all glossy photographs and spin - generalisations with no concrete detail. For example, it is impossible to find out the width of the cycle lanes in this new scheme by scrutinising the available plans. Even the most detailed drawings currently on display in Leytonstone and Cathall Green libraries don’t provide that kind of information.

The scheme shows the extensive provision of free parking bays (a sample below). How many bays in all? This information is omitted from every single council document dealing with this scheme. 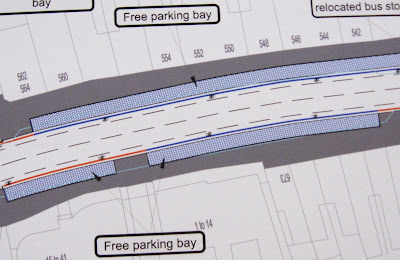 Cycle lanes are to be refurbished alongside parking bays, as if ‘dooring’ didn’t exist (and even if a ‘safe zone’ is to be supplied – and there is no evidence that one will be – it won’t, on past form, be wide enough and parking in it will not be an offence). 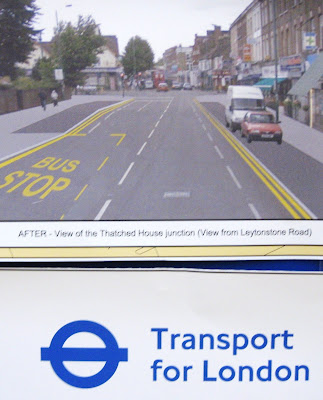 The zebra crossing is to be removed by Leytonstone station, to be replaced by ‘open space’ - sure to be a winner with the local minicab drivers who currently park in the cycle lane outside the station.

The scheme encompasses the area outside Harrow Green Library, which currently has no cycle parking whatsoever. However, the only parking deemed worthy of mention in this Corridor scheme is car parking. Cycling infrastructure is quite literally inconceivable to Waltham Forest’s transport planners, apart from the usual token on-road cycle lane.

There’s one other aspect of the scheme which overlooks the interests of anyone who wants to cycle to High Road Leytonstone. It blatantly indicates that these ‘improvements’ have been drawn up by planners who see the world through a car windscreen and who believe that economic prosperity and regeneration depend on providing as much on-street car parking as is possible. I won’t say what it is because it’s so obvious I’m confident that the local branch of the LCC with its detailed knowledge of local streets will spot it at once and demand changes to the plan.

It is worth asking what the driving force was (literally) in watering-down the traffic-free High Road Leytonstone proposal.

The answer quite simply is the borough’s transport planners and highway engineers, who are largely comprised of car-driving men who get financial help to buy cars and are financially rewarded for driving them. They also enjoy free workplace parking. Even though the London Borough of Waltham Forest is relatively small and can easily be cycled, the council is stuffed full of officers on “essential car user” allowances.

The drive to create an ever-more car-centric borough comes from the transport planners, not the public, and not even councillors. As I know from personal experience, even when campaigners can persuade councillors of the merits of schemes which curb car ownership and use, and even when those suggestions are enshrined in council policy, the transport planners simply obstruct them in every way possible. They are expert procrastinators. They simply wait until your favourite pro-cycling councillor has disappeared from the council – younger councillors tend to burn out quite quickly – and then dump the agreed policy.

Apart from walking and cycling being placed in the hands of car-centric transport planners for whom neither mode is at all personally relevant, the Blair local government reforms have further subverted public input into transport planning. Until fairly recently all traffic schemes had to be put before a transport committee and discussed openly before being voted on. This gave every resident and campaign group the opportunity to lobby councillors. Now all that has vanished, and traffic schemes are agreed behind closed doors between the officers and just one councillor, namely the cabinet member responsible for the environment. If this cabinet member is a weak councillor or an ill-informed one, then rubber-stamping becomes the order of the day. What then follows is a meaningless “consultation” process, like The High Road Leytonstone Corridor Scheme. Everything has been agreed in advance and your chances of getting any major structural changes are non-existent. At best you might squeeze a few cycle stands out of this scheme. Any tiny, parochial improvements on offer will only be those which do not impinge on the interests of drivers. And you will be regarded as mad if you suggest that High Road Leytonstone becomes a traffic-free street.

Five years ago the council did traffic counts on High Road Leytonstone which showed around 13-17,000 vehicles a day driving down it. These are relatively small numbers, yet they suppress cycling, clutter the street, pollute the air, and degrade the street for pedestrians. Motorists who drive to this street and park here for free are blatantly being exempted from the true social costs of their chosen transport mode. And their freedom to drive (hey, it's all about choice) crushes others freedoms, not least the freedom to cycle in a safe, direct, convenient and pleasant environment. There is nothing remotely attractive about cycling on High Road Leytonstone and that won't change after this scheme is implemented.

A street like this in Utrecht, with a population roughly comparable to that of Waltham Forest, would have almost no vehicles in it and 20-30,000 cyclists. This is a perfectly feasible scenario but one quite literally inconceivable to the kind of people who dominate transport planning across London. Unfortunately it is also inconceivable to lots of people who consider themselves to be cycle campaigners.

In short, The High Road Leytonstone Corridor Scheme is just another nail in the coffin of cycling, another contributor to obesity and air pollution, and another encouragement to the ownership and use of a car for short distances. Yet it could all have been so different, as someone understood 30 years ago. 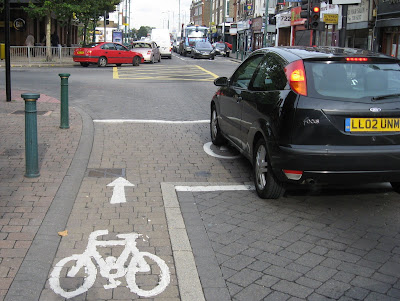 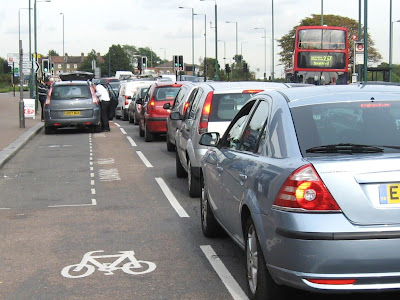 Posted by freewheeler at 11:15