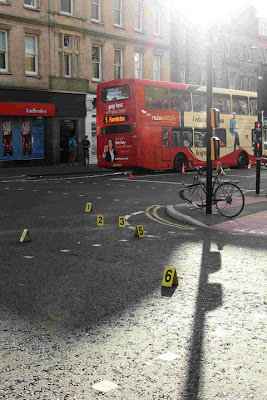 Photo: The Argus. The aftermath of a collision which apparently involved a left-turning vehicle and a cyclist.

Yesterday the car-centric Department for Transport announced that it was still determined to shun best practice at road junctions and was instead recommending the usual stale vehicular cycling solutions which will predictably result in cyclists being killed and maimed and which will do absolutely nothing to bring about a mass cycling culture in the UK:

The Department for Transport has published today a review of design solutions to protect cyclists at road junctions. It found that the four leading methods of protecting cyclists were creating advanced stop lines for cyclists at traffic lights; painting coloured cycle lanes across road junctions; straightening staggered road crossings; and changing traffic priority at crossings to give right of way to cyclists crossing roads on cycle lanes. The study concluded that it would be cost-effective to launch trials of coloured cycle lanes through junctions. It found that allowing cyclists to turn left at red lights was among the worst possible solutions.

The bit about ‘changing traffic priority at crossings to give right of way to cyclists’ sounds on the face of it quite progressive but it’s ambiguously worded  and I think all they are referring to is a theoretical right of way embodied in painted markings on the carriageway rather than an infrastructural one such as dedicated cyclists-only crossing phases or absolute priority for cycle paths at all side roads.

All the rest of these ‘design solutions’ are very obvious vehicular cycling crap with decades of failure embedded in their implementation. For example, some years ago the London Borough of Waltham Forest went through a coloured-cycle-lanes-through-junctions period, and these crap lanes did absolutely nothing for modal share because they provided no protection from turning or overtaking motor vehicles. (Though to be fair they were very useful for blind cyclists.)

The DfT ought to be setting an example but remains ideologically committed to prioritising motor vehicle infrastructure and the speed and convenience of drivers. I must say I find it rather weird to read the London Assembly's Transport Committee chair Caroline Pidgeon saying things like “The Department for Transport must allow TfL to catch up with best international practice”. The DfT is wilfully indifferent to best international practice, but then Ms. Pidgeon herself seems more than a little confused about what it amounts to. Trixi mirrors, training for lorry drivers, and poxy little lights for cyclists giving them a few seconds start at the lights are not best practice and form no part of Dutch cycling culture. And when I read people talking about segregated cycle tracks “where possible” my heart sinks, because there is no shortage of people who can come up with excuses why it can’t be done (roads too narrow, utilities wouldn’t like it, deliveries to shops, bus stops, would get in the way of car parking, just not possible).

A year on from the Kings Cross fatality we still have no understanding of why or how TfL makes decisions and takes actions when it is warned of danger to cyclists on roads it has designed, nor how it takes a measured responsible risk assessment when reopening a road following a severe cycle accident.

And now let’s see how “protecting cyclists [by] creating advanced stop lines for cyclists at traffic lights” works out in York, which as we know from the CTC is the safest place in Britain to cycle [see previous post, below]. Here (below) we see a woman cycling east in the cycle lane on Bootham, approaching the junction with Gillygate. A massive left-turning heavy goods vehicle is waiting just behind the Advanced Stop Line (ASL) for the lights to change. 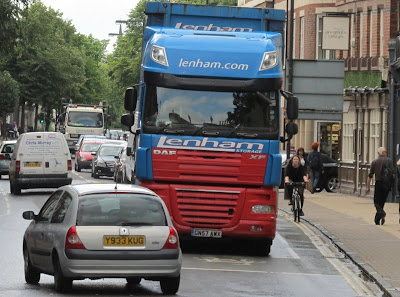 What happens next is that the woman undertakes this massive lorry and then positions herself ahead of the ASL. She has done something highly dangerous – undertake a lorry indicating a left turn – and she has acted unlawfully by moving beyond the ASL. 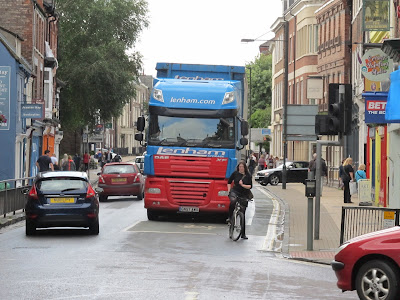 The point, of course, is that the infrastructure conditioned her behaviour. In Britain’s congested towns and cities it is quite common to encounter this kind of cycling infrastructure – a narrow cycle lane leading up to an ASL. Cyclists quite naturally undertake the line of stationary vehicles waiting for the lights to change, especially here on Bootham where, as a testament to York Council’s long history of discouraging walking and cycling, the vehicles can sometimes stretch all the way back to Clifton Green.

The danger point comes if the lights change while the cyclist is undertaking and hasn’t yet reached the ASL (always assuming that the ASL isn’t full of vehicles, as they so often are – a consequence of the prejudice against enforcement which informs all UK policing, which is institutionally car supremacist). This is where so many cyclists get caught out, alongside left turning vehicles at junctions. But having successfully negotiated the undertake it's only sensible to go beyond the ASL, because that may well put you slap bang in the driver's blind spot. Cyclists respond to perceived hazards in classically Darwinian fashion. Rule-breaking ensures survival, however much this may distress the 'winning respect for cyclists' brigade.

The solution, as the Dutch understand, is to separate cyclists from turning vehicles at junctions, either by separate signals or by cycle paths physically segregated from the carriageway.

Because the cyclist went beyond the ASL she ensured she was probably not in the driver’s blind spot, and when the lights changed she went on her way unharmed. It worked for a solitary cyclist, but imagine the situation if there were twenty or thirty cyclists queueing at this junction, some going straight ahead and coming into conflict with left-turning vehicles. Look at the space required by this driver to turn left into Gillygate, a two-way street: 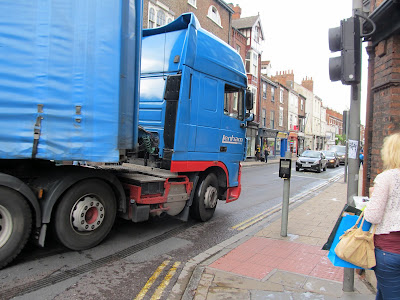 The DfT’s solutions for safer cycling at junctions are risible and inept.

Conditions for York cyclists are no better on the two other roads leading to this junction, which also have an ASL.

This is the narrow cycle lane on Gillygate, approaching the junction shown above. Not really cycling-friendly, is it? 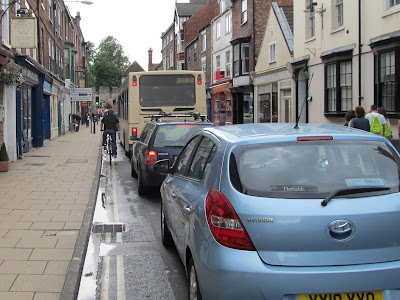 Here we see a woman on a bicycle on St Leonard’s Place, cycling north towards the same junction. She is forced to a stop by a stationary bendy-bus (caught up in the line of stationary vehicles backed up from the traffic lights at the distant junction)  which, wisely, she chooses not to undertake.

If you want to know why York is a failed cycling city, why cycling is stagnating there, and why the CTC’s claims for York are delusional and idiotic, look no further, dear reader, than the conditions shown in these photographs. 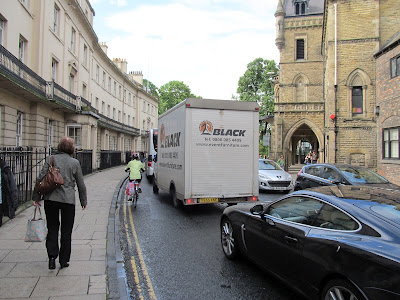 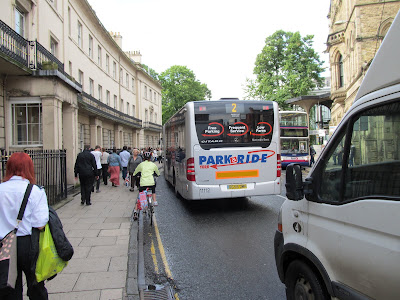