The All Party Parliamentary Cycling Group (APPCG) has revealed that it is launching a major inquiry called ‘Why Don’t More People Cycle?’

The answer to that question is very simple.

(i) For the majority of journeys cycling is dangerous, frightening and inconvenient, and perpetually subordinated to the convenience and speed of motor vehicles.

(ii) The UK cycle campaign establishment is managed by vehicular cyclists whose solution to (i) - in so far as they believe in it at all, which some don’t - is largely behaviourist rather than infrastructural.

(Below) The A112, the main north-south route through the London Borough of Waltham Forest. No inquiry is needed to find out why hardly anybody wants to cycle on roads with conditions like this. 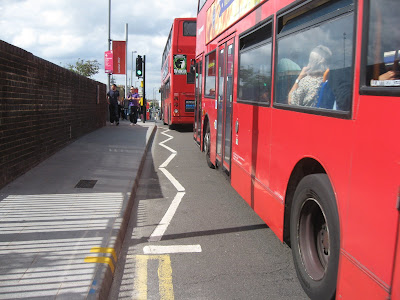 Posted by Freewheeler at 14:26