TfL’s ‘Network Assurance’: a massive obstacle to cycling and walking in London 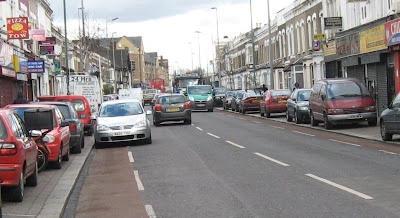 Smooth traffic flow. High Road Leytonstone (‘Cycling-friendly’ – SUSTRANS), yesterday. All the vehicles in this photograph are legally parked. No cyclists were available for this photograph.

London Travel Watch recently pointed out a fundamental contradiction between its own aspirations for better streets for pedestrians and Transport for London’s number one transport priority.

As London Travel Watch point out

The emphasis on keeping traffic moving as opposed to traffic reduction will limit the scope to rebalance the use of London’s streets in favour of the pedestrian.

Or for that matter cycling.

This is what ‘Network Assurance’ means: prioritising motor vehicle flow above all other considerations. Infrastructure for pedestrians and cyclists is rejected out of hand if it seriously conflicts with that priority.

I am writing to seek your approval to upgrade the junction of Notting Hill Gate and Linden Gardens to provide improved pedestrian facilities.
The scheme will then need TfL Network assurance approval before implementation to confirm that there is no adverse effect on traffic flow on Notting Hill Gate.

Traffic flow is the number one priority, irrespective of the constituents of that flow. Half of all car trips in Outer London are less than two miles in length. The situation is not so very different closer to the centre of the capital. Over 40% of people whose journeys finish in Lambeth are driving 2 miles or less.

TfL’s own transport modelling is responsible for this state of affairs, since its number one priority is not making those short car journeys more difficult but rather making them as easy and convenient as possible. The CTC’s Hierarchy of Provision states Consider first: traffic reduction yet TfL is institutionally committed to traffic accommodation, not traffic reduction.

‘Network Assurance’ traffic modelling is duplicated by all London councils, in the form of ‘smoothing traffic flow’ (a term you will probably encounter in every Local Implementation Plan in Greater London).

Historically, the massive growth in car ownership in London’s suburbs has been achieved by
(i) allowing more or less unlimited free parking on residential streets
(ii) where on-street car parking creates difficulties for other motor vehicle users, the footway is re-allocated from pedestrians for car parking
(iii) as residential streets reach saturation point they are converted to one-way, which in principle discriminates against any cyclists who live on those streets or who use them as cycling routes. The creation of additional one-way streets alongside others results in gyratory networks which obstruct direct cycling routes.
(iv) saturation parking results in the creation of Controlled Parking Zones, designed to exclude non-residential parking. However, in privileging residential parking no London council charges the true cost of parking a vehicle in the carriageway. In the London Borough of Waltham Forest the charge for unlimited parking of a car in a residential street is £30 a year, which represents a massive subsidy for what is effectively the rental of street space. There are no restraints on multiple vehicle ownership. As modern cars get bigger and as more people acquire 4X4s the pressure for street space grows, leading to the creation of even wider parking bays on footways, reducing the available space for pedestrians to as little as one metre, sometimes even less. This is well below all national guidelines for pedestrians, let alone pedestrians with a mobility handicap, but even the last refuge of the pedestrian – the footway – is reallocated for car ownership. This occurs even on streets where every household has off-road car parking; the acquisition of second, third or fourth vehicles is treated as a greater priority than the right of pedestrians to expect the footway as to be exclusively for walking.

So to recapitulate: transport modelling across London, by both Transport for London and London Councils, is designed to promote and prioritise both car ownership and car use.
Now let’s apply those twin realities to a document like Delivering the benefits of cycling in Outer London, a collaborative document put out in the name of the London Cycling Campaign, Sustrans, the Mayor, Transport for London and London Councils.

It correctly identifies many of the barriers to cycling in suburban London, not least that at an individual level (i.e. fear of cycling in traffic). Cycling is being massively suppressed and one third of Outer London households do not own a car. It accurately notes that

the potential for a substantial increase in cycling in Outer London is huge.

proposes a range of practical solutions for boroughs to implement.

And that’s where the document falls apart. Its ‘practical solutions’ in no way address the Network Assurance/smoother traffic flow model, or the relentless on-street accommodation of increased vehicle ownership. All it has to offer is vehicular cycling solutions – a range of small initiatives which

There is no hard evidence that projects like these, individually or collectively, will result in a substantial increase in cycling. Nor could they when (i) most people don’t want to cycle in traffic (ii) TfL and London Councils model their transport planning on making car journeys as quick and convenient as possible, and re-allocate street space to accommodate households buying their first car or adding to the number of motor vehicles they already own.

These are perfectly worthy objectives in themselves but they amount to an incoherent campaign strategy which will lead nowhere other than to a continuing tiny modal share for cycling in London. Such objectives signally fail to address (i) the failure of past vehicular cycling strategies of this kind to shift modal share in London (ii) the massive obstacle to cycling represented by the whole issue of safety (iii) the massive obstacle to cycling represented by transport modelling based on prioritising and accommodating car ownership and car use.

The thing that stops people from cycling is that they don’t want to ride on busy roads, full of motorised traffic that is going too fast and thinks it’s got the right of way and squeezes them. That’s the reason people don’t cycle. To me, the solution is obvious then – get rid of the problem. If you’re in the Council chamber, people will start saying ‘on your bike’ and ‘get in the real world’, but then you say, well, go to Groningen, Ghent, Copenhagen, Amsterdam, Munich – there are so many examples across the world of places which are now hollowing out their city centres, creating places for walking and cycling.
We’ve got a cycling promotion industry in the UK which refuses to contemplate the act of deterring driving. It’s always promoting cycling around the edges, not seeking to dismantle the central system of mobility in the UK, which is the car.

The London Borough of Waltham Forest is a very good place from which to perceive the failure of traditional cycle campaign objectives, because it already has the kind of vehicular cycling infrastructure which other campaigners still dream of: large neighbourhood 20 mph zones, extensive traffic calming, 40 miles of cycle lanes and quiet routes, Advanced Stop Lines at most signalled junctions, signed London Cycle Network routes, bike sheds at railway stations which are regarded as iconic by other campaign groups, road closures with cycle access.

What’s more the borough is astonishingly compact – think of it as roughly oblong-shaped, no wider than 3 miles from east to west, and about 6 miles from north to south.

Yet none of this has worked and cycling remains deeply unattractive to local residents, with a modal share of less than one per cent.

The reason for this is quite simply traffic. The borough is bursting at the seams with parked cars and people driving cars for ridiculously short journeys.

A tiny number of people are prepared to cycle among lorries, buses, vans and cars on car-choked streets but the overwhelming majority are not. Even if every single driver drove with consideration and treated cyclists with respect, Waltham Forest would still provide a discouraging environment for cyclists. This was my route in Leyton yesterday, for example. A cycle lane designated as part of the London Cycle Network. An action shot taken alongside moving traffic. 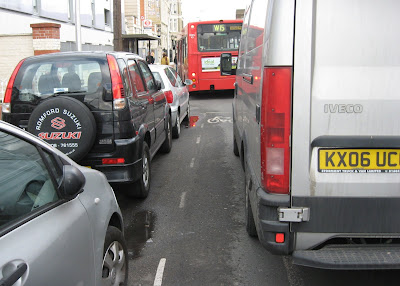 London Travel Watch explicitly recognises the contradiction between Network Assurance and its own aspirations for a better environment for walking. However, there are no obvious signs that Sustrans or the London Cycling Campaign recognise the same glaring contradiction between Network Assurance and a better environment for cycling (even though there are plainly individual activists within the LCC who understand all too well its implications).

To put it another way: the route to mass cycling in London and elsewhere lies through the re-allocation of street space from the motor vehicle to the cyclist, and the separation of cyclists from motor vehicles.

It’s not as if we don’t now have a model of proven success, or numerous examples of infrastructure that really works.
Posted by freewheeler at 12:33