The context and implications of a photograph

The CTC’s recent statement of support for quality segregation was, oddly, illustrated by a negative – the kind of crap off-road cycle path we all hate - but not a positive.

If you wanted to find out about the kind of infrastructure that sets the CTC juices flowing you had to follow the link to its Cycle-friendly design page, which uses this photograph as a sample of best practice. 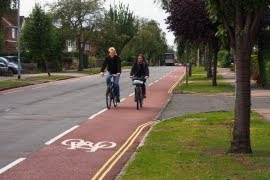 My own response to this Damascene conversion was to criticise this supposed best practice, while noting

Annoyingly there is no hint of its location, so it’s difficult to scrutinise the wider context.

But then we’ve been here before. The CTC’s Hierarchy of Provision page is illustrated with a photograph the location of which is not identified.

I stared at it for many months before I suddenly recognised it, probably because my perspective on York has never previously been from the top deck of a Sainsbury’s multi-storey car park. Once I understood the site I was able to establish the context, which as far as I’m concerned is deeply hostile to cycling and shows that the CTC continues to lose the plot. Since the CTC remains unrepentant about its use of this photograph or about its infatuation with the ludicrous and failed Hierarchy of Provision approach to cycling, then I’m afraid some of us will continue to see the CTC as an obstacle and not as an enabler of mass cycling in the UK.

Chris Juden asserts that CTC has never aimed low. If anyone is to blame for crap farcilities it's the diverse local cycle campaigns that sprang up in the 1970s and 80s. These groups initially measured their success in miles of facility, never mind how crap it was.

Personally I think that in idolising York and its crap cycle lanes the CTC is aiming very low indeed. The CTC’s vehicular cycling heart remains deeply wedded to crap cycle lanes, and the crap cycle lanes it promotes as best practice are just as much farcilities as the notorious joke off-road cycle paths which are dotted with street furniture and end with railings.

Likewise, the assertion that

painting white lines on the pavement requires little money and even less political will, it is generally worse than useless, and CTC will therefore continue to oppose it. Our position is pretty simple really.

invites some tweaking. How about this?

painting white lines on the carriageway requires little money and even less political will, it is generally worse than useless, and CTC will therefore continue to present it as desirable and as best practice and the best we can hope for in the circumstances.

The CTC’s bashfulness about every supplying a context for its best practice photographs was spotted recently by the Alternative Department for Transport in a blistering attack on the CTC’s ‘Right to Ride to School’ page:

and asks if this is not

a perfect example of cycle campaigners ignoring the elephant in the room? Why isn’t “because it looks and feels dangerous” on that list? How about “it’s insane to expect small children to cycle around cars and vans”? Even the photo they have used looks suspicious – why can’t we see where these children are riding their bikes?

I don’t think anyone from the CTC ever did reveal the location of their heavily cropped photo.

Which brings me back to the CTC’s latest ‘best practice’ pic. The enigmatic location can now be identified. And the first thing to say is that the choice of city is revealing. Just as the Hierarchy of Provision shows a street scene from York, this new one portrays a street in Cambridge. No coincidence. These are cities where cycling’s modal share is higher than normal for the UK, and the reason why the CTC is so keen on these cities is that they can be used to claim that a high modal share is possible with nothing more on offer than vehicular cycling.

The choice of location in fact takes us into the depths of the abyss which continues to exist within the world of UK cycle campaigning. It also raises key questions of vision and strategy. Because this crap cycle lane, dear reader, happens to be located on Gilbert Road in Cambridge. The local cycling group spent years campaigning for this infrastructure. It basically involved widening an existing cycle lane from 1.5 metres to 1.7 metres, colouring it red, and banning on-street car parking by putting down double-yellow lines. This provided a marginal improvement for existing cyclists but, arguably, is not nearly enough to draw in those who find cycling unsafe.

The alternative perspective is put by an unconvinced local blogger:

well done Cambridge Cycling Campaign. Really. You have achieved your goal. I just don’t think it’s the right goal. This is yet another marginal improvement for cyclists; yes, its wider, but it isn’t wide enough. Yes, you’ve got rid of parking there in theory, but you’ve left us with an advisory lane that is free for motorists to enter in to and to be a nuisance in. You’ve given us something that’s a bit better than we had, but which isn’t good enough.

This is the most cycled city in the UK, yet even on a busy road that serves multiple schools as well as being a major route for cycling in to the city, that has ample space for a fully segregated wide cycle lane without depriving motorists of a single lane, a route that would really encourage people to feel safe, that could demonstrate that cyclists aren’t just welcomed but really valued, even here what we’ve got is a cycle lane that barely does better than the naffest ones specified by the Department of Transport. Is that it? Is that all we get? All that campaigning from organised teams of motivated and determined cyclists? All that time and effort, and we get to this?

The problem really is very simple. The minimum standard we should require for cycle infrastructure is higher than is obtainable in the best cycling cities in the UK. What we want as a starting point is better than the most useful we can get from local authorities. This IS a victory, but not a tactical one. This sets a standard for the best new facilities we can expect to get into and out of the Cambridge, and while its better than we’ve had, its not good enough. Its not nearly good enough.

When cooperative campaigning fails, whats left? If we’ve got cycling campaign groups who view this kind of thing as a success, if they’re looking at what can be achieved without upsetting people too much, if they’re always willing to accept such compromises, perhaps we need to consider NOT being cooperative. Maybe we need to consider NOT avoiding upsetting people. Perhaps we need to make a nuisance of ourselves. When the best on offer isn’t up to the minimal standards we should accept, what purpose is compromise? After all these years of such campaigning we now have to accept the simple premis; conventional cycle campaigning bodies have failed. Well done Cambridge Cycling Campaign, I wish you all the best in your future endeavours. I just don’t get why you think you’re really getting somewhere.


Two things have happened since this modification of the old cycle lane. Firstly, cars continue both to be parked and driven in the cycle lane on an intermittent basis. 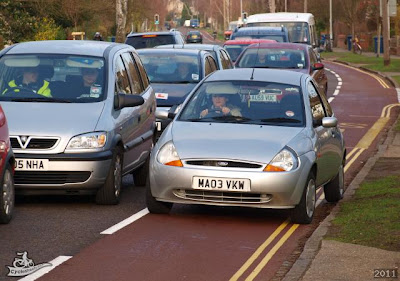 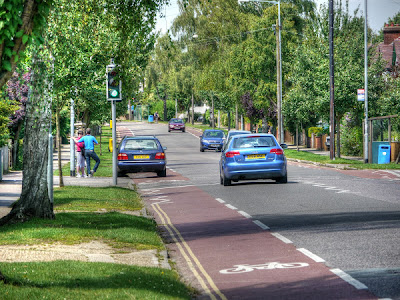 Secondly, some cyclists continue to cycle on the pavement on Gilbert Road rather than use the cycle lane, resulting in protests from local residents and demands for punishment.

The fact that people still choose to ride on the pavements there (and on the more frightening Arbury Road) is a damning statement about the failure of you, our County Councillors, to get cycle provision right. There is a real, huge demand for top quality cyclist provision across Cambridge


Cyclists’ did not get what they wanted. They got what Cambridge Cycling Campaign were willing to settle for because they saw such a situation as a pragmatic compromise. Thats right, they compromised on cyclist safety rather than show willing to change the politics of the situation by withdrawing support and opposing this and all such inadequate facilities. The evidence that it is not good enough? simply that many cyclists still choose to use the (bumpy, uneven, cramped) pavement.

This is an argument about both vision and strategy, because the Cambridge Cycling Campaign never asked for segregation, even though a segregated cycle track is both plainly possible and the only infrastructure that is adequate for a street like this. And this kind of thing is happening all over Britain. The ‘improvements’ to Gilbert Road are really no improvements at all, and for the CTC to present this cycle lane as best practice shows how flimsy its purported commitment to segregation really is, and how what our leading cycle campaign organisations regard as best practice is all too often a farcility which cannot be recognised as such because of vehicular cycling tunnel vision.

Worryingly, the London Cycling Campaign seems just as willing to go down the road of surrender prior to battle, judging by this astonishing statement in connection with the Lambeth Bridge roundabout:

A compromise solution would be to put in place a more simple continental-style roundabout, with narrow lanes and sharper corners to control speed, but without the segregated track. This could be done easily within UK guidelines and rules, and a continental roundabout would cost about the same as the current proposal.

By ‘a continental roundabout’ the LCC means the kind of useless crap farcility which you can see in York in the form of the so-called ‘magic roundabout’. In this instance the LCC’s commitment to segregation rings as hollow as the CTC’s.

Finally, the name Gilbert Road should ring a bell because David Hembrow was once involved in cycle campaigning on this street, and he has written at length about vision, strategy and practice in relation to this street:

The problem with this scheme is its lack of ambition. The campaign asked for little more than was built. No-one really ever asked for a "more imaginative solution" as discussed 11 years earlier.

What has been achieved in Gilbert Road is an incremental improvement, but not nearly the best possible outcome. If progress is to be made in cycling then campaigners need to start asking for the best, not watering down their proposals before even approaching the council.
Posted by Freewheeler at 09:22