Cycling Letter of the Week 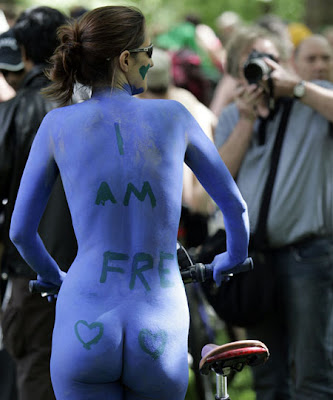 IT IS with great disappointment that my first public act as the newly appointed City of York Cycling Champion is to condemn those who intend to participate in the Naked Cycle Ride.

One of my key objectives for my champion year is to encourage the police to prosecute those cyclists who give us a bad name by cycling illegally on pavements, ride at night without lights and who ignore traffic lights.

What message on respect for the law and other people does riding naked through our city send out? Can they not understand double standards?

And this guy is supposed to be championing cycling? Jeez...

Yes, June is the month when cyclists all over the U.K. enjoy a popular new form of campaigning: the naked bike ride. The purpose of the rides is to protest car dependency, emphasize the vulnerability of cyclists and celebrate the human body.

The biggest rides are in Brighton and London. Most take place with the co-operation of the local police. One that doesn’t is in Edinburgh. The first attempted naked bike ride in Edinburgh was in 2004 and was halted by police, who threatened to arrest anyone who didn’t put their clothes back on. There have been no rides in Edinburgh since, but on Sunday 29 June there will be another attempt. It will be interesting to see if the Edinburgh police adopt the same aggressive attitude as before or this time let it happen.

In York there was a good reply to the anti-naked cycling hysteria here.

The York evening paper did a Reader Poll:

Should people have the right to cycle naked through the streets of York?

As the paper quipped, the ride gave a whole new meaning to York's Exhibition Square.

In the event 89 cyclists and a dog in a trailer did the ride. Bravo!

The national web page of the naked bike ride can be found here.
Posted by freewheeler at 11:58