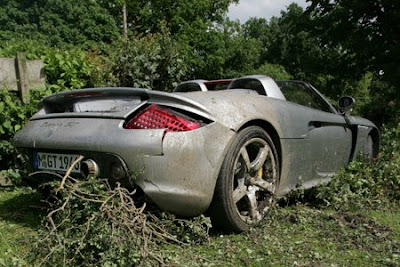 (Above) Lewis Hamilton's dad 'lost control' and careered into a children's play area. Luckily there were no children there at the time.

Cyclists will be permitted to ride the wrong way up one-way streets to encourage more people to give up their cars.

Kensington and Chelsea council is testing two-way access for cyclists on several residential roads with the scheme set to be extended across the borough if there is no increase in collisions. Daniel Moylan, deputy leader of Kensington and Chelsea council, said: "If this is what cyclists want to do and they are able do it safely, then we see it as our responsibility to adapt the legal position to allow them to do it legally.

"We are recognising the reality that cyclists prefer to take the shortest route through quieter streets. The alternative of having a policeman standing on the road to catch cyclists breaking the rules would be foolish and unworkable." He added: "Cyclists are offered very little in terms of safety and convenience. I hope that our trial will encourage other boroughs and as a result cyclists will be much freer to travel around.

Every day of the week drivers ‘lose control’. They can’t help it, it just happens.

The father of Formula 1 star Lewis Hamilton could have done with a bit of his son's road-holding expertise after he apparently spun off a road into a children's play area. Anthony Hamilton wrecked the £330,000 Porsche Carrera GT but no-one was hurt in the incident near the family home in Tewin, Hertfordshire.

A loss of control with more serious consequences:

A motorist has died after suffering multiple injuries during a road crash in north London. The woman, in her 30s, was driving on Rickmansworth Road, Northwood, when she collided with a parked Land Rover. She later died from her injuries.

Watch out for MEPs who get freebie cars as they attempt to scupper this proposal:

Car advertisements could be forced to carry warnings showing how polluting they are under new EU rules. The European Commission is believed to be considering a "traffic light" system, where red stars would mark out cars with high emissions, and green stars would be used for less polluting vehicles. Car manufacturers and advertisers are furious at the move, which they say will stifle creativity in adverts.

Elsewhere on the road violence front:

An 11-year-old girl has been hurt during a hit-and-run incident in Stoke-on-Trent. and Two boys, aged eight and 10, have been killed in a crash involving two vehicles on the M6 in Staffordshire.

The family of a young mother killed by a drink driver spoke today of their outrage after he was given a four-year prison sentence. Cheryl McGoldrick, 26, suffered fatal injuries when she was struck by Paul Clements, 28, who was driving at 53mph in a 30mph zone.

The insurance agent's blood-alcohol level was twice the legal drink-drive limit when he hit the mother of two in Beckenham High Street. Despite facing a maximum sentence of 14 years, Clements was jailed for just four after pleading guilty to causing death by dangerous driving.

A GROUP of heartbroken teenagers are struggling to come to terms with the deaths of three friends in 18 months on the same road. The youngsters lost pal Stuart Harper, 17, on Friday night when a car he was travelling in smashed into a tree beside the A95 Banff-Keith road. He died in hospital.The group were already grieving for Paul Nicoll, 19, whose car went off the road on to a railway line last June and was hit by a train.

Apprentice joiner Paul, of Newmill near Keith, bought a powerful 3 Series BMW three weeks before the crash. The A95 is a notoriously fast road and residents in Keith said there was a problem with youngsters speeding in the area.

Scotland gets tough with selfish parkers:

Proposals which aim to curb the abuse of disabled parking bays would benefit hundreds of thousands of people, an MSP said today. Labour's Jackie Baillie formally introduced a Member's Bill to the Scottish Parliament to tackle the issue.

AN ELDERLY man has been killed in a horror crash after being dragged under the wheels of a lorry. The crash happened on Great Junction Street. The vehicle belonged to a sub-contractor involved in carrying out utility works for TIE.

Cyclists talk about bikes and cycling:

On the bike I'll wear whatever will get me the least sweaty – usually the T-shirt that happens to be top of the pile. It's great exercise – I don't have to spend money on going to a gym. There's no way I'll ever go back to the Tube.
Posted by freewheeler at 14:58