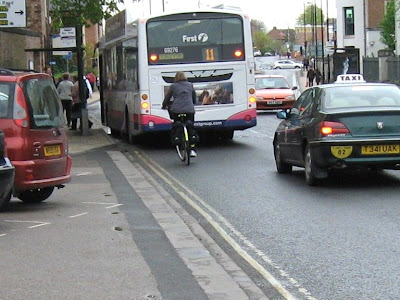 (Above) Cycling in car-sick York

York is a very compact city:

However, modal share figures for the period 2007-2009 indicate a growing rise in the number of York children who travel to school in a car. A report entitled A Sustainable Travel to Schools Strategy for York commented:

Detailed research is required to ascertain why children and young people do not walk or cycle in York.

Detailed research is not necessary. York is a car-centric city with a grossly inflated reputation as a cycling- and walking-friendly city. In fact its transport planning is little different to that of Transport for London or that found elsewhere in the UK. York’s transport planners prioritise ‘smooth traffic flow’. If you want to reduce motor traffic you have to inconvenience motor traffic and make it less convenient and attractive than walking, cycling and public transport. But York is like everywhere else, a grossly hypocritical highways authority which prioritises the private car while simultaneously ‘encouraging’ walking and cycling with empty words and smiley-smiley slogans.

Infrastructure for walking and cycling in York is subordinated to the convenience of drivers and motor vehicles. On busy streets pedestrians get sheep-pen crossings, which require two separate green phases just to cross the road. Cyclists get crap cycle lanes. Where infrastructure does exist that benefits pedestrians and cyclists, it is widely flouted. Drivers enter Advanced Stop Lines at red. They park across cycle lanes. They drive over crossings when the lights are green for pedestrians. They rat run through the pedestrian zone, unhindered by any enforcement. York’s crap council doesn’t even have dropped kerbs as a basic universal feature of the walking environment. Everywhere you go in York you encounter unlawful pavement parking and hundreds of shattered flagstones. York’s car-centric police are not interested in enforcing basic road traffic laws and neither is the council; York council could obtain the power to enforce footway parking but hasn’t done so.

There is no mystery why most people don’t cycle in York. It’s the infrastructure, stupid. If you make driving convenient and smooth, with lots of handy car parking, many people will choose to drive into and around city centres. If you make cycling subjectively unsafe, don’t enforce even minimal traffic restrictions and don’t supply enough parking, or supply parking with a high rate of theft, most people won’t cycle.

In the last ten years of the twentieth century York lost one third of its cyclists. No one who writes about York and cycling ever seems to mention that fact, but then most writing about cycling is at the default buoyant optimism setting. In place of a demand for infrastructure that works are substituted appeals for more promotion and marketing and cycle training and trying to make drivers behave responsibly. If you market a product that is crap people might be persuaded to buy it once, but after that they won’t.

York City Council has still not restored the level of cycling that existed in 1990, nor is it likely to as things stand. People cycle in York despite the infrastructure, not because of it. York ought to have an absolutely massive modal share for cycling, bearing in mind that it is a very compact city and also has a large student population. In reality York has dismally failed to build on its traditionally high modal share. Incredibly, the council (rather like TfL and the London Borough of Waltham Forest) is pursuing even more car-friendly policies. The pedestrian zone is being nibbled away at the edges for more car access. Here’s a traffic order I spotted on a lamp post last year: 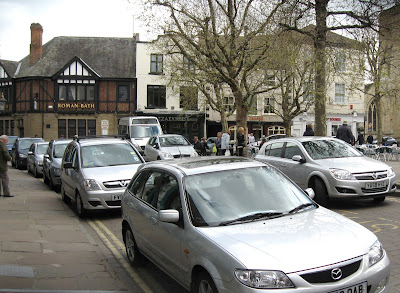 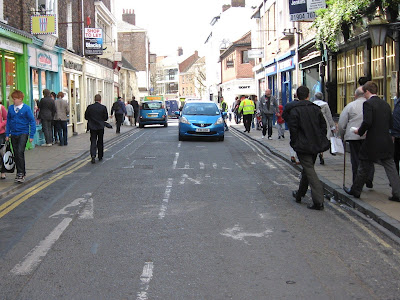 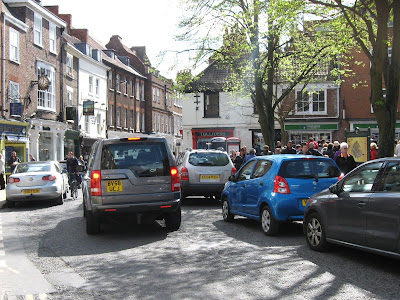 And now let’s revisit York’s famous ‘magic roundabout’. Would you want to send your child to school on cycling infrastructure like this? The three photographs below show the A1036 leading north-east out of York towards the roundabout. Cyclists who want to go straight ahead at the roundabout (up Stockton Lane) or right (along Heworth Road) have to get into the cycle lane between two lanes of motor vehicles, as shown in the third photo. Remember that this is nominally a 30 mph road, though many drivers are plainly exceeding the limit. 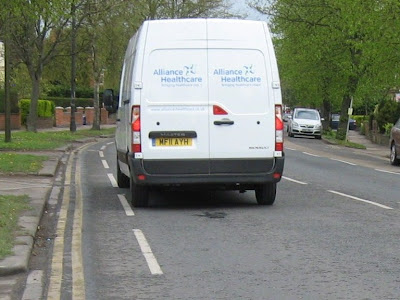 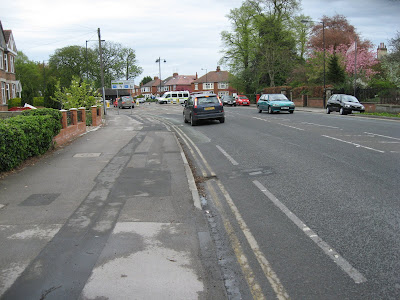 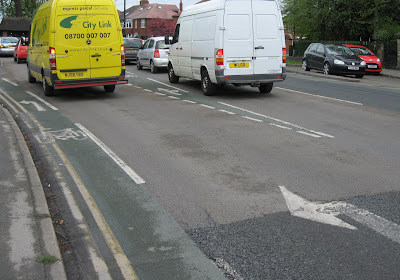 (Below) The 'magic roundabout', heading south back into York. Note the closeness of the car to the narrow cycle lane. Then look at the wider context in the next photograph. 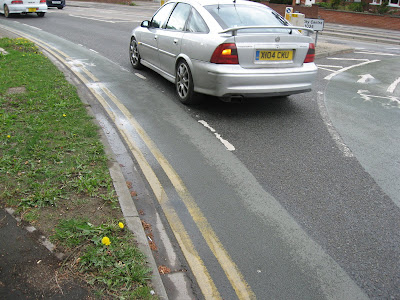 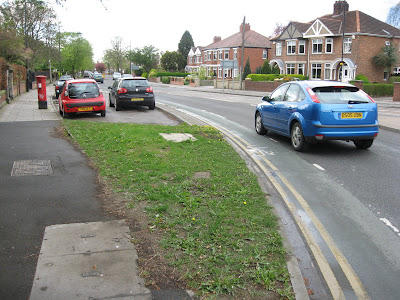 The design of the so-called 'magic roundabout' is astonishingly mediocre and comprehensively car-centric. The potential for complete separation of cyclists and motor vehicles on approach roads to the roundabout and on the roundabout itself is glaringly obvious. Get rid of that parking for two side-by-side cars and put in a segregated cycle track. That's the solution to York's cycling stagnation, here and elsewhere in the city.

(Below) Continuing south from the roundabout we come to this. Who would want their child to cycle to school on a cycle lane like this? York, like the London Borough of Waltham Forest, thinks putting a narrow cycle lane alongside parking bays is a brilliant idea. 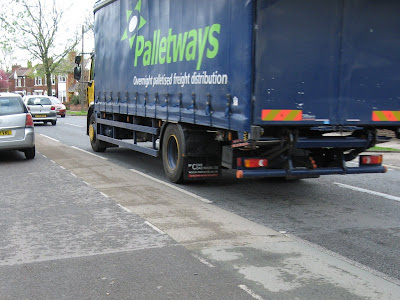 (Below) The cycle lane stops before a junction. And a cyclist is overtaken by a driver signalling a left-turn. 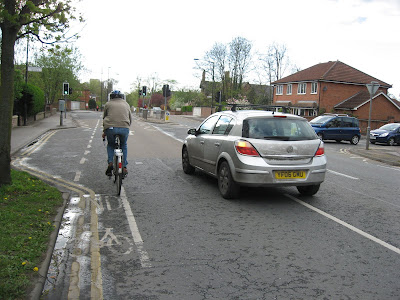 (Below) Beyond the junction the cycle lane begins again, then soon comes to a sudden halt. Parking bays take priority. Yet York Council has the gargantuan nerve and hypocrisy to claim that private car users are at the bottom of its road hierarchy, with cyclists taking precedence. 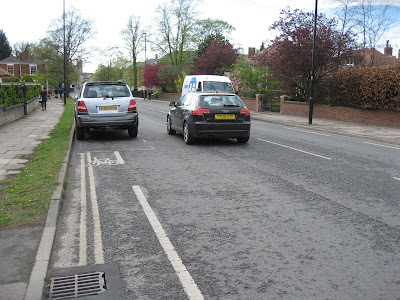 If you keep going you soon come to Foss Bank and more iconic cycling infrastructure.

For more about York’s magic roundabout see this 2003 CTC article here (pages 6 and 7), which I wasn’t aware of when I wrote my original critique. Also check out As Easy As Riding a Bike’s very interesting follow-up piece.
Posted by Freewheeler at 21:55