Recently I went from Walthamstow to Woodford (which is in the adjacent London Borough of Redbridge) two days running. The first time I went on my own, by bike. The next day I drove there, this time with someone else, to see the new Harry Potter movie.

My destinations were almost identical both days running. In each case it took the same time to get there – fifteen minutes. Cycling offered a more direct route, but that direct route could have been much quicker if the right infrastructure was there. What infrastructure there was for cyclists was subjectively dangerous, objectively dangerous, and substandard. An example.

This is Woodford New Road (A104) at Waterworks Corner (named after an underground reservoir). Here the carriageway is five lanes wide. The cycling route to Woodford is on the other side of the road. 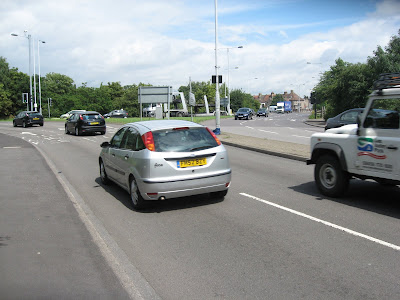 The distance from here to Grove Hill E18, a cul de sac which offers cyclists a direct route into the shopping centre, is, as the crow flies, about 100 metres. But cyclists and pedestrians are diverted under the roundabout. You have to go through a minimum of two underpasses, no matter what your destination. The signing is poor. This is what it’s like to cycle from the west side of Woodford New Road through the Waterworks roundabout underpass to Grove Hill. It takes two minutes – a long time to travel a distance of about 100 metres. Bear in mind that this is a ‘shared use’ route for two-way cycling and walking. Not surprisingly, no other cyclists or pedestrians are encountered on this lonely, out-of-the-way route. The subways are covered in graffiti, not all the lighting panels are working, the lighting column on the route is burning brightly in the daytime (which probably means the timer is wrong and it will be out during the hours of darkness). Because this is not a high definition film you can’t really appreciate the cracked surfaces or the litter or the slimy mud in the second subway.


Cycling infrastructure like this is always very poorly maintained. Indeed, just before entering the labyrinth inside the roundabout, the ‘shared use’ footway on Woodford New Road has this dangerous surface – a drain covering which has been shattered, probably by a lorry driving over the footway. Broken infrastructure like this often remains in this condition for months. 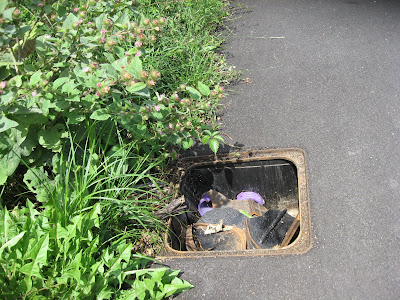 Which brings me to Harry Potter and TfL. The movie was preceded by half an hour of commercials and trailers. One of the first commercials was from TfL. It showed a variety of smiley-smiley cyclists radiantly happy as they pedalled through the cycling-friendly streets of London. 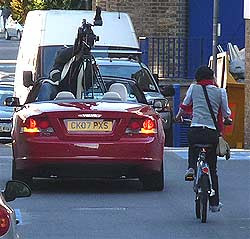 But as we know from Rob Ainsley (who took the pic above), the police close streets to motor vehicles to allow TfL to make their cycling commercials. These kind of adverts cost around a quarter of a million pounds and involve paying minor celebrities like Edith Bowman (no, me neither) five grand for a day posing on a bike. The message being: hey, it’s cool to ride a bike!

No it isn’t. It’s often stressful, inconvenient and dangerous riding a bicycle in London. It depends on your journey, of course - but a lot of the time it makes much more sense driving a car. Driving to Woodford was fast, convenient, safe and stress-free. Because I know the area very well I was able to find free parking close to the cinema. The only minor annoyance was encountering temporary traffic lights on Woodford High Road because of roadworks. No problem – on the way back I simply rat-runned through the residential streets, avoiding the lights. Everything in London is geared to making short-cuts by car as easy as possible, and it’s just the same everywhere else.

By the way, the TfL cycling commercial was only in two dimensions. The best ads were in 3-D. They included a cool Audi commercial (Audis are FAST and VERY SAFE was the message), a boy’s racing car game, and a trailer for CARS 2. By which time everyone in the audience had, I’m sure, forgotten all about that cycling-is-fun stuff.

Posted by Freewheeler at 10:37