A tale of three cyclists 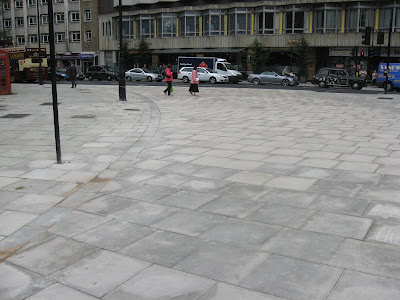 Russell Square. Obviously there wouldn’t be room on a narrow footway like this for a separate cycle track…


I must admit when I took a look recently at the ‘improvements’ to the south side of Russell Square I was very surprised. The old right-turn lanes into the Square have been blocked off and transformed into footway. You can see the line of the old kerb in the photograph above. This is very good news for pedestrians. It is bad news for cyclists, however, because now you have to wait a little further down the road, and make a sharp right turn.

What is absurd about the new design is that it could so easily have accommodated a cycle track. To be viable, however, it would also require lights with a dedicated ‘cyclists only’ green phase. As things stand, Russell Square remains a fundamentally car-centric location, and the so-called ‘improvements’ have actually made cycling worse – less safe, less convenient, more off-putting to all but hardcore cyclists. It didn’t have to be like this. And apart from the grotesque absence of cycling infrastructure on the Dutch model, the Square should have been humanised by blocking it off to through traffic. It would be perfectly easy to close the Square to through traffic by strategically-placed road closures which still permit access to essential traffic while deterring rat-running.

(Below) Let’s swing the camera round and look at the south side of Russell Square, facing west. The so-called ‘improvements’ involve a major narrowing of the carriageway, with parking bays for buses and coaches on one side and parking bays for cars and other vehicles on the other. Cyclists are squashed closer to motor vehicles. This is a truly incredible scene when the possibility of a wide, safe, segregated cycle track is blatantly obvious. It’s another testimony both to the lack of vision of London transport planning and its parochial ignorance of cycling infrastructure on the Dutch model which supplies a proven model of spectacular success. 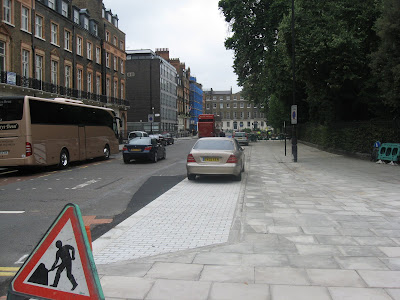 (Below) Look carefully and you will see two cyclists in these photographs. Both want to turn right into Russell Square (south side). One is an elderly male cyclist, who obeys the rules. The other is a much younger helmet-clad male. The younger cyclist swings out into the fast lane of north-bound traffic coming from Southampton Row, which is empty of traffic because it is held at a red light on the other side of the junction. He jumps the light and cruises into Russell Square. He is not at risk from drivers, because all lanes are held at red. However, this involves passing over the pedestrian crossing at green. In this instance there is no conflict since the cyclist passes behind the one pedestrian who is crossing. 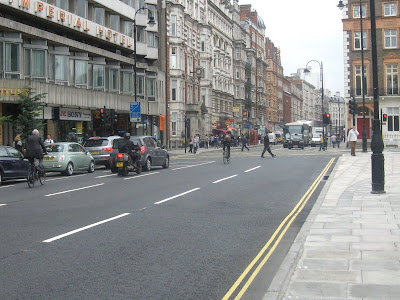 (Below) The elderly cyclist, now stationary, positions himself correctly to turn right. He gets some protection from having a right-turning motorcyclist behind him, otherwise he would be even more isolated and vulnerable, trapped between two lanes of large vehicles. The driver of the massive oncoming Dutch articulated lorry has to move over to his left to avoid the rear end of the lorry hitting the cyclist, then straightens up. The Dutch lorry is a left-hand drive vehicle, which means the driver is on the other side to the cyclist. 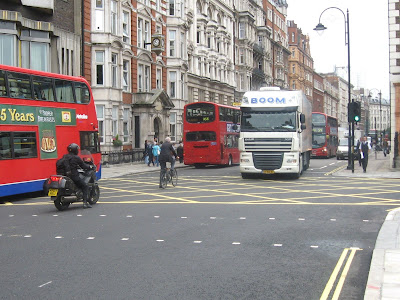 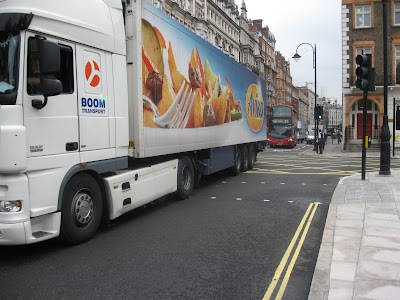 (Below) With a gap in the traffic, the elderly cyclist is at last able to turn into Russell Square. Take a look at what is happening in the background: a blue car and a cyclist travelling north on Southampton Row, towards the camera, both approach the junction. 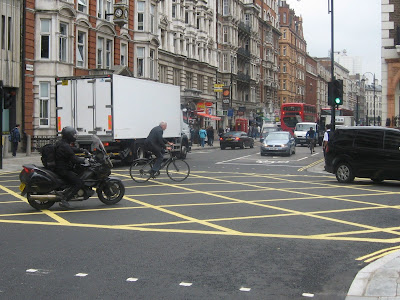 (Below) Note that in the background the blue car is now travelling parallel with the cyclist, both moving at the same speed. 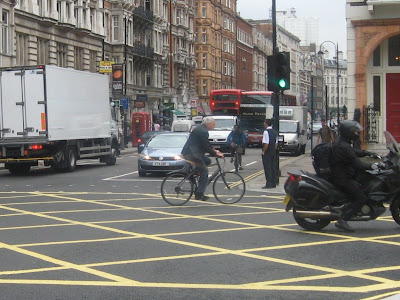 (Below) A near miss. The driver of the car turns left into the path of the cyclist who is going straight ahead. My photo catches the moment the cyclist swerves away and glances in surprise at the driver, who brakes. 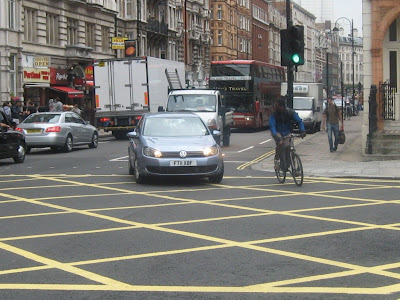 Left-turning drivers at this location (above) may be misled into thinking that a cyclist is also turning left because the road lay out here involves the road widening by the Square, with the north lane turning into two lanes. Cyclists move slightly to the left to go into the slow lane.

(Below) The cyclist (doubtless a little shaken by the experience) continues on his way, while the car turns into Russell Square. 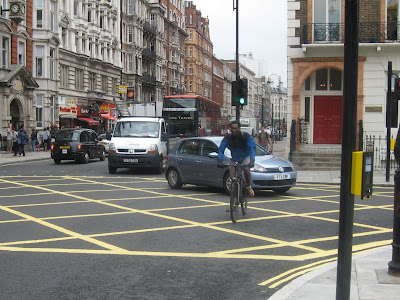 The moral of this sequence of events? For a cyclist, jumping a red light can sometimes be a lot safer (and quicker and more convenient). And it is pointless condemning such behaviour when the road network is built for the convenience of drivers, without safe and convenient infrastructure for cycling, and where rules designed to protect cyclists are not enforced. Darwin would have understood contemporary cycling behaviour in Greater London.
Posted by Freewheeler at 14:49