The curious case of the Olympic PR picture 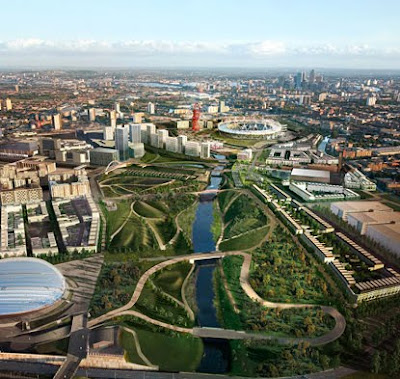 This is the latest PR pic of ye bucolic ‘Olympic Village’, released to the press by the authority’s Mad Men (I’ve borrowed it from today’s Evening Standard).

I’ve noticed that all these pretty pics always avoid giving you the full picture. The north-west corner of the Olympic site is always either missing because the picture has been cropped, or,  in its earlier incarnations, vanishes into a strange green mist. (In the  projection above the north-west corner is at the bottom right - or would be if it wasn't missing.)

What is curiously missing or obscured is (i) the massive multi-storey car park which occupies the north-west sector of the site (ii) the roads inside the perimeter of the site (iii) the A12 running alongside the site.

Why, it’s almost as if the organisers wanted to play down the massive role that cars will play in the Olympics!

As for us lucky local cyclists, here’s an exciting update.

The Marsh Lane/ Lea Bridge Road option brings you out by the Olympic car park. As far as I can tell the Greenway will involve crossing a Zill lane, which suggests to me that the Olympic Greenway will be closed by the A12 and cyclists will be told to divert to the towpath. Hilarious, if this is the case. Woops! - just remembered. The Met is is hinting strongly that the towpath may need to be closed for 'security reasons'. So your best option is to get a job with BMW, BP or Coca-Cola and go there by limo.
Posted by Freewheeler at 15:25