a new Olympic cycle track: this is as good as it gets

This is the brand new Olympic cycle track (or Greenway) which runs along the north side of Whipps Cross Road (A114), all the way from the Green Man Interchange to the roundabout at Whipps Cross. 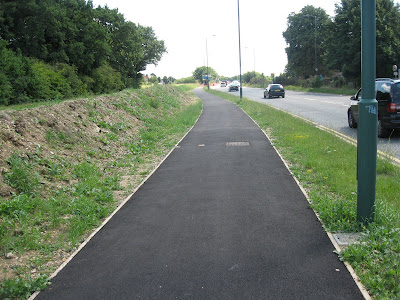 Plenty. It’s not quite finished yet and not officially open but its design deficiencies are glaringly obvious. This, for example. (Below) A sensitively located sign for motorists. 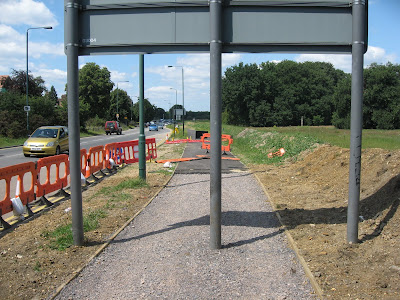 As far as I can tell it’s intended to be a two-way cycle track. Its core failing is that it is shared use. So it's not really a cycle track at all. Even though there was plenty of space to put in a separate physically segregated footway running parallel to the cycle track this has not been done. Along its entire length, two-way cyclists will be sharing with two-way pedestrians.

(Below) Conflict with pedestrians. A bus shelter, a bus stop and a distant zebra crossing - nicely spaced to give those lazy bus-users plenty of exercise. 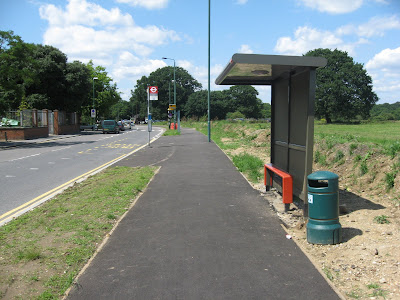 (Below) More conflict, with both pedestrians and drivers. People queue on the path for service at this wooden hut (which is very popular and sells refreshments 24 hours a day), just beyond which is the entrance to a car park, where cyclists and pedestrians are naturally expected to give way to vehicles. A properly designed cycle track would have required a complete re-design which involved moving the car park and the hut further back. And there is nothing at all to stop drivers parking on the Olympic Greenway. (To be fair to the council, they did want a better design than this by the hut but they experienced systematic opposition from the anti-cycling City of London, which owns the land.) 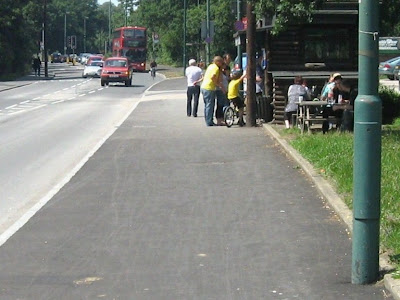 (Below) There’s a second car park, where cyclists and pedestrians are again naturally expected to defer to drivers. Cyclists will again be slowed down by the presence of pedestrians across the path. And even before the path is officially open a trader has placed advertising on it. Waltham Forest council has a long history of ignoring unlawful obstruction of the footway by traders. 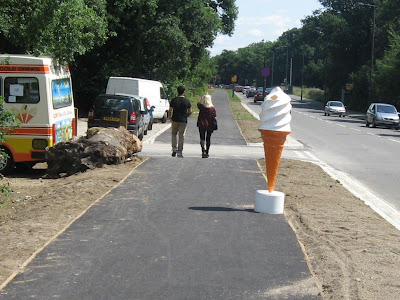 It would be interesting to know what design model was adopted for this infrastructure, which has failure built into it. I don’t remember this scheme ever being put up for consultation by the council, and I don’t know if the local branch of the LCC was ever consulted, and if it was what comments or criticisms were made.

One day this scheme will have to be re-done but obviously that will only happen when Waltham Forest Council addresses the reasons for the failure of mass cycling in the borough and begins seriously to engage with car dependency and car prioritisation. The current leader of the council, Cllr Chris Robbins, is obsessed with encouraging car use and car parking, so the prospects for mass cycling in Waltham Forest remain at present very, very bleak.

However, the main reason why this new Olympic ‘Greenway’ will fail to result in masses of people cycling to and from the Olympic site lies outside the basic design flaws of this unsatisfactory cycling infrastructure. It’s that to access the cycle route you first have to cycle in conditions like this (below). If you leave the Greenway at Whipps Cross roundabout, using the zebra crossing by the hospital entrance to get across the A114, this is what you have to cycle in if you are heading west down Lea Bridge Road or north along Wood Street. Two to three lanes of motor vehicles jostling for position, with vehicles sometimes travelling at high speed. 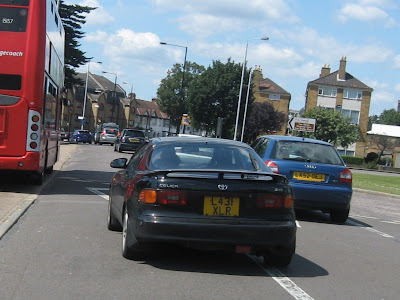