The Crooked Billet underpass is a labyrinth of cycle lanes and footways designed to keep cyclists and pedestrians away from the A406 North Circular. The price you pay for using an inferior transport mode to driving is to be forced down into the underworld.

Now as underpasses go these ones are fairly wide and well-lit, and there are usually other cyclists and pedestrians around when I use this site. However, although cycling is generally on the increase in the Borough recent figures showed a decline in cyclists using the Crooked Billet. This may or may not be to do with the fact that muggings and assaults occur here from time to time. Needless to say I've never once encountered bobbies on the beat in this fairly intimidating location.

That said, what really bugs me is the lethal design at the point where the cycle lanes emerge from the underworld and join the A roads. At the point where a cycle lane merges with an A road the planning convention is that cyclists are afforded some physical protection - usually a bollard mounted on a chicane or concrete base. Everywhere, that is, except crappy Waltham Forest. Here, the planners seem happy to paint white lines on the road and leave it at that. As below, where the cycle lane emerges from the underpass on to the A112 heading towards Chingford: 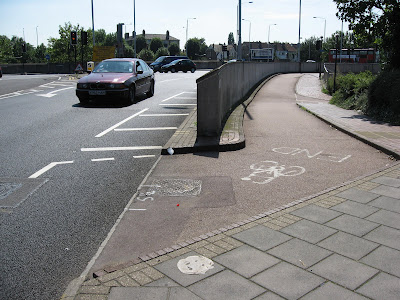 Notice the arrow on the road surface beside the car directing drivers towards... the cycle lane! Notice the complete lack of protection given to cyclists as they join an A road where drivers are belting round a blind corner at speed.

It is even worse at the other side (below), where cyclists emerge from Chingford in the direction of the Monoux sixth form college. Here, two lanes of fast moving traffic merge into one at the same point where the cycle lane enters from the right. Again, a blind corner, fast traffic, and no physical protection for cyclists at all. Incidentally, the contractors who did the resurfacing never bothered to reinstate the double-yellow line - another symptom of a crap Council not in control of its officers. 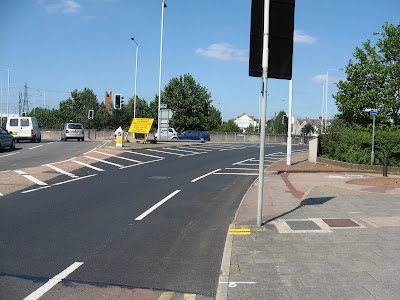 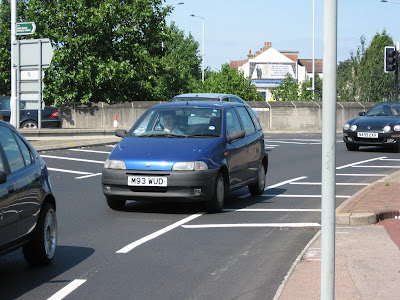 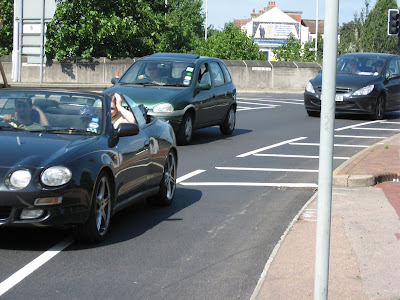 Posted by freewheeler at 15:56