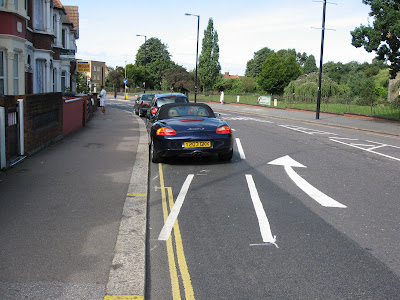 I wonder if they have crap like this in Sutton or Croydon? As it was a bank holiday today, the car in the above photo is parked perfectly legally.

This photo shows a change to the cycle lane in Forest Road E17, just after The Bell corner, heading towards inner London. Until very recently the cycle lane hugged the kerb. Now, parking bays have been introduced and cyclists are diverted out into the centre of the carriageway.

My guess is that the Council did this in response to the problem of illegal parking at this point. There's a fish and chip shop here which attracts a lot of trade from drivers who think nothing of parking on a yellow line and obstructing a cycle lane. One solution would have been to build out the footway and narrow the carriageway, making it physically impossible to park, while leaving a route through the footway extension for cyclists. Instead, the Council has chosen to accomodate the parkers and divert the cycle lane.

My objections to this diversion of the route are twofold. Firstly, the design is self-evident crap. No driver should ever be able to block the cycle lane in this way. It would have been easy enough to incorporate a physical impediment preventing obstruction of the kind shown in my photographs.

But an even greater problem at this location is speed. Huge numbers of drivers break the speed limit on this section of Forest Road. The only realistic way of curbing this is to put in speed cameras (as has been done on parts of Lea Bridge Road, which remains a deadly road for cyclists and pedestrians). It is quite unacceptable to expect cyclists to divert into the centre of the carriageway at a site where drivers are flagrantly breaking the speed limit. I shall not be unduly surprised if one day I open the local paper and read that a cyclist has been knocked down and killed by a reckless, speeding driver at this very location. 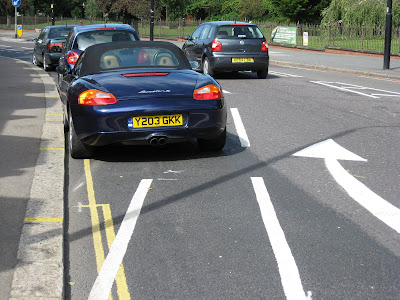 Posted by freewheeler at 17:25