The important thing to remember is that car parking always comes before cycle lanes. Cycling is an add-on, not a priority. Parking a ton of metal for as long as you want to is more important than encouraging cycling. This is why so many cycle lanes across Greater London end abruptly with a parked vehicle. And since there are no yellow lines, the vehicles in these photos are parked lawfully.

My photos show the cycle lanes on Leyton Green Road, London E10. These lanes are terrifying to use and I prefer to avoid them whenever possible. The traffic moves very fast and there isn't room for two cars to pass if cyclists are using both cycle lanes. 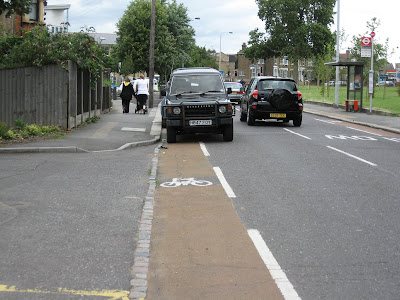 The situation is even worse going towards Leyton. Because of vehicles parked in the cycle lane, drivers are forced into the dashed white line zone in the middle of the carriageway (put there to deter drivers entering it). If you look closely you will see that the black car coming towards the silver car is in the cycle lane - the driver has no choice. The road just isn't wide enough.

High speed traffic and badly designed cycle lanes are a recipe for a cycling fatality. 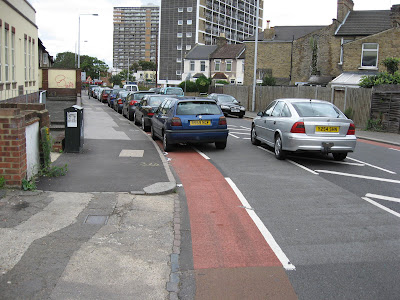 Posted by freewheeler at 11:55