I remember some weeks back there was an interesting little story in the weekly local paper, The Waltham Forest Guardian. A cyclist contacted the paper to complain about regular obstruction of cycle stands in the side streets off Walthamstow market. The culprits were local shopkeepers, who blocked them with goods put on the pavement (an offence) and market traders, who dumped rubbish around them (an offence). The newspaper verified that this was indeed happening.

When the paper contacted the Council, a spokesperson said that they were unaware of the problem (why not? – this is a prominent and busy location). However, now that it had been drawn to their attention they would act. Their officers would keep an eye out and deal with any problems that occurred in the future.

I’ve lost the cutting and I can’t remember all the streets which were listed. But one of them was Vernon Road E17. And this is what I found when I pedalled there yesterday to do a quick spot of shopping in my lunch hour. 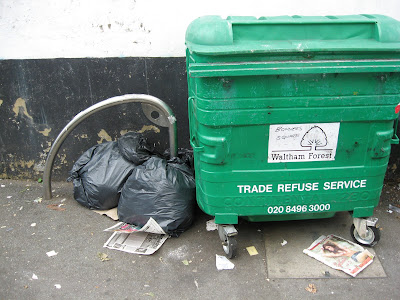 There used to be two cycle stands on this side of Vernon Road, close to the junction with the High Street, but now there is only one (the mysterious disappearing cycle stands of the London Borough of Waltham Forest is a separate story which I’ll come to another day). The label on the green commercial waste bin wedged up against the cycle stand identifies it as the one allocated to Bonners by the Town Square. This is curious as Bonners are a fruit & veg outfit at the other end of the market and it clearly has nothing to do with them. My guess is that it is used by the fishmongers on the corner of Vernon Road and the High Street, as it is alongside their premises. Who dumped the two black sacks next to it is anyone’s guess.

So then I crossed to the other side of the road, where there is another cycle stand. And this is what I found: 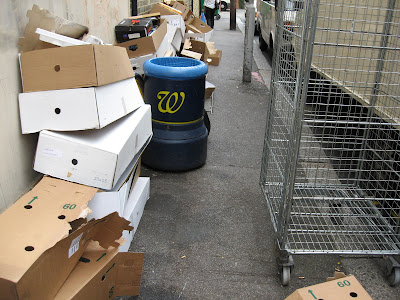 The cycle stand is hidden away to the left of the litter bin with the ‘W’ on the side (that’s ‘W’ as in ‘crapWalthamforestcouncil’). Totally inaccessible. Take a closer look: 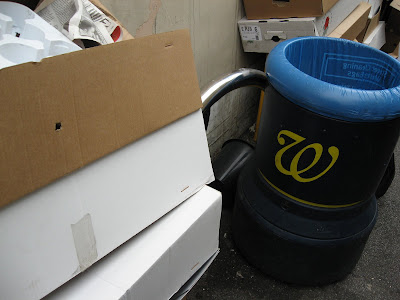 Two conclusions can be drawn from this, I think. Firstly, whoever is employed by the Council to monitor the condition of these cycle stands should be transferred to other duties and replaced by someone who is prepared to do the job properly. Secondly, the shops and market stallholders responsible for these obstructions should get one strong warning, after which they get prosecuted or their trader’s licence taken away.

Mind you, there’s also a third realistic conclusion to be drawn. The Council is crap, it will never deal with the problem, and it will still be wasting its time and money on spurious cycling propaganda and empty Green initiatives when the floodwaters surge down the High Street and a tornado rips the roof off the Town Hall, as a consequence of this crap Council’s unending commitment to car dependency and catastrophic climate change.
Posted by freewheeler at 12:16