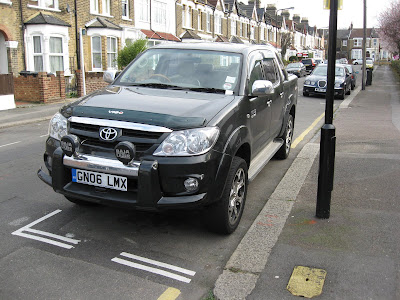 Forensics officer Mr Pugh, who speaks on DNA for the Association of Chief Police Officers (ACPO), said that signs of future criminality could be found in children as young as five. He told the Observer newspaper: "If we have a primary means of identifying people before they offend, then in the long term, the benefits of targeting young people are extremely large. You could argue the younger the better."

He added: "Criminologists say some people will grow out of crime, others won't. We have to find out who are possibly going to be the biggest threats to society."

The biggest threats to society? How about motorists. Every day in Britain they kill ten people and injure hundreds more. No other form of violence matches that. But that's not the kind of offender Pugh has in mind. And ACPO have traditionally resisted enforcing traffic law. ACPO has never regarded driver lawlessness and criminality as 'real' crime. Reckless anti-social behaviour by drivers is widely condoned and its consequences are sanitised as 'accidents'.

This sort of thing, for example, which attracts no comment at all:

Tyrese Hannah was walking in Drove Road in Swindon when the accident happened during the rush-hour on Friday. A Wiltshire Police spokesman said the child was taken to hospital, but later died. "The driver of a grey Peugeot lost control while negotiating a right-hand bend and collided with a lamppost," said the spokesman. "The pedestrian was taken to hospital where they unfortunately died of their injuries."

And barely a week after a spectacular head-on crash which killed 7 people, this double killing attracted no interest at all: Two people have been killed on the A338 in Wiltshire after their car was involved in a head-on collision.

The media is full of stories about teenager who carry offensive weapons – but says nothing about drivers who attach killer bull bars to their vehicles. The newspapers rage about shops which sell alcohol to minors, but have nothing to say about car showrooms which sell vehicles designed to flout the maximum national speed limit by a massive amount.

The lawless behaviour of motorists on Forest Road, where every day thousands of drivers break the 30 mph speed limit, is a matter which simply isn’t discussed. And the police, who have traditionally resisted speed cameras, suddenly develop a rabid enthusiasm for crackpot technology designed to deal with teenagers:

A TOILET plagued by anti-social behaviour could be fitted with a controversial 'mosquito' device to drive troublesome teens away. Police want to install the gadget, marketed as a yob deterrent, outside the convenience in Woodbine Place, Wanstead, after residents complained that a recent make-over had failed to stop young people congregating around it.

A bench just outside the toilet has become a prime meeting place for local school children who are intimidating people." PC Hudson admitted the youths were not breaking the law by congregating at the bench, but asked the committee to consider funding the appliance, which would cost more than £500, to put residents' minds at rest.

Which brings me to the vehicle shown at the start of this post. I spotted it in Walthamstow the other day. A gas guzzling 4X4. The kind of vehicle which the Council is encouraging residents to buy by turning over more and more pavement space for car parking. If residents choose to buy bigger and bigger vehicles then pedestrians must pay the price.

What I particularly noticed was the name of this 4X4. Cyclists might not find it very amusing.

It's a Toyota Intimidator. 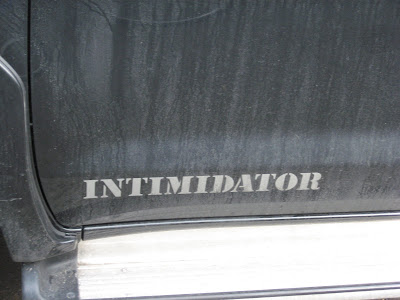