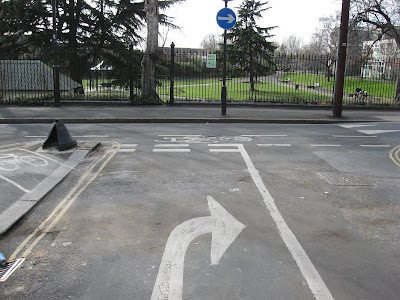 The Links E17, approaching the junction with Pretoria Avenue.

Answer: the 'RIGHT TURN ONLY' sign should include the qualification 'EXCEPT CYCLISTS'.

Cyclists are entitled to turn left to use the contraflow lane on this one-way section of Pretoria Avenue. You can spot the cycle lane cut-through on the chicane on the left. It's a pity that the dropped kerb hasn't been installed professionally, which means cyclists hit a two inch high kerb rather than a surface level with the carriageway.

Caution is required when turning left here. A wide vehicle approaching from the left might well be in the cycle lane and would hit you head-on.

It's also the case that some drivers don't seem to fully understand the design concept on this section of Pretoria Avenue. A one-way street with a contraflow lane for cyclists is something not all drivers are familiar with or perhaps understand. When I turned left from The Links here recently I met a white van coming towards me on Pretoria Avenue. There wasn't any problem, since the vehicle was in its lane and I was in mine and there was plenty of room. But rather to my surprise the driver slammed on his brakes and threw his hands in the air in a gesture of despair. I think he thought I was a crazy rogue cyclist going the wrong way down a one-way street. 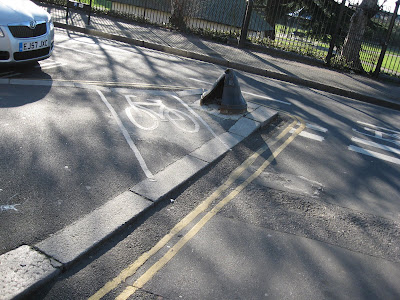 Posted by freewheeler at 08:02