The Council recently hosted ‘the Big Conversation on climate change’. Local people and environmental groups were invited to come along and offer their own ideas on combating the end of the world. And who can doubt that if anyone can single-handedly reverse global warming it’s cutting edge London Borough of Waltham Forest?

The Council's fab rag wfm is strangely reticent on how many people and organisations bothered to attend, and this exciting news story is illustrated by a photo of six people at a table and a globe. Bob Belam confides "We had an animated discussion about climate change...a number of excellent points were made by residents."

Animated? Does that mean there were people there who doubted the Council's commitment? Why, when it comes to Greenwash no one does it better than LBWF.

The Council published its Green Charter in 1989. Over the next 12 years did the percentage of local households owning three motor vehicles go up or down?

Correct! It went up to almost a quarter of all households. This magnificent rise was achieved at the expense of the 39 per cent of local households which don't own a car.

This substantial rise in multiple car ownership was partly achieved by exempting hundreds of local roads from the pavement parking ban, including many pavements with trees. This resulted in trees being hit by vehicles, requiring their removal. How many trees have been lost as a result of turning pavements into car parks? Is it (i) 67 (ii) 2,307 (iii) the Council hasn’t got a clue.

Correct! The Council hasn’t got a clue.

And all over the Borough you can see little squares of earth or tarmac, where a street tree used to be.

It starts like this. Vehicles mount the pavement with the full approval of the Council, and then some drivers hit the trees, scraping off the bark (below) or hit them so hard the trees die. And then the trees are removed, the pavement is resurfaced, and there's more room for car parking. Marvellous! 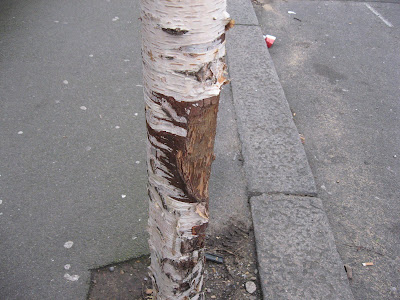 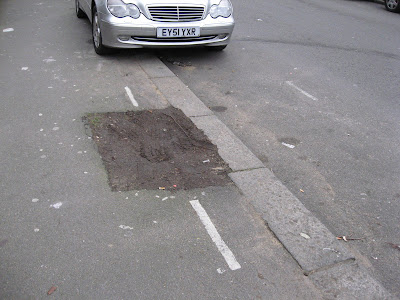 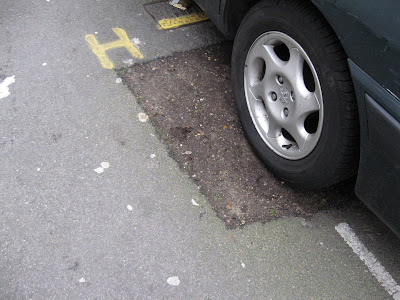 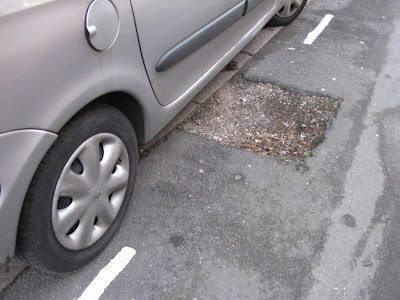 Posted by freewheeler at 08:08