Watch the Mirror’s shock-horror David Cameron video [see previous post] and you’ll see that the one way street has ample room for a contraflow cycle lane. As there is clearly a cycling need, why isn’t it being met? Car parking on both sides of the road is given priority, which tells you everything.

The solution is easy enough. Allow cyclists to use ALL one-way streets in the 'wrong' direction. Here's an interesting example: Crowland Road in South Tottenham. Cyclists don't get a contraflow lane, simply intermittent markings. 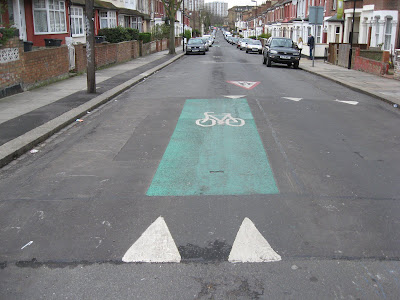 At the end of the road cyclists are physically separated from traffic entering the one-way system.

Unfortunately that's where it breaks down, because drivers have flouted the (faded) double-yellow lines and obstructed the contraflow lane. This is just another symptom of the widespread lawlessness of drivers and their contempt for cyclists, which is underpinned by the knowledge that even if they get a ticket it will just be a piddling fine. Drivers who park like this should get a £200 fine. Fat chance, as long as the Daily Mail dictates transport policy. 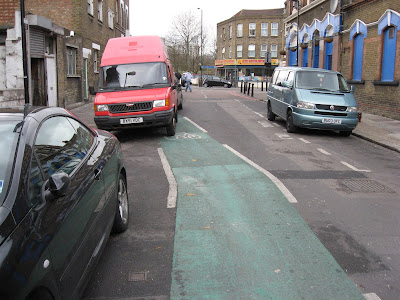 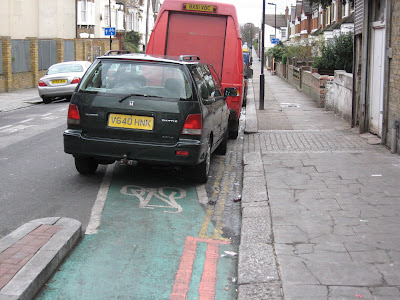 Posted by freewheeler at 12:04