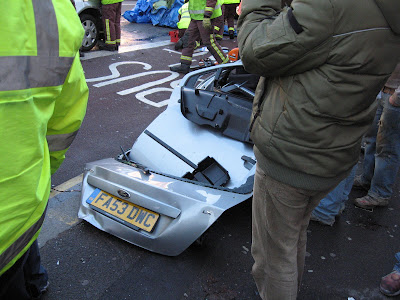 The aftermath of a smash on Lea Bridge Road.

The journalist Nick Davies recently published a blistering attack on the British press entitled Flat Earth News. It was enthusiastically reviewed by many fellow hacks.

One of Davies’s points about modern journalism is that

80% [of stories] were wholly, mainly or partially constructed from second-hand material, provided by news agencies and by the public relations industry.

Yesterday saw a classic instance, as media outlets ranging from BBC News to the press credulously recycled the glad tidings from what purported to be a new road safety campaign group, the Campaign for Safe Road Design

The message of this new body is that

Serious crashes can drop by more than half when roads are given a safety makeover – for example, safe crossings, crash barriers at the roadside, turning bays at junctions and good hazard markings.

This is classic road lobby garbage. It blames roads for crashes, not drivers.

According to The Campaign for Safe Road Design, a consortium of the UK’s leading road user, road safety and road design bodies, and launched at the House of Lords today (8 July) a third of Britain’s serious injuries or fatalities on the roads are preventable over the next 10 years with just a modest investment – primarily in signs, lines, kerbing and barriers.

What is striking about this so-called Campaign is that it excludes cycling organisations (such as the CTC), organisations which represent pedestrians (such as Living Streets) and genuine road safety campaign groups like RoadPeace and Brake. This so-called ‘Campaign’ is just the road lobby in its latest incarnation and its purpose is to demand more spending on roads while diverting attention from such topics as the massive reduction in traffic policing, cars deliberately designed to travel at speeds vastly in excess of the speed limit and the widespread flouting of traffic law by huge numbers of drivers. And not a word about the absurdity of the government condoning hands-free mobile phone use by drivers even when its own advisers have shown this to be dangerous. In reality 'road safety' is shaped by politics and vested interests, not rationality. The Campaign for Safe Road Design is, you can be quite certain, passionately opposed to Safe Car Design, such as manufacturing cars which go no faster than 70 mph, automatic speed limiters, or black boxes which register speed and other data at the time of a collision.

‘Road safety’ is a deeply compromised ideology, shaped by the road lobby, not by victim groups.

The traditional Road Safety establishment is incapable of confronting the problem properly because it is itself compromised, directly or ideologically, with the culprit [car] industry. Thus it promotes devices to protect motorists from the consequences of dangerous driving while instructing children to flee the streets and cyclists to adopt pathetic measures to save themselves when being run over. The Highway Code (though necessitated by motoring behaviour) is generally ignored, save for the purpose of castigating cyclists. 'Road Safety' produced the term 'Road Accident' to describe the serious and sometimes fatal result of people using lethal machinery recklessly or irresponsibly, fostering the notion that violence at the hands of criminals is somehow unavoidable or excusable when performed with a car - a view confirmed in the courts with depressing regularity. It proceeds at base from an acceptance that motorists have a right to expropriate public space (the streets) and threaten others while in their 'private' vehicles; 'Get out of the way of cars!' is the road safety officer's unswerving theme.

What cyclists and pedestrians need is not ‘road safety’ but danger reduction:

The road danger reduction approach to achieving safer roads seeks to reduce danger at source. This calls for a recognition of the fact that the principal source of danger on the road is motor vehicles.

The best book ever written debunking the failed, blood-soaked ideology of ‘road safety’ and arguing for its replacement by danger reduction is Death on the Streets by Robert Davis. It is long out of print but you can pick up a second hand copy here.
Posted by freewheeler at 08:06