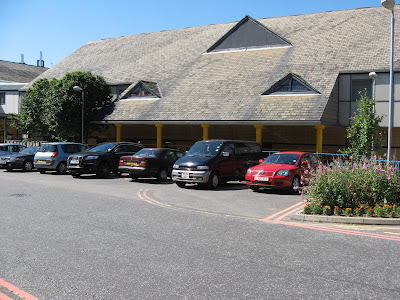 
I had an appointment at Whipps Cross Hospital as an outpatient. So I cycled. And when I got there:

There was parking for hundreds of cars but no cycle stands located by the numerous buildings used by members of the public.

Eventually I found one cycle parking site, which I suspect is the only cycle parking provision in the extensive grounds of this very large, car-choked hospital. It has cycle parking for just 16 bicycles. Perhaps this is supposed to accommodate the needs of staff as well as visitors.

All 16 stands were in use. So, like other cyclists, I had to use railings to D-lock my bike.

Now I tend to think this is a scandal and a disgrace but I’m not exactly surprised. Some years ago I had the same problem at another local hospital run by the Trust. It had ample car parking but not a single cycle stand. I wrote to the Trust and politely asked it to tell me how many car parking spaces and how many cycle stands are provided, at each local hospital and health facility used by members of the public.

Back came the answer:

We don’t know. We don't care. We have no intention of finding out. Fuck off you pathetic cyclist and next time come by car.

(The wording may have been a little different, but that was the gist.)

Well, things haven’t changed a bit. Promoting car dependency - that's the culture of this crap Trust. And the grounds of this shambolic, badly managed car-cluttered hospital site are just as unfriendly to pedestrians as they are to cyclists.

The Trust prefers tokenism over substance. (Which moron at the Trust came up with the category “Main road unsuitable for bikes!”, I wonder?) There’s a map of the car parks here, with the revelation that We have 400 spaces for patients and visitors and 700 spaces for staff. That says it all, doesn’t it? 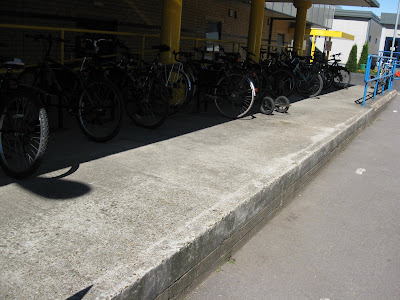 (Above and below) The 16 cycle stands. Inconveniently sited on a raised concrete platform. The stands also consist of a weird device evidently patented by the Spanish Inquisition, which you have to clamp around your bike. Several cyclists had given up trying to work out how to use these bizarre devices and just locked their bikes to the open frames. Unlike Sheffield stands, these Whipps Cross contraptions can only be used by a single bike. 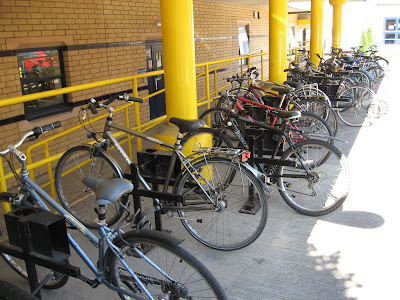