For whom 'The Bell' tolls 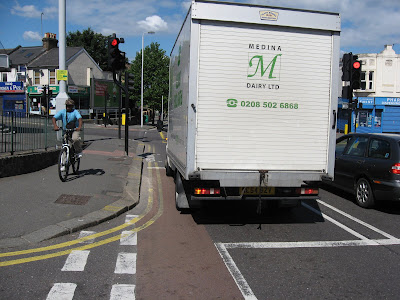 The Bell corner, Walthamstow - a major junction where Forest Road (A503) crosses the A112.

What can you see in this photograph (above)? A lot of people would probably only see a black youth riding a bicycle on the pavement. Another shocking example of anti-social behaviour and
lawless cycling, eh?

What I notice is that the drivers of both the white truck and the dark estate car have illegally driven into the Advanced Stop Lane for cyclists. Worse, the truck is turning left. Behaviour which displays total indifference to cyclists and dedicated cycling facilities and which, at worst, puts the lives of cyclists at risk. It happens all day long at the Bell corner, with thousands upon thousands of offences being committed. But I expect if you were to ask the Metropolitan Police how many tickets they had issued at this location over the past twelve months, the answer would be: none at all. The Met doesn't regard motoring offences as real crime, and sociologists have exposed the deep-seated prejudice of the police generally that enforcing traffic law would alienate the public. There is no basis for this prejudice but the Met has never been required to address its car supremacist bigotry. I have never seen any policing activity at the Bell, not once, even though this site is a lethal one, with an atrocious record of crashes and fatalities, and where red light jumping is another regular day-long occurrence.

Three arms of The Bell junction have cycle lanes which link to Advanced Stop Lines, and the fourth (the Chingford Road arm) has an ASL with the cycle lane fizzling out some 15 metres or so before the junction. Because the abuse of these facilities by drivers contemptuous of both cyclists and road traffic law is at prodigious levels, cyclists like this youth on the mountain bike adapt accordingly. Me, I have nerves of steel and I assert my rights as a lawful road user, so instead of riding on the pavement I ride in the road. And from time to time I have some moron blasting his horn at me because as a cyclist I am slowing him or her down.

(Below) Judging by the sand, there's been another crash here at the Bell corner. Just over a year ago a motorist travelling at excessive speed lost control and crashed into the traffic lights at this exact spot, dying in the wreckage of his car. (Enlarge the photo and you'll see that the car in the background signalling the intention to turn left is waiting in the ASL.) 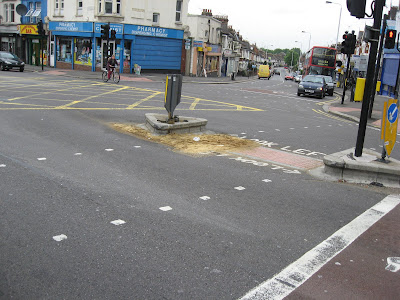 (Below) White van man. He didn't need to go in the cycle lane at all. I followed him along Forest Road on my bike as he drove another hundred metres before he turned left at the Bell corner, on to Hoe Street. Just another inconsiderate idiot for whom cycle lanes and cyclists have no existence. 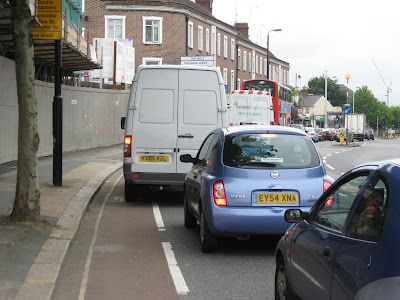 Posted by freewheeler at 09:40