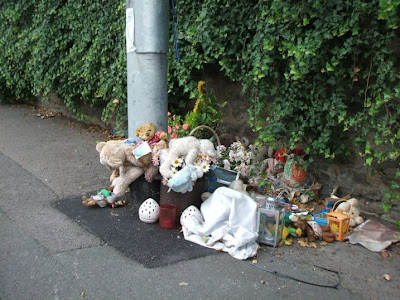 The roadside shrine to Tyrese Hannah, a seven year old run down and killed while walking along a pavement in Swindon. Swindon Council, headed by a man who has been disqualified for speeding, is proposing to get rid of all speed cameras in the town. (More below)

What a surprise! Up to a fifth of the MPs who have been debating the UK's climate change bill do not understand, or choose to ignore, the science on which it is based.

The government has cancelled the proposed autumn fuel tax rise, even though perpetuating our society's addiction to oil can only lead to ever greater vulnerability and worse shocks in future.

Cycle stand provision in Britain is laughably inadequate, yet the government continues to promote car dependency, and is now lavishing £6 billion on the latest futile attempt to ‘cure congestion’. Further plans to allow drivers to use motorway hard shoulders and possible tolled lanes were announced by the Government today as part of a six-year, £6 billion jambuster package.

Car driver David Sexton discovers the joy of cycling: Once, getting a car felt like a massive surge in freedom, and mobility, too. Not any more, not in London. Only a bike gives that sensation now.

Paris's self-service bicycle scheme has been hailed a success, despite a third of the bikes being vandalised or stolen in their first year of service – and with several turning up in foreign countries. Two users of Vélib' – which does not offer helmets – were crushed to death this year, both in collisions with lorries.

Also in France: A boy aged two-and-a-half died from dehydration after being left in a baking hot car after his parents went shopping and forgot about him.

A Tube station which has been closed since February while its escalators are replaced, could have remained open during the refit, it has been revealed. Local MP Andy Slaughter, who obtained documents under Freedom of Information Act, said people were "deliberately misled" over Shepherd's Bush closure. The documents show maintenance firm Metronet said the upgrade could proceed with the station still operating. The west London Central Line station, used by an estimated 20,000 people a day, was closed in February to replace its 80-year-old escalators and will remain shut until October. (If you want more detail, it can be found here.)

‘Car crime’ to the police is not deaths on the roads but damage to cars and theft of cars. A stolen 4X4 is a top priority, with the usual consequences.

In the West Country convicted drivers are being given the choice of a fine and penalty points or watching a 15 minute video. (That’s a difficult one, isn’t it?)

Drivers caught speeding in Cornwall are to be shown a hard hitting video of a fatal accident in a bid to save lives. Operation Slowdown is a joint initiative between the county council, Devon and Cornwall Police, and the Safety Camera Partnership. Fifty people were killed and more than 200 seriously injured in road accidents in the county last year. Those caught will be given the choice of a fine and penalty points, or a 15-minute educational session.

An off-duty police officer whose motorcycle killed a pedestrian as she walked home has been cleared of causing death by dangerous driving.

Pc Damien Myerscough, 42, was instead found guilty by a jury of driving without due care and attention. He was fined £2,000, disqualified from driving for 12 months and ordered to pay £1,000 costs at Bolton Crown Court. Lyndsay Oldham died instantly in the crash in Ainsworth, Bury, last year. Her family say justice was not done.

A bus driver who crushed a mother and daughter to death under the wheels of his single decker has been fined just £1,000.

Road safety campaigners have called for the charge of 'careless driving' to be scrapped after magistrates said they were powerless to give 53-year old John Scott a tougher punishment.
After the case, a spokesman for road safety charity Brake said: "The charge of careless driving should be scrapped. It is careless to spill a pint of milk, but driving in a way that is anything other than safe, and in line with the Highway Code, can only be described as dangerous or bad driving. If someone is seriously injured or killed by a bad driver, they should be charged with a charge that reflects the consequences of that bad driving and has a significant penalty.The charge of careless driving when a serious injury or death has occurred causes great offence to the injured victims and their families, who frequently view it as a trivial charge, adding extreme insult to injury."

Knife crime remains a hot media topic. Car-nage isn’t, even though So far this year, 58 people killed have been killed on Northern Ireland's roads. Nine of those deaths have been in the past 10 days.

Needless to say there is no moral panic in the mass media about deaths from head-on collisions:

Two "bright and beautiful" sisters and one of their boyfriends died in a head-on crash between a car and a van in Aberdeenshire. The victims were named locally as sisters Elena Putnam, 18, and Rachel Putnam, 20, and her boyfriend Mark Gardiner, 22, all from Cullen. The crash happened on the B9022 south of Portsoy on Monday night.The deaths take the total number of people killed on Grampian's roads to six in the last week.

A woman has died after a head-on collision involving two cars in the Highlands. Four other people were injured in the crash on the A82 at Onich, south of Fort William, on Saturday afternoon.

A student and his mother who died in a motorway crash hours after he graduated from university with first class honours. Ben Dalah, 21, from Edgware, his mother Nadia, 50, and father Freddy were travelling back from Birmingham University when their Saab was hit by a lorry and another car on the M6.

Inadequate traffic law enforcement and risible penalties for behaviour that threatens the lives of vulnerable road users have a predictable result:

Drivers appear to be shrugging off the threat of jail for causing fatal accidents while texting or talking on a mobile phone. Two Evening Standard photographers caught dozens of motorists using their phones while driving - despite a new crackdown which could mean up to 14 years in prison for offenders who kill. Among those pictured were cabbies, van drivers and commuters.

Tory run Swindon council wants to scrap all speed cameras in the town, to the delight of petrolheads everywhere.

Peter Greenhalgh, who is in charge of the council's transport policy, said that he would rather see the money spent on traffic calming and vehicle-activated speed signs, which cost as little as £5,000 to install.

It later emerged that the leader of Swindon council had a personal interest in the matter:

The leader of a council considering scrapping speed cameras was once banned from driving for speeding, it was revealed today. Swindon Borough Council is looking at proposals to get rid of cameras and find other ways to spend the £400,000 annual contribution it currently makes to the local safety camera partnership. Roderick Bluh, the leader of the Conservative-controlled council, was banned for three months after he collected 12 penalty points on his licence for speeding.

The blood-drenched farce of ‘road safety’ is rather underlined by this ‘complaint’: Drivers have complained about cameras being too hidden in the past, despite rules saying they must be clearly visible to oncoming drivers.

Swindon is where a speeding 19 year old driver careered on to a pavement and killed a child:

Tyrese, of Eastern Avenue, Walcot, had been out walking his dog Odi, with his mum, when a car lost control and hit him in Drove Road on Friday evening.Caroline was holding the dog as Lethbridge School pupil Tyrese walked ahead. He was instantly knocked unconscious. He died five and a half hours later at the Great Western Hospital.

It turned out that

The accident was the third serious incident of its kind in the last three months and residents have called for safety measures in Drove Road. Just last month a motorcyclist was involved in an accident in which his entire bike became wedged underneath a van. And at the end of last year a disabled man using the pedestrian crossing in Drove Road was hit by a car and needed emergency hospital treatment.Many people living in the neighbourhood say it was just a matter of time before there was a fatality.

Just three days after Tyrese was killed cars were still speeding past the spot where he was knocked down.

‘Losing control’ happens all the time. A teenager died and a man was seriously injured when the car they were travelling in overturned on a road in the Forest of Dean, Gloucestershire

A family had a remarkable escape when a car smashed through the wall of their bedroom as they slept with their five-month-old son. Joe Poulter, 40, and his partner Angela Foss, 38, were in bed when the Mercedes ploughed through the front of their cottage in Millfield, Sunderland, just after 2.30am. One neighbour said: "I heard cars driving along the street. They were racing each other. "It looked like one was trying to overtake the other when it went through the house.
Posted by freewheeler at 22:16