Six people were killed with knives in a 24 hour period in what the Mail calls an appalling day of bloodshed.

Seven killed in a brutal 24 hours shrieks The Independent.

These deaths are “shocking and tragic”, and “We will continue to make absolutely clear that carrying a knife is unacceptable in our society,” thunders Gordon Brown, who promises to announce urgent new measures on Monday. The Commissioner of the Metropolitan Police issued a rare appeal for calm in the capital. "The dreadful loss of life in just 24 hours graphically illustrates the need for everybody to pull together to put an end to this unacceptable violence," solemnly intones Sir Ian Blair.

Oh really? Well in the space of around 24 hours we had at least twelve violent deaths in Britain, none of which produced a whisper of comment from newspapers, politicians or senior policemen.

Dental nurse Dana-Leigh Trigger, 22, died following a one-car accident on the Inchmarlo to Glassel road near Banchory in Aberdeenshire. And businessman and philanthropist Lynn Wilson, 68, of Northamptonshire, died after his car was in a three-vehicle crash on the A96 at Forres in Moray. A Grampian Police spokesman told the BBC Scotland news website there had now been 16 deaths from 12 accidents on the region's roads this year.

This was followed by a spectacular collision in which

Six young people died in a crash between a car and a lorry in the early hours of the morning in Leicestershire. which was followed by Two drivers were killed and two teenage passengers seriously injured in a crash in East Sussex and Two men died, and another was taken to hospital, after a three vehicle collision on the N2 in County Monaghan. The crash, which involved a lorry and two vans near Castleblayney and Carrickmacross, happened at about 1300 BST on Thursday. 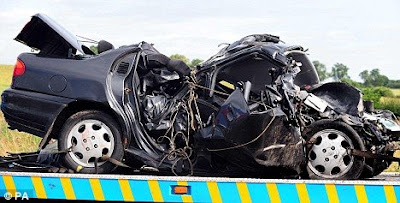 Figures from Leicestershire County Council show there have been four other serious injury accidents and two fatal collisions on a 3km (1.9 mile) stretch of the A607 through Kirby Bellars since 2003.

The speed limit on the road, which dips and curves, is 50mph but locals said drivers regularly top speeds of 65mph. Villagers in nearby Asfordby claimed the road was sometimes needlessly "treated like a race-track" by drivers unfamiliar with its bends.

Violence on the roads ought to be as unacceptable as knife crime. And in the wider context:

According to the British Crime Survey (BCS), overall violent crime has across England and Wales decreased by 41% since a peak in 1995. Knives are used in about 8% of violent incidents, according to the BCS, a level that has largely remained the same during the past decade.

Yet the newspapers which foam at the mouth about knife crime conventionally marginalize road violence. They employ motoring correspondents who swoon about fast cars and illegal speeds. They carry adverts for devices to alert drivers to the presence of speed cameras. Politicians simply don’t talk about road violence. And senior policemen belong to a culture which does not regard driver crime as real crime, and where traffic policing has been significantly reduced over the past decade.

The case of television presenter Anne Robinson, banned from driving for six months after her latest speeding offence, is revelatory.

The 63-year-old admitted by post that she drove at 43mph (69km/h) in a 30mph (48km/h) zone in Anglesey Road, Portsmouth, on 8 August last year. She was fined £100 with £50 costs. She received four penalty points, which were added to the 9 on her licence. She was disqualified under totting up as she already had nine points for three previous speeding convictions.

And when were these?

A perfect illustration of the farce of the current system, where drivers have to be repeatedly caught breaking the law, before they receive the mildest of punishments.

Another case this week is equally illuminating:

A 17-year-old student who died after driving into trees had been texting her mother and her friend about university offers minutes before.

Her friend Holly, from Ferndown, said she never felt safe as a passenger. Joanne would hit kerbs and then drive "increasingly badly" in a state of panic, she drove too fast around roundabouts and would tailgate the car in front, she said. "I felt extremely scared of Joanne's driving. I remember saying to my mother I did not think she should have passed her test," said Holly. "She would eat while driving and often drive with one hand on the steering wheel."

The roads are full of reckless, narcissistic life-threatening idiots like that driver and no daily newspaper, no politician and almost no senior police officer, gives a toss. And it is cyclists, pedestrians and safe drivers who are at the sharp end of this culture of reckless driving. Which is, you could say, at epidemic levels, with every day of the week an appalling day of bloodshed.

And while Gordon Brown says “We will continue to make absolutely clear that carrying a knife is unacceptable in our society,” there are some violent accessories which can be very visibly carried, which will attract no attention from the police, and which all national newspapers are happy to advertise. These lethal and fatuous devices, for example, which kill child pedestrians and child cyclists: 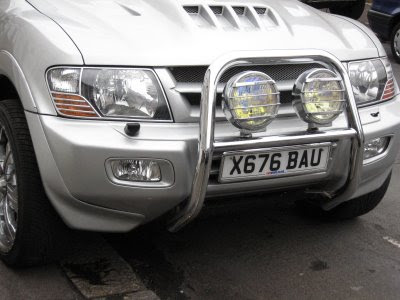 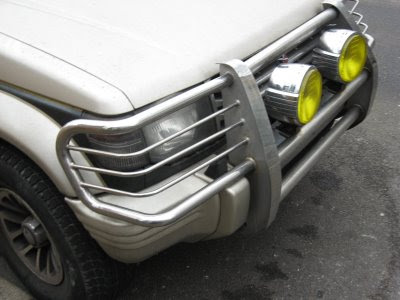 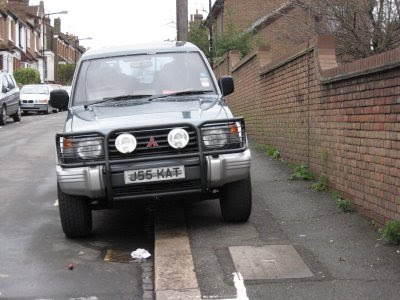 Posted by freewheeler at 14:06