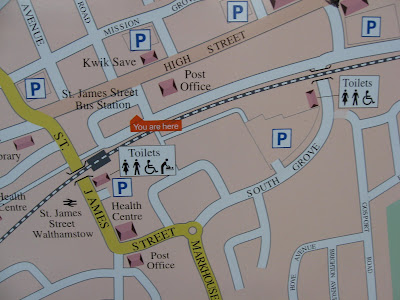 There's an amusing story on page 20 of the current issue of the Waltham Forest Guardian (April 10). Someone has spotted that a Council information board in Courtenay Mews E17 directs members of the public to two public lavatories which were shut down ages ago - one on South Grove and one on St James Street.

After being contacted by the Guardian, the sign was removed. A Council spokeswoman said: "The sign in Courtenay Mews is not new, and would appear it has been left erected in error."

I think the sign in question is this one (below). Despite what the paper says, the Council hasn't removed it since the Guardian story appeared. And it was recently sited here when the bus depot was renovated. Look at those sparkling clean new flagstones. So I'm afraid once again the Council is telling porkies. 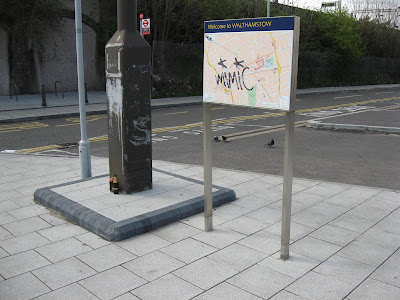 There is a second, identical sign (below), which also directs members of the public to toilets which are closed. This sign is by St James Street station. Situated by a heap of rubbish and spattered with graffiti, it aptly reads WELCOME TO WALTHAMSTOW. How many of these inaccurate information boards are there? I haven't a clue - and plainly neither has the Council, which is responsible for them. And that's not all... 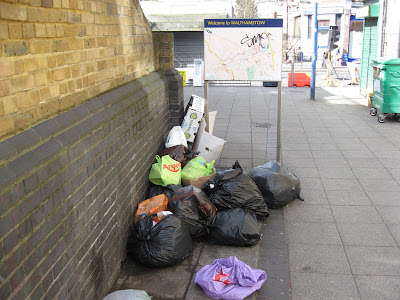 The Courtenay Mews bus depot redevelopment was presumably one of those joint ventures by Transport for London and the London Borough of Waltham Forest. It was completed several months back. The contractors never bothered to finish the job, and naturally nobody bothered to check up on them. Just yards from the Council's notorious mis-information sign you'll encounter unfinished flagstones as well as this weird vaccuum cleaner attachment, which mysteriously erupts out of the ground and travels a couple of metres in the direction of the High Steet. Let's hope it is not an alien probe. The thought of a slithery elongated alien crawling through Walthamstow to the Town Hall and running amok in the Members Room is just too awful to contemplate... 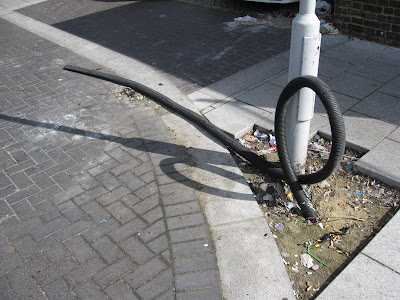 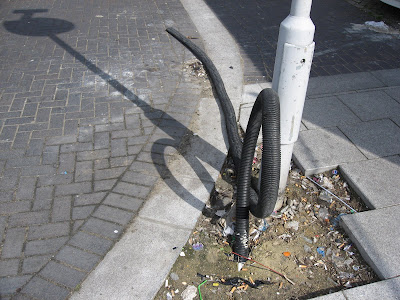