Outstanding indifference to pedestrians and cyclists 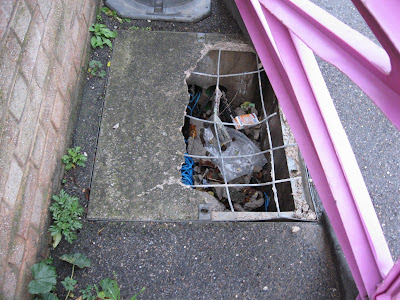 Back in December I noticed that there was a gaping hole in the pavement on Tower Hamlets Road E17. A utilities cover had been smashed, evidently by a Heavy Goods Vehicle driving over the pavement. Someone had obviously reported it to the Council because they’d been along and fenced it off. 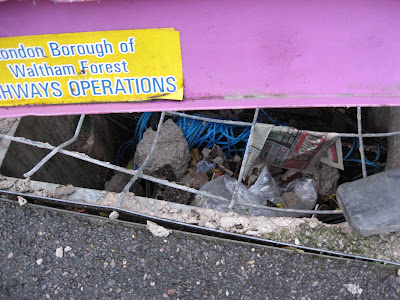 Since when: nothing. The privatized utility responsible for replacing the cover can’t be bothered. And the Council, which has a duty to keep the highway clear, couldn’t give a toss about pedestrians in general, let alone about the needs of wheelchair users and others with a mobility handicap. And you can’t get past in a wheelchair. It’s been like that for at least 4 months now and the Council has done nothing to get it rectified. 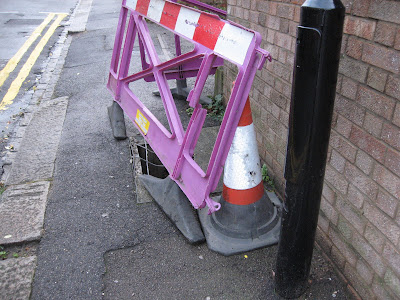 And in February when I cycled along this street I noticed that there was water leaking out of the road near the hole in the pavement, creating a huge sheet of ice when temperatures dropped below zero. I blogged about it. And once again the Council has done nothing whatever to make Thames Water plug the leak. As far as this crap Council is concerned, dangerous hazards for cyclists are of no concern. The road continues to turn into a sheet of ice every time it freezes.

But wait! The Council has done one thing in the past 4 months. To the lighting column by the gaping hole in the pavement a new sign has appeared – one of this sort warning motorists that someone might want to steal their Sat Nav.

As usual, it’s driving and motoring which are closest to the heart of this Council’s interests, whereas pedestrians and cyclists are of no concern at all and just have to put up with months of obstruction and danger.
Posted by freewheeler at 09:55