Council gives away half of Buckingham Road E10 ! 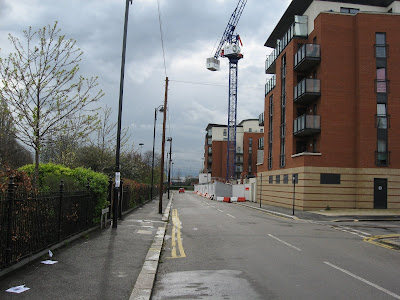 Buckingham Road E10, looking towards Oliver Road from the junction with Brisbane Road. The proposal is to build an eight storey block, with the loss of the road and both pavements. The development will extend from all the buildings shown above, as far as the hedge on the left (and perhaps beyond, into the local park).

Wake up, people! Having flogged off numerous council buildings and handed over public land to property development, this Council is now proposing to hand over half of Buckingham Road for an 8 storey block. If I have understood the plans correctly, this development will also grab a slice of the local park. This proposal is without precedent.

Check out the details in the ‘public notices’ section of the Council's free propaganda newspaper wfm, April 7 issue, page 12. (Strangely, the Notice is not advertised in the Waltham Forest Guardian.) This concerns the permanent stopping up of this section of the road and pavements on Buckingham Road.

The legal announcement in wfm states that copies of the Draft Order and Plan ‘may be obtain (sic) free of charge, quoting reference number LE/MAK/55925’ from the Town Hall.

You have until Monday 5 May to register an objection. Apart from being of interest to the residents who live in what will be left of Buckingham Road, this development ought to excite the interest of all local environmental groups.

This latest mini-skyscraper scheme is smuggled in under the guise of modernising Leyton Orient football club’s South Stand. Not that the O’s are exactly short of space, since the pitch is abnormally large at 115 x 80m (standard FIFA pitch size is 105 x 68m). And there’s also the fact that a new location is on the cards: Chairman Barry Hearn is confident Leyton Orient will be playing in the Olympic Stadium after the London games in 2012. The O's have long been considered favourites to occupy the £500million arena.

Buckingham Road runs between High Road Leyton and Oliver Road. How important it is as a route for cyclists and pedestrians is not known because the Council naturally hasn’t bothered to measure its use by either group. If this land isn't needed than the road could have been closed to motor vehicles, the park extended, cycle parking for the football stadium provided, and a cycle lane provided that would link up with the Ruckholt Road commuter cycling route. But that of course would only benefit walkers, cyclists and the environment, not a property developer.

Football fans who pour out of the west stand will now have to find a different route to the High Road. And an 8 storey block is plainly going to ruin the ambiance of the local park which it will run alongside.

Curiously, work on the development appears to have started before the period for objections has expired, and before any possible objections have been considered. The developers have also already stopped up the footway and part of the carriageway before the legal process has run its course.

I hope this isn’t illegal. If you think it might be you can always make representations to the planning authority – an impartial body famous for its high standards, known as ‘the London Borough of Waltham Forest’ - which is, of course, the body promoting the development. 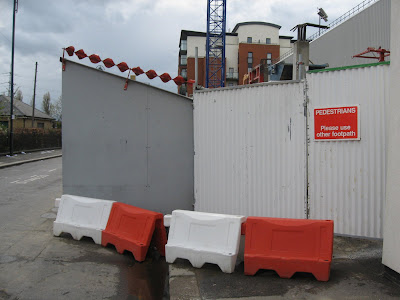 (Above.) The pavement on the stadium side of Buckingham Road has already been stopped up, prior to the public consultation process about a proposed stopping up. 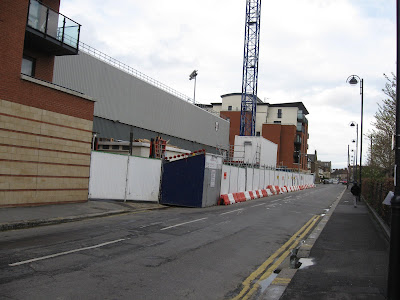 The proposed development site seen from Oliver Road. It will grab all the road, both pavements and (apparently) part of the park on the right.
Posted by freewheeler at 08:15