Firstly, they are far less effective than road humps at reducing vehicle speeds and can easily be driven over at speeds greater than 20 mph. This is of some considerable significance when you bear in mind that 10 per cent of pedestrians die when hit by a car at 20mph compared with 50 per cent at 30mph. Camden Cycling Campaign noted that on one local road supposedly 'calmed' in this way speed surveys indicate that even in the presence of the speed cushions 15% of drivers are exceeding 27.6 mph on this stretch of road.

Secondly, they actively encourage drivers to drive in an erratic fashion. If there is a single speed cushion and no car parked at the side some drivers swerve either to the kerb or into the opposite lane to avoid passing over the cushion. More commonly drivers change direction in order to get both sets of wheels in the gaps between the cushions. Usually this involves drivers steering into the centre of two lanes, with the result that they approach cyclists coming towards them head on. The danger to cyclists is well known: Speed cushions are likely to be shallower than road humps with gently tapering sides and by straddling the cushion, or crossing it with only two wheels, cars may reduce its traffic calming effect. As cyclists may be expected to bypass the speed cushions by using the space between kerb and cushion this potential abuse by cars is likely to have a detrimental impact on the safety of cyclists. 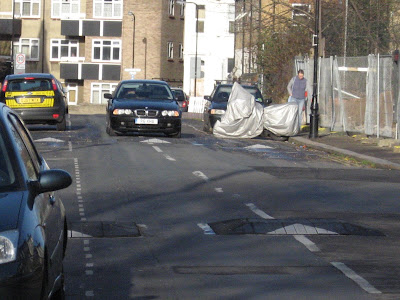 The 'three in a row' pattern, with a motorist driving down the centre of the carriageway in order to get both sets of wheels in the gaps. Speed cushions encourage drivers to continue down the middle of the road, to the detriment of cyclists coming in the opposite direction.

Thirdly, speed cushions cannot be used at pedestrian crossing places because they can constitute a trip hazard.

These cushions (below, on Grove Road E17) are stupidly sited at a pedestrian crossing point between Beulah Path and College Road - just the place where drivers ought not to be encouraged to swerve erratically in order to drive through the gaps. 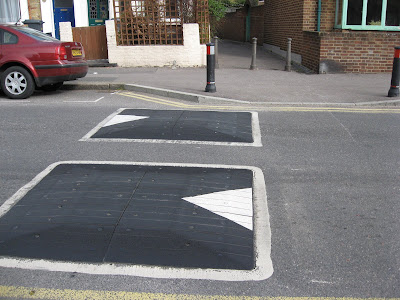 Fourthly, the rubber ones (which, like those in the photographs above, are the ones mostly used in Waltham Forest) are slippery in wet weather.

Cyclists and cycle campaign groups do not like speed cushions. Thus Southwark Cyclists say (pdf download): We do not regard speed cushions as effective forms of traffic calming. Traffic may veer to avoid them, moving into the centre of the road. Cyclists are forced into vulnerable positions on the road, either right in the gutter or in the centre of the road, potentially into the on-coming traffic. Alternatively, vehicles with wider axles are able to ignore them.

There is anecdotal evidence of how individual cyclists dislike them. In the Comments after this news item: I used to cycle a lot around these lanes, and as a cyclist I found the speed cushions actually increased the risk to cyclists, as drivers were distracted with the effort to centre their cars over the humps so did not pay proper attention to other road users, and because the cars are centred over the humps they are often travelling to close when passing cyclists.

So: speed cushions don’t cut speed and actually make roads more dangerous for cyclists. Why, then, do local authorities continue to install them?

Basically because both bus companies and the emergency services don’t like road humps. They make for a bumpy bus ride. And they slow down fire engines, police cars and ambulances. Whereas speed cushions can be driven over at much faster speeds, without so much vibration.

The London Ambulance Service has always been the most vocal critic of road humps (and is frequently quoted on petrolhead websites like the self-styled ‘Association of British Drivers’). The London Ambulance Service has claimed that the 30,000 humps on the capital’s roads cause up to 500 deaths a year because its crews suffer delays in reaching victims of cardiac arrest. That suspiciously neat statistic needs to be regarded with scepticism. It appears to have no support from other health professionals.

It is also the case that the London Ambulance Service is conspicuously silent about road deaths as a health issue.

In fact slowing down ambulances may not always be a bad thing, bearing in mind that London ambulances are involved in an average of more than four crashes a day. These crashes cost more than £300,000 a month in compensation, legal fees and repair bills.

If the London Ambulance Service is so concerned about issues of life and death it is remarkable that it is utterly indifferent about identifying how many people die or are injured in ambulance crashes: An LAS spokeswoman insisted all accidents involving its vehicles were investigated but said the service does not hold data on the number of people injured or killed in such crashes.

The other obvious point is that the biggest thing slowing down emergency vehicles is not road humps but congestion. The average central London traffic speed is just 10mph. The Bristol average is worst at 16.8mph, followed by 16.9mph for the whole of London. The next-slowest cities were Glasgow - 17.3mph - followed by Southampton and Liverpool, both 17.8mph, and then Manchester with 18.8mph.

Road humps are a very crude way of slowing down vehicles. The technology exists to fit every motor vehicle with a device which would automatically reduce speed to match the speed limit. This is opposed by the motor lobby, which even resists ‘black box’ technology, which would record vehicle speed at the time of a collision.

Ironically such technology was developed to research airbags inflating when drivers went over road humps and is now fitted to luxury cars as an incidental accessory:

Singh's trial used evidence from a device fitted to the airbag system of his Range Rover - the first time such technology has played a role in a British court. The Event Data Recorder, similar to an aircraft's black box, was used to establish that a force equivalent to 42mph was lost in one fifth of a second in the crash. This helped police put the defendant's speed at around 72mph.

Data recorders in airbags can record a car's speed and deceleration and other information such as the pressure on a brake pedal at the time of a crash. Car manufacturers began installing them in vehicles in the 1990s to test airbag performance - early airbags often wrongly deployed in cars being driven over bumps.

Road humps, for all their crudity, have a track record of success in reducing casualties. Speed cushions, by contrast, are irrational, ineffective and potentially dangerous to cyclists and pedestrians. Instead of making the roads safer they are more likely to deter cycling by agitating traffic, not calming it.

But they continue to be installed, and the London Borough of Waltham Forest has no plans to get rid of the ones which now exist on scores (hundreds?) of local streets. As always, so-called ‘road safety’ is determined by politics rather than science and rationality.

And it is characteristically dishonest of this Council to claim that speed cushions ‘are preferred by…cyclists’ to road humps. They aren’t.
Posted by freewheeler at 08:18