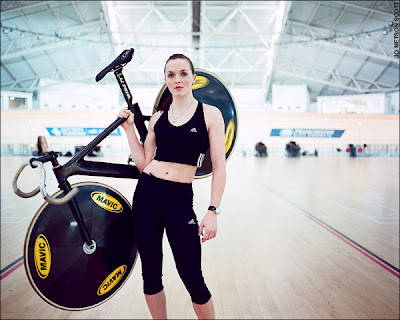 Olympic champion cyclist Victoria Pendleton says Manchester road-hogs put her life at risk and shout abuse at her when she trains on the city's streets.

Something which all urban cyclists have surely experienced. But then hardly surprising when a car manufacturer actually makes a vehicle called ‘The Intimidator’. It does a planet-wrecking 9 miles to the gallon.

The Toyota Hilux Intimidator delivers all the reliability and work-ready ability that you would expect from a Hilux, with an extra boost of power, performance and style. A potent 3.0-litre diesel engine is the perfect partner for the Hilux Intimidator, while power is upped to an impressive 163bhp. Modified front-end styling and bigger wheels give a visceral display of strength and style.

Needless to say no politician or senior police officer has ever had a bad word to say about this grotesque vehicle. (This example can be found on a street in Walthamstow, and the Council continues to extend footway parking exemptions in order to accomodate residents who choose to purchase 4X4s and have nowhere to park them but a narrow street.) 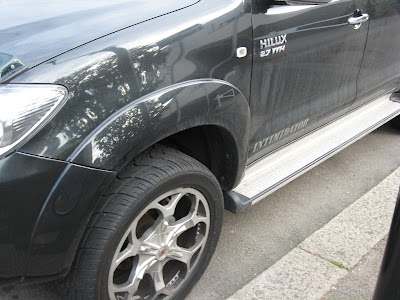 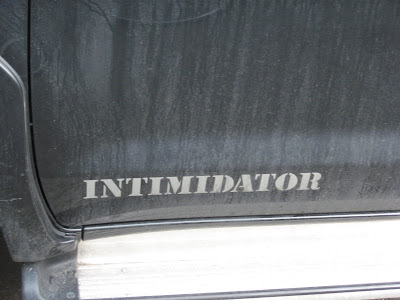 No cyclist will be surprised by this:

British motorists have become a safety menace on France's roads, regularly flouting the speed limits after crossing the Channel, French police say. In a four-hour period last weekend, on the A26 motorway near Saint-Omer, a Franco-British patrol stopped 30 cars for breaking the 130km/h (80mph) limit. All but two were from Britain. British drivers have committed half of the most serious speeding offences - over 125mph - in the region this year.

A grieving Lochaber family have demanded a review of the way police investigated a crash which killed a champion cyclist. Jason MacIntyre’s relatives also want the Health and Safety Executive (HSE) to investigate whether Highland Council breached regulations on driving at work. Mr MacIntyre died on January 15 after being struck by a local authority pick-up truck on the outskirts of Fort William while he was on a training run. The driver, Robert McTaggart, 36, has since been fined £500 and banned from the road for six months after admitting driving carelessly when he pulled across the path of the father-of-two, a Commonwealth and Olympic games hopeful.

Mr MacIntyre’s family has lodged complaints with Ian Latimer, Northern Constabulary’s chief constable, Highland Council and the Health and Safety Executive, and are also calling for a fatal accident inquiry to be held. The family have queried whether a mobile phone had been in use at the time of the accident, and were allegedly advised that investigating officers “did not think it was relevant”.

Mr MacIntyre’s father, David, said yesterday that procedures for investigating road deaths in Scotland had not been revised for a number of years despite being updated last year to provide a higher investigative standard in England and Wales. “The manual for Scotland contains no direct reference to the use of a mobile phone by the offending driver,” said Mr MacIntyre.

The family initially demanded that death by dangerous driving charges be brought against McTaggart, 36, of 36 Alma Road, Fort William, but their pleas were rejected after a Crown Office review by two counsel.

And while on the subject of drivers who put cyclists lives at risk, let me register the fact that the woman driver of a silver car reg. R578 HFS was driving erratically along Aubrey Road E17 at 10.40 am on Thursday, with one hand on the steering wheel and the other clutching a mobile phone, which she was talking into.

The streets of the London Borough of Waltham Forest are full of dangerous prospective killers and the Metropolitan Police couldn’t give a toss - not when their weapon of choice has four wheels. Hardly surprising when some of the most dangerous drivers on London’s roads are cops:

A COP car with flashing blue lights hit and killed a mum — as it ferried a takeaway to officers, it was claimed last night. The 61-year-old woman was mown down as she walked with her husband and son. Witnesses said the driver of the marked police car had his sirens and lights switched on.

But a source claimed the young driver was on a food dash — not responding to an emergency call. An officer said: “We were told it was a young driver who recently passed his police driving qualification. He had his sirens and blue lights on but there was never any 999 call. He had gone out to get a takeaway for his mates.”

The woman, named locally as Sandy Simpson, was pronounced dead at the scene. Witness Ruth Oswald, 53, said: “I heard the siren and then a bang. It was just horrific. The woman was lying in the road and the officer who’d been driving was leaning over her.

Witnesses said they saw her distraught husband bang on the side of the police car, screaming: "You've killed my wife" as she lay in the road. One report alleged the driver was using the police siren and blue lights but was not rushing to an emergency, and had in fact been collecting a takeaway for colleagues.
Posted by freewheeler at 07:17