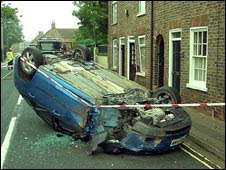 Greenhouse gas emissions could pass a critical tipping point and trigger runaway global warming within the next 100 months. According to the UN's experts, greenhouse gas levels in the atmosphere, which are at around 430 parts per million, would have to be stabilised at 450 ppm to avoid a rise of more than 2C. Simms and Victoria Johnson made a conservative estimate of future emissions based on six greenhouse gases and other pollutants, such as aerosols, which have a cooling effect. They predict that 100 months from today emissions will rise above the critical 450ppm threshold. According to the government's 2006 report on climate change by Nicholas Stern, a 2C rise could release vast quantities of carbon stored in soils and permafrost, see 15%-40% of land species threatened with extinction, and up to 4 billion people experiencing water shortages.

A group of environmental campaigners will risk jail next week when they breach a court ruling to join thousands of activists at this year's climate camp.

The UK’s total greenhouse gas emissions are 49% higher than reported emissions. A recent little-publicised report for the government department Defra showed that rather than going down 5% as the government claimed, CO2 emissions have gone up 18% between 1992 and 2004 when all emissions are counted. The government sat on the SEI report since February, tested its calculations, then published it in an obscure press release on 2 July.

A major policy U-turn by Boris Johnson has opened the way for the expansion of City Airport, but a final decision is likely to be delayed. The Mayor has written to Newham council voicing his support for plans to increase the number of flights out of the airport by 50 per cent. He had previously objected on the grounds of reducing carbon emissions and his policy U-turn has angered environmental lobbyists. If the plans go ahead air traffic could increase from 80,000 flights a year to 120,000. Friend of the Earth said the decision backtracks on his promises to reduce carbon emissions in London.

A Lamborghini was flown 6,500 miles for a service:

Jenny Evans, from green campaign group Plane Stupidsaid: "This horrifies me. It is another example of how rich people exploit and pollute the planet because of their money." Friends of the Earth transport campaigner Richard Dyer said: "We urge the individual to get their car serviced closer to home." But a Lamborghini spokesman said there was "kudos" in serving a car in London - even insisting the trip was not a one-off.

In January 1997, a one-way trip from London to Manchester, booked on the day of travel without any discount cost £53 and a return ticket was £95. Today the same journeys will cost £115 and £230 respectively. The next batch of rises in January are expected to be amongst the highest for many years.

Andrew Grice asks: how Green are the Tories? Stephen Hale, director of the Green Alliance, said: "David Cameron's environmental speeches cannot be faulted. But the gap between his aspirations and commitments is alarming.

Spain has launched an ambitious plan to reduce energy consumption and save millions of euros on oil imports by cutting the speed limit to 50mph and handing out millions of low-energy use light bulbs. With the introduction of a broad swathe of measures between now and 2014, Spain's socialist government hopes to reduce Spain's oil imports by 10% per year, cutting consumption by 44m barrels and saving €4.14bn (£3.25bn). The speed limit will be cut on dual carriageways outside major cities by 20%, bringing it in line with Barcelona, which has already set a top speed of 80 kph (50 mph).

The violent death of a small boy which attracted virtually no media attention: A 10-year-old boy has died after he was involved in a collision while he was riding a bike.

Police raided the offices of BMW and arrested the company’s executives for conspiring to manufacture machines deliberately designed to break the law and used to kill a small child. (No, of course they didn’t. Killing a child while driving at 80 mph isn’t regarded as an offence, just an unfortunate accident):

Parents were yesterday warned to keep young children properly restrained in the car after a toddler was thrown 150ft to her death when the family's BMW crashed while she was on her mother's lap. Eighteen-month- old Angel Nguyen had been strapped into a child seat until moments before the accident at 80mph on the M4. No one was prosecuted over the tragedy.

Tell me something new:

Dangerous driving habits are on the rise, according to research. Two thirds of motorists admitted to risky behaviour in the past year - 3 per cent more than did last year - a survey found.

A man has been arrested after three people were killed in a head-on car crash in Leeds.

A Porsche motorist has been arrested on suspicion of dangerous driving after a crash with an open-top bus in Dorset which left the bus on its side and threw passengers from the vehicle. Despite initial fears of serious injuries, all those on the bus escaped with minor ailments and are said by police to have been "incredibly lucky". Dorset Police said the driver of the Porsche, a 43-year-old man from Wimborne, was arrested at the scene. He was driving away from the chain ferry which links Studland with the exclusive Sandbanks peninsular when the head-on crash occurred.

A grieving mother yesterday condemned an uninsured driver who was handed a £265 fine for causing a crash which resulted in the death of her daughter.

Despite previous convictions for driving without insurance and without a licence,
Clements walked free. He was fined £25 for driving without a licence, £40 for having a defective tyre and £200 for having no insurance. He was also ordered to £80 costs and given eight penalty points on his driving licence. The trainee forklift-truck driver was banned from driving for a year under the totting up rules because he already had six points for his previous offences in March last year.

A fraudster who used a dead woman's disabled parking badge has been fined £750.

Charanjeev Singh Virdee, 32, of Harrow, admitted using the badge on which the expiry date had been altered and was also ordered to pay £500 costs by West London magistrates. He dishonestly avoided up to £13,000 a year in parking fees by using the badge he found in the opticians he owns and used it to park in disabled bays close to Ladbroke Grove. Following a surveillance operation by officers from Kensington and Chelsea council, Virdee was asked whose badge he was using. He claimed it was his aunt's and that he had dropped her off in Portobello Road that morning.

A woman has told how she escaped injury when a car ploughed into the front of her house damaging gas pipes and knocking out the electricity supply. Hannah Drury was in her bedroom on Flatgate, in Howden, just before 0600 BST when a Ford Focus car hit her house before flipping onto its roof.

Fifteen lorries crashing in her home in 18 years has nudged Amanda Sandland to one conclusion - that her dream cottage has become a nightmare.

Blaming the road, not high-speed morons who recklessly overtake:

A Conservative MSP has demanded that improving the A9 between Perth and the Highlands is made one of the Scottish Government's key priorities in 2008. Mid Scotland and Fife MSP Murdo Fraser has branded the route a "killer road". The 112-mile stretch of the road between Perth and Inverness is seen as one of the most dangerous in Scotland, with scores of fatalities in recent years.

A woman was caught drink-driving after a distressed child was seen shouting "stop mummy driving" and banging on the windows of a car. Central Scotland Police said the car carrying the five-year-old girl was stopped in Falkirk on Sunday afternoon. When breathalysed, the 35-year-old woman was found to be four times over the legal drink drive limit.

As well as telling you not to drink alcohol on the bus, a recorded announcement now tells you which bus you are on at every stop, as though you're Keith Richards circa 1974, and have just woken up naked on top of a mountain and require assistance in ascertaining your precise coordinates following what began as a quiet night in with friends in Chelsea. "You are in Brazil. You may be experiencing a headache."
Posted by freewheeler at 08:18