Giant spiders have been banned from a roundabout because of fears they could scare drivers into crashing. The Highways Agency is forcing Arundel Gallery Trail to remove the sculptures from the A27 roundabout only ten days after they were installed because of concerns they could cause an accident. The Causeway roundabout has been used as a gallery for up-and-coming artists for more than a decade. But an agency investigation, sparked by one complaint, concluded the arachnoid art was too dangerous because it could distract motorists.

The absurdity and hyprocrisy of the car-obsessed Highways Agency doesn't get much richer than this, does it? The Highways Agency would never dream of preventing local authorities from installing advertising panels on pavements, designed to attract the attention of passing motorists. These panels are ugly, they are blatantly obstructive for pedestrians, and they are dangerous when sited like the one below, which conceals pedestrians from vehicles turning left into the Walthamstow station drop-off bay.

Earlier this year a violent gust of wind (another symptom of extreme weather associated with climate change?) brought wooden panelling crashing down on to the pavement. Any pedestrian passing at the time, and forced towards the panelling by that crap advertising panel, would have been crushed. Luckily no one was passing at the time. The panelling was put back up and that obstructive and distracting advertising panel is still there. But don't expect this crap council or the car supremacist Highways Agency to give a toss about danger to pedestrians. 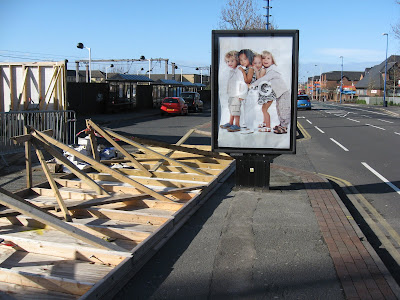 The hypocrisy of the Highways Agency is underlined by the presence of this massive advertising board (below), placed at the Crooked Billet roundabout, which has been the scene of many crashes. Its capacity to distract is enhanced by the fact that it is an automated board, which changes every thirty seconds as the metal slats turn over to reveal a different advert. 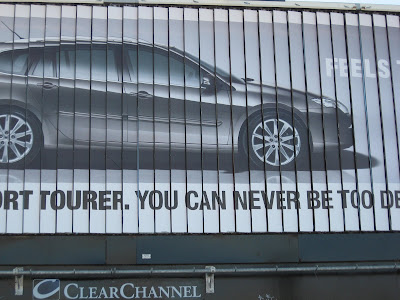 The Highways Agency has always loathed cyclists and pedestrians and been indifferent to their safety. It forces them into subterranean transport sewers like this one (below), at the Waterworks roundabout. Which is not only unpleasant, neglected, badly maintained, and home to a family of rats, but also, in terms of its isolation, a dangerous and threatening location, with the ever-present risk of assault and robbery. 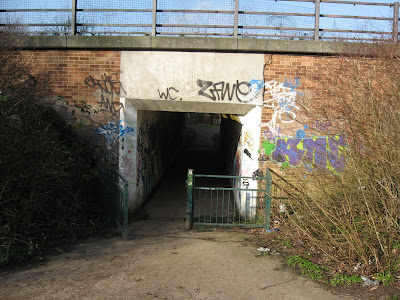 Posted by freewheeler at 10:00