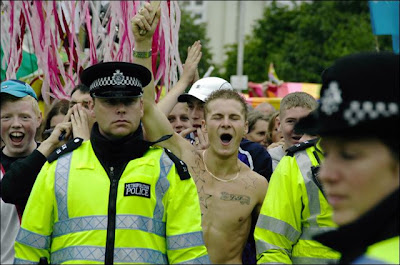 Cycling to this year’s Climate Camp in Kent would be inadvisable, since according to the website

police are taking all kinds of things off people that they think can be used for actions, ranging from kids crayons to bike-locks.

Kent Police said it had 1,400 officers from 26 forces on standby during the Climate Camp. Assistant Chief Constable Gary Beautridge, said: "We have made it clear to the protesters that we expect them to abide by the law.”

Kent police needless to say have no such expectations when it comes to motorists. Kent police are so indifferent to driver criminality that people in Kent have to make their own traffic police.

You can be quite certain that Kent police would never deploy 1,400 officers in a massive crackdown on drivers who jump red lights, use mobile phones, or stop in Advanced Stop Lines. Kent police have slashed their traffic police numbers, like every other constabulary in Britain. This may be why of all the counties of England, Kent has the third worst record for deaths and injuries

There were a total of 4,779 crashes on Kent roads (excluding Medway), which resulted in 6,466 casualties. As a result 91 people died and 632 road users were seriously injured.

Kent even helps maniac drivers by obligingly supplying a map showing the sites of all speed cameras, including mobile ones.

Kent is a place where officers like Ian Pointon of Kent Police Federation whine that "Speed cameras need to be used wisely - there is a danger they alienate the otherwise law-abiding public," he said.

Environmental campaigners and politicians criticised the police last night after around 200 officers raided a climate camp, seizing hundreds of items that they claimed could be used to break the law. Activists at the camp, which starts today with a series of workshops on sustainable energy and social justice, said the raid aimed to disrupt legitimate protest.

Green MEP Carolyn Lucas, who is attending the week-long event, said police had confiscated hundreds of items including disabled access ramps, board games and fire safety equipment. "The police seem to be trying to stop Kingsnorth climate camp going ahead and if this is the intention it is illegal and I will be drawing it to the attention of the European Commission as well as the UK authorities," she said.

Shortly after 5am this morning, police mounted an operation at the climate camp.

Several vans advanced on the main gate and a stand off ensued. During this distraction, large numbers of police attacked the rear gate, smashing windows of vehicles park at the rare gate. Police dogs units were posted while at least one vehicle was towed away. Many officers wore no shoulder numbers and refused to identify themselves or show warrant cards as they ordered people around. Several arrests were made as campers rushed to the scene.

The standoff at both gates is still taking place over an hour later and observers report more riot vans being dispatched to the camp. Batons were used to attack campers and a line of riot cops advanced. Medics were rushed to scene as reports of campers being attacked with pepper spray came in. Several more arrests were made and ambulances have been called to attend injuries. 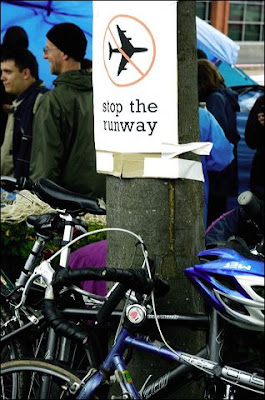 Posted by freewheeler at 12:07