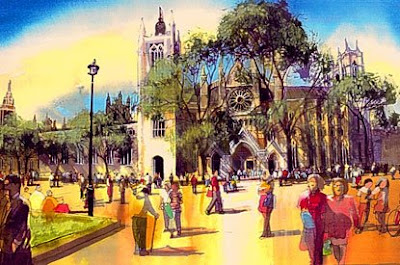 Goodbye to all that…

Boris Johnson had previously said he would put his predecessor's proposals on hold to study the impact on motorists. But today he announced he will cancel the £18 million plans, claiming the move would cost too much, destroy green space and cause congestion. Transport for London advised the Mayor that the required pedestrianisation would have a significant negative impact on traffic flow, not only in Westminster but also in central London.

Green Party London Assembly Member Jenny Jones said: "The pedestrianisation of Parliament Square was a key decision and an important move to make London more beautiful and tourist friendly. This is a disastrous and idiotic decision." Speaking to Building Design magazine, Ken Livingstone said: "This is an administration that is basically cost-cutting. Boris doesn't want to end up in upsetting the motorists and the AA. It should be an amazing world square, not a squalid traffic roundabout."

Developer St Modwen submitted plans to Newham council on 1 May, the day Mr Johnson deposed Ken Livingstone as Mayor. Campaigners had hoped the Tory's manifesto pledge to accept applications for skyscrapers only in existing "clusters", such as the City and Docklands, meant the proposals would be blocked. But in a letter to the council, deputy mayor Ian Clement, who is handling the application for the Greater London Authority, said the scheme would be acceptable if the design quality of the tower "could be further demonstrated".

Don’t expect to see this happen with the London Olympics: The authorities have already removed one million of the city’s 3.3 million cars from the roads.

Naked ambition. A pun exhaustively used by all the papers this week as they contemplate a naked woman on a bike.

The UK should take active steps to prepare for dangerous climate change of perhaps 4C according to one of the government's chief scientific advisers. In policy areas such as flood protection, agriculture and coastal erosion Professor Bob Watson said the country should plan for the effects of a 4C global average rise on pre-industrial levels.

Everything now hinges on stopping coal. Whether we prevent runaway climate change largely depends on whether we keep using the most carbon-intensive fossil fuel. Unless we either leave it - or the carbon dioxide it produces - in the ground, human development will start spiralling backwards. The more coal is burnt, the smaller are our chances of future comfort and prosperity.

It is policing on a scale rarely before seen in Kent.
• Up to 1,400 officers on stand-by.
• Police deployed from more than half of the forces in England and Wales.
• Helicopters, boat patrols, mounted units and riot squads.
All for what is said to be a peaceful protest of 1,100 people.

There was a heavy police presence at Kingsnorth, with helicopters flying overhead and tense scenes as officers searched protesters and checked identities

I am horrified that police here have used pepper spray, riot gear, physical intimidation, and indulged in bizarre confiscations. It almost feels like an attempt to inflame tensions and provoke protesters into less peaceful behaviour.

George Monbiot argues that Environmentalism is the most politically diverse movement in history.

THE last ice age 13,000 years ago took hold in just one year, more than ten times quicker than previously believed, scientists have warned. Rather than a gradual cooling over a decade, the ice age plunged Europe into the deep freeze, German Research Centre for Geosciences at Potsdam said. The new findings will add to fears of a serious risk of this happening again in the UK and western Europe – and soon.

A freak tornado killed three people and injured nine as it destroyed houses, overturned cars and ripped trees out of the ground in France last night. The flash storm gutted up to 40 homes in just minutes as it battered Hautmont and three other small towns in the north of the country.

The evacuation of residents at several farms in Renfrewshire has begun after heavy weekend rain put huge strain on the walls of a reservoir. "It's really a surreal situation. One minute you're playing with your daughters - we'd cut the grass, we'd been weeding - and the next minute they're saying you need to leave your house. It's not the kind of thing you normally expect."

THE offshore oil industry is legally polluting the North Sea, Greenpeace claimed yesterday. The environmental pressure group's German branch said it had filmed large oil screens around oil installations north-east of Shetland. Dr Christian Bussau, a biologist working for Greenpeace in Hamburg, said the industry had discharged 13,000 tonnes of oil into the North Sea in 2005, almost ten times the amount in 1984. Dr Bussau said that more oil was discharged from older oilfields as the amount of water in the oil exploited increased. Greenpeace is now calling on North Sea countries to bring in legislation to stop the legal discharge of oil into the sea.

Asleep at the wheel:

A coroner has vowed to lobby the government to reduce the number of road deaths caused by a sleeping disorder. Merseyside Coroner Christopher Sumner announced his intention while passing a verdict of accidental death at the inquest of Toby Tweddell. Mr Tweddell, 25, from Sale, Greater Manchester, was killed when a lorry driver ploughed into a queue of traffic on the M62 in Merseyside in 2006. Lorry driver Colin Wrighton had been suffering obstructive sleep apnoea. Mr Tweddell's parents, Nic and Monica, want compulsory screening of sleep apnoea introduced for all professional drivers, claiming that more than 80% of sufferers could be undiagnosed.

Two people, including a teenage boy, have died and two others have been injured in a crash involving three vehicles in Shropshire. Emergency crews were called to the A49 between Church Stretton and Craven Arms at about 2145 BST on Tuesday.

A nine-year-old boy critically injured in a car crash last month has died in hospital.

A boy who was struck and killed by a car after getting off a bus in East Sussex has been named by police. Nine-year-old Henry Nugent, of Newick Road, Brighton, suffered a serious head injury in the accident in Portslade. The accident happened in Chalky Road on Thursday, after he got off the number 1 bus near the community college. The driver of the car, a silver Saab, was uninjured.

A woman who emerged unscathed from a motorway crash has been struck by a car skidding off the road at the same spot as her original accident.

A CHEF killed a teenage girl in a car crash after drinking to celebrate a promotion:

Polish national Adam Harazim, 26, was more than twice the drink-drive limit when he lost control at a roundabout and ploughed into a wall. The car overtook other vehicles at high speed on Dunkeld Road before Harazim hit the roundabout and wall at around 53mph and the vehicle somersaulted and landed upright. Lord Bracadale deferred sentence for reports and allowed Harazim to remain on bail.

A DRIVER who mowed down and killed a mum after falling asleep at the wheel has been jailed for three years. William Duncan hit Doreen McGregor, 31, as she tended her ill son on the hard shoulder of the M80 near Stirling. Doreen's husband Mark was also left badly injured and their three children all required hospital treatment. Duncan, 57, was found guilty of causing death by dangerous driving at the High Court in Glasgow last month. Judge Ian Peebles QC yesterday said there were no exceptional circumstances for him not to impose custody but added the incident was at the "lower end" of seriousness for such an offence. First offender Duncan, of Aberdeen, was also banned from driving for five years.

A wealthy businessman who gave millions away to the poor

died in a car crash after taking cocaine, an inquest heard. Mr Dunner lost control of his Bentley Arnage overtaking another vehicle at 80mph.He careered off the road and ploughed into a tree, dying instantly from severe chest injuries. Dr Sharp said studies had shown the effects of taking cocaine before driving can lead to speeding, loss of control, causing collisions and high risk, inattentive driving.

A biker has been caught doing more than 140mph:

Lewis Matanle, 38, from Marine Crescent, Whitstable, was clocked by a speed camera at 146mph – the highest recorded by a mobile camera in the county. He was riding his Suzuki Gsxr 750 on the A2 towards Dover on October 6 last year, when his speed was recorded at more than double the legal limit. The area, near the junction for Womenswold, has been a site for the safety van since 2005 because seven people have been killed or injured there in speed-related crashes.

Motorists are paying four times more in speeding fines than when Labour came to power, according to figures obtained by the Tories. They show that drivers are now paying £200 a minute to the public purse, prompting the Tories to accuse the Government of treating them as " cash cows." In 1997, when Labour came to power, there were 712,753 speeding tickets issued as a result of motorists being caught by camera and police patrols. By 2006, according to figures released by the Home Office in a Commons written reply, this had soared to 1,773,412.

Tory police reform spokesman David Ruffley, who obtained the data, accused ministers of treating motorists like 'cash cows'. (No, Mr Ruffley. If you don’t break the speed limit you don’t get a ticket. It is not ‘motorists’ who pay but lawless and dangerous motorists.)

Calls have been made to improve the system of catching speeding drivers in the UK as thousands of foreign motorists get away with paying fines every year.

Looking ahead, why not play flooded cities?
Posted by freewheeler at 10:19