“Probably the best single cycle facility in the borough”

This is the view of the Waltham Forest Cycling Campaign (WFCC), expressed on its website.

The WFCC statement above is a classic expression of the segregationist school of thought. This basically regards roads and traffic as dangerous and seeks to isolate cyclists from motor vehicles, by providing off-road cycle lanes, underpasses and other separate facilities. This is opposed by integrationists, who argue that it was the road lobby which first dreamed up the idea of segregating cyclists from motor vehicles. The road lobby wants cyclists on pavements (‘shared use’) or away from the road altogether, leaving the carriageway free for motor traffic. The concept of a ‘London Cycling Network’ is subjected to blistering criticism here and there are also some good criticisms of cycle lanes here and an American perspective here.

On this divide I line up with the integrationists. I don't think it is realistic in an urban environment like Greater London to physically segregate cyclists from motor traffic. I think the cycling community should be confronting the source of road danger, not evading it. Presumably one reason why WFCC doesn’t link to this blog is that I regard their iconic underpass network as both dangerous and crappy, with major design flaws.

[Please note. I have since changed my mind and lost my faith in vehicular cycling.]

Me, I find it incredible that WFCC should enthusiastically embrace the idea of sending cyclists down into a circuitous, incoherently-signed subterranean labyrinth of badly designed and maintained cycle lanes, in order to free up the Crooked Billet roundabout for speeding motorists.

What is even more bizarre about the position taken by WFCC is that the Council’s own figures show that in the eight years between 1998 and 2007 cycling numbers actually decreased at the Crooked Billet underpass.

The following 7am to 7pm cycle counts undertaken along the North Circular Road screenline.

Got that? While cycling in London has generally risen, sometimes quite dramatically, cycling numbers fell at the Crooked Billet underpass over a nine year period. This underpass system is actually suppressing cycling.

Why don’t cyclists like using the Crooked Billet underpass? The main reason is perhaps the fear of being attacked. You are out of sight of other people in a lonely, threatening location and vulnerable to assault.

MAN HAS HIS ARM BROKEN BY THUGS IN UNDERPASS

Police are appealing for witnesses after a man suffered a broken arm when he was set upon in an apparently motiveless attack. As the 22 year-old went into the Crooked Billet underpass, two men pulled him to the ground and began to kick him.

And if you are cycling from Chingford towards the underpass, facilities like this and this don’t exactly encourage use of this route.

Here are some pics I took on Saturday at Probably the best single cycle facility in the borough. This top cycling facility incorporates all kinds of crap - litter, broken glass and flytipping, including this legendary council 'black box' containing an empty Bacardi bottle and other artefacts from a civilisation rapidly approaching self-extinction through climate catastrophe. It's been there so long it's blending in nicely with the environment. 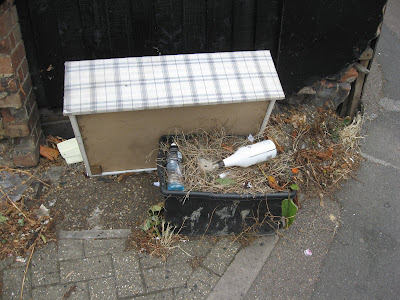 I spotted three signs pointing in precisely the wrong direction, this is one of them. Presumably twisted round by someone having a larf. 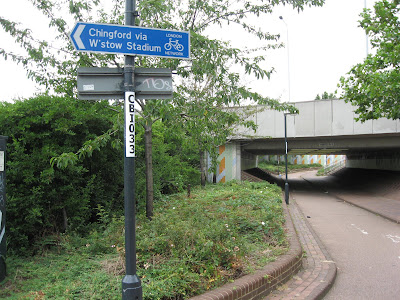 Crap maintenance of the markings: 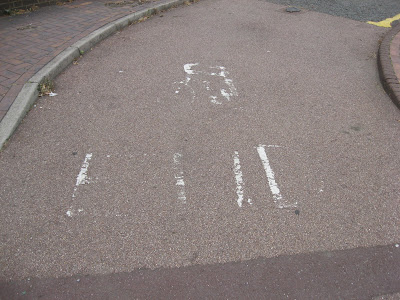 The signing is crap. At this T-junction which directions go where? You aren't told. 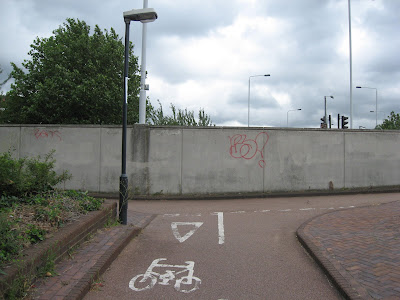 Broken glass, supermarket trolleys, lengths of piping... But no cyclists. Except me. 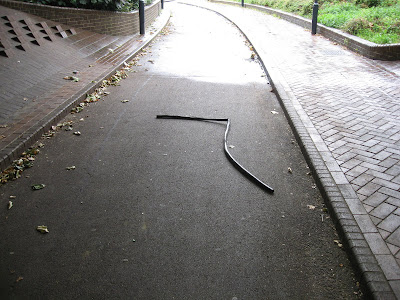 Posted by freewheeler at 07:38