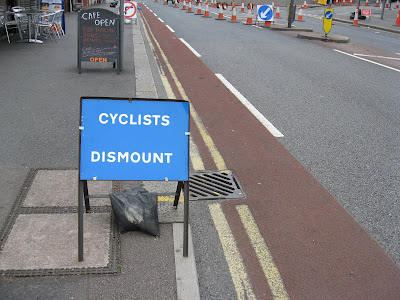 This sign says it all. Roadworks in the centre of the carriageway force motor vehicles into the cycle lane, which remains unobstructed for cyclists. (Forest Road at the junction with Kenilworth Avenue E17)

Instead of putting up a large sign reading SLOW - CAUTION - GIVE WAY TO CYCLISTS, the contractors put up a sign instructing cyclists to dismount and get out of the way of drivers.

I expect if a cyclist is run down and killed here by one of the innumerable drivers who break the speed limit every day on Forest Road, or who can be seen chattering into handheld mobiles, the police and the Crown Prosecution Service will blame the cyclist and exonerate the driver. Because the cyclist didn't dismount.
Posted by freewheeler at 14:15