Austrian tourist harassed in Walthamstow for taking photographs of buses 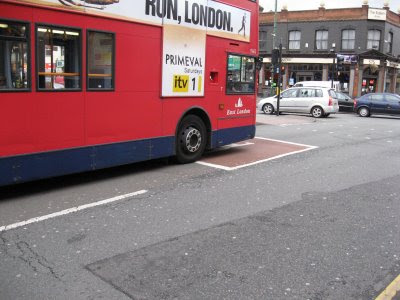 During a recent visit to London I had a nasty incident, which killed interest in any further trips to this city. As I was taking pictures of double-decker buses with my son, we were approached by two policemen. First, we were told that it is forbidden to take pictures of anything in conjunction with transport. Then our names, passport numbers and London hotel address were noted. After that we were forced to delete all pictures that included any transport - even pictures of the new underground station in Vauxhall, which is a modern sculpture! Klaus Matzka, Vienna, Austria

The paper tracked down Mr Matzka:

He said he would not return to London again after the incident, which took place last week in central Walthamstow, in north-east London.

My guess is that the two individuals who harassed him were not police officers but PCSOs, who seem to spend a lot of time hanging around the bus station.

Mr Matzka naturally did not know that neither a PCSO nor a police officer has the right to demand to see any photographs you have taken, has no right to demand the deletion of photographs, and cannot take your camera off you without a court order. Nor is it an offence to take a photograph in a public place. But this kind of bullying of harmless photographers is now commonplace across Britain. In another incident this week

A man was detained as a terrorist suspect for taking a photo of a police car being driven erratically across a public park. Malcolm Sleath, who is chairman of his local park society, was stopped by two officers and told he had breached Section 44 of the Terrorism Act.

Whether it’s taking film from photographers’ cameras or kettling innocent and guilty together for hours without food, water or loos, the police are overreaching themselves and making the streets of London less pleasant and often less safe.

Local lawbreakers who are not harassed are, of course, drivers. The Advanced Stop Line for cyclists by the Walthamstow bus station exit is obstructed all day long by lawless drivers, to the complete indifference of Commander Mark Benbow and his force. And a couple of PCSOs standing on Hoe Street would have little difficulty in taking down the details of scores of drivers passing by chatting on handheld mobile phones. But that kind of crime is of little or no interest to the Met, which makes it all the more peculiar that its heavy-handed policing of demonstrations purports to be motivated by a concern for public safety. The Met certainly isn’t ‘working for a safer London.’ If it was, it would make enforcement of road traffic law one its top policing priorities. 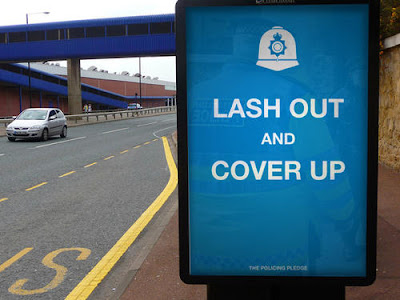 The photo above is borrowed from this architecture blog.
Posted by freewheeler at 09:53